8 Interesting Facts About the Arizona Rangers

The bigger, older, and more legendary Texas Rangers may get all the glory, yet the small and mighty Arizona Rangers, who were active only from 1901 to 1909, deserve a prominent spot in the history of the Old West.

This top-notch law enforcement organization was instrumental in cleaning up the train robberies, violent killings, cattle rustling, and stagecoach heists that plagued the Arizona Territory, thus paving the way for its statehood.

An elite, highly trained team of brave men, the Arizona Rangers prided themselves on their integrity and honesty. By disassociating themselves from the politics of the territory, the group managed to avoid the corruption that troubled the Texas Rangers.

Here are 8 interesting facts about the short-lived law enforcement organization known as the Arizona Rangers.

1. Railroad barons, mine owners, and cattle ranchers pushed for the formation of the Arizona Rangers.

Crime and violence were rampant in the Arizona Territory at the turn of the century. Bank, stagecoach, and train robberies were common. Gambling and drinking led to fights, brawls, and shootings.

One of the biggest problems, however, was cattle rustling.

The businessmen of the region — bank owners, ranch owners, railroad barons, and mining company investors — grew fed up with the thefts and crimes. They pressured the territorial governor of Arizona, Nathan Oakes Murphy, for the formation of a law enforcement entity.

The territorial legislative assembly agreed, but they had their own reasons. If Arizona’s bid for statehood was ever going to be granted, they thought, it would need to clean up its unsavory and violent reputation. Governor Murphy persuaded the lawmakers to not only approve the formation of the Arizona Rangers, but to fund them, too.

By a legislative act, the Arizona Rangers were established on March 21, 1901. The Arizona Rangers followed the formula that the Texas Rangers developed. At the top was a captain, and beneath him was a sergeant, with twelve privates at the bottom rung.

2. Early Arizona Rangers were recruited from the Rough Riders.

The first captain of the Arizona Rangers was a rancher, as we will see later. The second captain, Thomas Rynning, had a solid military background. In addition to being an enlisted member of the Eighth Cavalry, Rynning rode alongside Theodore Roosevelt as one of the famed Rough Riders.

Two years after the formation of the Arizona Rangers, the territory legislation expanded the law enforcement unit to number 26 men. A lieutenant position was added beneath the captain and the number of sergeants was increased from one to four, and the number of privates went from twelve to twenty. 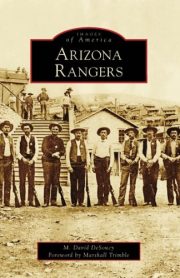 “This slender volume offers a fine selection of photos of the famed, if not shortly lived Arizona Rangers. DeSoucy’s book also covers the story of the modern volunteer Arizona Rangers, which have helped keep the peace for many years now.”
– Amazon review

3. The Arizona Rangers were well-funded, well-equipped, and well-trained.

The legislative act also established the pay structure for members of the Arizona Rangers. Top pay, naturally, went to the captain. He received $120 per month. The sergeant was hired in at $75 per month. Each of the privates earned a monthly salary of $55.

In addition, the Territory of Arizona supplied the Arizona Rangers with the supplies and ammunition they needed. Each ranger, however, needed to supply his own horse, his own camping equipment, and six pistols. If a ranger’s horse was killed in the line of duty, the territorial government would replace it at no cost to the ranger.

After its first year of existence, and under the leadership of its second captain, Thomas Rynning, a training program for the Arizona Rangers was put into place. Rynning, drawing heavily on his own army training, understood the value of training exercises to not only prepare the men for the challenges they would face, but to firmly establish the chain of command and respect for authority.

Much of the success of the Arizona Rangers was because of this training. There were no rogue rangers bucking the system and causing dissention in the ranks — issues common with the Texas Rangers.

4. The first captain of the Arizona Rangers was a rancher who thwarted cattle rustlers.

Burton C. Mossman was tapped to be the first captain of the Arizona Rangers. He assumed the position on August 30, 1901. Unlike his two successors, Mossman had no background in law enforcement or the military. He was a cattleman.

As the superintendent of the Aztec Land and Cattle Company in northern Arizona, he supervised the two-million-acre operation. He was surprisingly successful in preventing cattle rustling for his employer. In addition, he was fluent in Spanish and skilled as a horseman. This made him a good choice to lead the Arizona Rangers.

Mossman only served as the ranger’s captain for one year. During his tenure, he recruited several deputies and successfully captured more than 100 outlaws. But Mossman was a cattle rancher at heart.

In July of 1901, he resigned from the Arizona Rangers and returned to working in the cattle industry.

In the first few months of its existence, the Arizona Rangers proved their worth.

More than 125 outlaws were apprehended or killed by the rangers. In the eight years that the Arizona Rangers were active, more than 4,000 criminals were arrested. The majority of those people were arrested for stealing horses and cattle. As many as 1,000 of those arrested were charged with serious felonies.

Part of the success of the Arizona Rangers’ arrest record was because the rangers were well acquainted with the region. Many of them were originally from the area. They knew all the hidden canyons, trails, hideouts, and watering holes.

They were successful in undercover operations, as well as ambushes. They were able to sneak up on outlaws unseen. The successes of the Arizona Rangers were well-publicized, and they served as a deterrent.

Because of the rangers, many criminals fled the territory.

Read next: 15 Native American Ruins in Arizona that Offer a Historic Glimpse into the Past

In addition to cattle rustling and stagecoach robberies, the Arizona Rangers were called in to help with several labor disputes that turned violent in the Arizona Territory.

In 1903, disputes broke out at a copper mine in Morenci, Arizona, over wages and hours. The disputes threatened to turn violent, so the territorial government of Arizona ordered the Arizona Rangers to the scene to keep the peace.

This was the first time in Arizona history that law enforcement was summoned for a labor dispute incident. It was also the only time in the history of the Arizona Rangers that 25 of the 26 members of the rangers all responded together to avert violence and help two parties reach a settlement.

Three years later, in June of 1906, the Arizona Rangers reported to another major labor dispute at a mine in Sonora, Mexico, across the border from Arizona. This labor dispute turned into a violent uprising, causing death and injuries. It was more than the Mexican authorities of the region could handle. The rangers assisted a posse of Mexicans to squelch the riot.

7. The Arizona Rangers had only three captains.

In its short existence, the Arizona Rangers had only three men in the top leadership role.

Burton Mossman served as the organization’s captain for its first year before returning to his former job in the cattle industry. Thomas Rynning was the group’s captain from 1902 to 1907. When he departed from the rangers, he took a job as a prison warden.

The third and final Arizona Ranger captain was Harry C. Wheeler. Wheeler truly moved up the ranks of the organization. He had the distinction of being the only man to have served in all ranks within the ranger organization, from private to captain.

A stickler for honesty and integrity, Wheeler developed a code of conduct for the Arizona Rangers which helped to keep the law enforcement group from descending into corruption.

Crime, especially cattle rustling and horse theft, was greatly reduced. The territory of Arizona went from a largely lawless place to one where criminal activity was quickly and swiftly dealt with.

The Arizona Rangers were disbanded, but not forgotten.

Decades later, in 1957, a group of former Arizona Rangers helped to resurrect the iconic law enforcement organization. This new version of the rangers is a volunteer organization that provides law enforcement support as a civilian auxiliary group. They work in cooperation with federal, state, and local law enforcement agencies, as well as hosting community and youth outreach programs.

In 2002, more than a century after its inception, Jane Hull, Arizona’s governor, signed an act of legislation that officially recognized the Arizona Rangers as a supplemental law enforcement agency in the state.

Read more about lawmen and pioneers of the West: