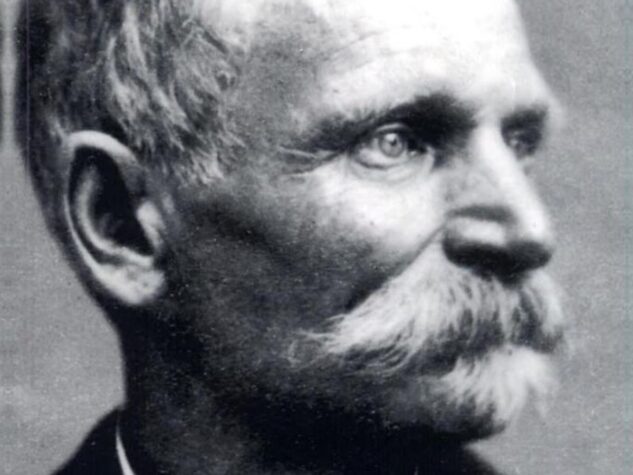 When it comes to Old West outlaws, few were as colorful and creative as Black Bart.

This gentleman bandit was a Robin Hood-like character, without the band of Merry Men or “giving to the poor” thing.

He had a stick-it-to-the-man attitude, fueled by revenge, that he aimed toward Wells, Fargo & Company via a series of successful stagecoach heists in Northern California and southern Oregon in the 1870s and 1880s.

So, what makes Black Bart stand out from the crowd of other Wild West outlaws? Let’s look at eight reasons why Black Bart was an Old West original.

1. Black Bart wasn’t black, nor was he named Bart.

The outlaw we now know as Black Bart was not African American, as his name might suggest, nor was he named Bart. His real name was Charles E. Boles and he was an English-born white guy whose parents immigrated to the U.S. in 1831 when he was two-years-old.

The family purchased a farm in Jefferson County, New York, where Charles grew up with his five brothers and three sisters – none of whom were named Bart. So where did the Black Bart moniker come from?

Most likely, Charles Boles stole the Black Bart name just as he stole loot from Wells Fargo stagecoaches. In the 1800s, adventure stories were all the rage. Sensationalized exploits of cowboys and criminals appeared in dime novels and as serial stories in newspapers published around the country.

The Sacramento Union published a serial tale in the early 1870s that was titled “The Case of Summerfield” by William Henry Rhodes using the pen name Caxton. The story’s villain was a man named Black Bart who had long, unkempt hair, wore a long, black coat, and a habit of holding up Wells Fargo stagecoaches (remember those details…they will be important later).

Upon his arrest (spoiler alert: Black Bart gets caught), Boles told the authorities that after he wrote his first poem (yes, he was an outlaw poet), he needed a name to sign the verse.

“Black Bart” was the first name that popped into his head. Boles never admitted to taking the name from the Sacramento Union’s story, but he most certainly had read it.

He was, after all, in the right place at the right time.

Charles Boles and two of his brothers were among the roughly 300,000 people who raced to California during the Gold Rush of 1849. The trio took up prospecting along the North Fork of the America River, not far from Sacramento.

Boles and his brothers were also among the roughly 299,995 people who didn’t strike it rich in California. In fact, both brothers fell ill and died. Charles stayed around long enough to get married in 1854 to a woman named Mary Elizabeth Johnson. When the Civil War broke out, the couple was living in Decatur, Illinois, with their four kids.

Charles Boles joined Company B of the 116th Illinois Regiment on August 13, 1862, as a private and made the rank of first sergeant within a few months. He participated in Sherman’s famous March to the Sea and the Battle of Vicksburg, where he was severely injured. He recovered from his wounds and was discharged in June 1865. 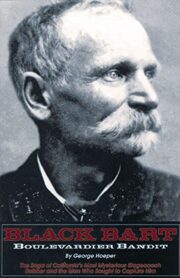 Black Bart, Boulevardier Bandit: The Saga of California’s Most Mysterious Stagecoach Robber and the Men Who Sought to Capture Him

“This biography is well written, good bedtime reading. It answered many of my questions about Black Bart.”

Boles left his wife and kids behind in 1867 and headed to Montana and Idaho in another attempt to strike a rich vein of gold. He sent letters back to his wife and in one, dated August of 1871, he mentioned a run-in with agents from Wells, Fargo & Company that had him riled up.

In the letter, Boles vowed revenge against Wells Fargo, probably writing it with his fist in the air. This was the last time his wife heard from him. It is not clear what happened to set him on his path of revenge, but historians and Black Bart fans point to this letter as the impetus for the 28 stagecoach robberies he pulled off between 1875 and 1883.

4. Black Bart duped his way through his first stagecoach heist.

Adopting the name Black Bart, Boles pulled off his first stagecoach heist on July 26, 1875, in Calaveras County, California. He stopped the coach in a secluded spot and firmly but politely ordered the driver, John Shine, to hand over the strongbox full of cash.

Black Bart didn’t brandish a gun in the robbery, but he shouted over his shoulder for his men to “give him a solid volley, boys” if Shine tried to shoot him. Shine looked out into the surrounding brush and observed several rifle barrels pointing at him.

After Black Bart made off with the loot – about $160, which was big bucks in those days – Shine noticed that the gun barrels were still sticking out from the bushes. He investigated and found that Black Bart had been working alone. The rifle barrels were merely propped up with sticks to give the appearance that he had the stagecoach surrounded.

Surprisingly, the driver, John Shine, told the truth about the heist to his bosses at Wells-Fargo when he could have made himself seem less cowardly by perpetuating the story that Black Bart had a gang of thugs working with him.

“Not content with robbing the stage on October 2,1878, on the Cahto-Ukiah line, the robber struck the next day and held up the stage on the Cavelo-Potter-Ukiah line. Today there is a large rock between Ukiah and Willits, California, which is called “Black Bart Rock[.]” He used to hide behind this rock and hold up the stages in that area. Black Bart used to keep a room at the Commercial Hotel in Ukiah, and when this building was torn down in the 1930’s, a pencil drawing signed Black Bart on the back side was found therein.”

5. He had a gentlemanly demeanor and a fearsome appearance.

To look the part of the Black Bart outlaw, Charles Boles let his hair grow long and wild. He donned an ominous long, black duster – the precursor to the black trench coat – and spoke in a deep, menacing voice.

With eye holes cut out, he put a cloth flour sack over his head and wore a black hat. He probably looked like an Old West version of Albert Wesker from Resident Evil or Neo from The Matrix, mixed with Sam from that horror movie, Trick ‘r Treat.

His actions, however, didn’t match his fearsome appearance.

Black Bart was polite and considerate. He hated swearing and avoided cursing. He also didn’t like guns. He never shot a gun in any of the 28 of his stagecoach robberies of his outlaw career.

Charles Boles had another odd quirk that made him stand out from other Old West outlaws. He was afraid of horses.

While his contemporaries rode up on their victims on the backs of their trusty steeds – and more importantly, rode away to safety after the robbery – Boles pulled off his crimes on foot.

And, amazingly, he got away on foot too.

6. Black Bart was an outlaw poet.

In between stagecoach heists, Black Bart apparently passed the time by composing poetry. Seriously. That doesn’t really seem like a bad-ass hobby in today’s world, but cowboy poetry was a masculine distraction in the 1880s.

Black Bart left two poems behind at two of his Wells Fargo stagecoach robberies. In the first one, he even broke his no-swearing rule and delivered one of the best motives for robbery ever set to verse.

For honor, and from riches.

But on my corns too long you’ve tread,

You fine-haired sons of bitches.

The second poem, which was left at the scene of his July, 1878 heist, was a bit longer and seemed to hint at his weariness with his career choice.

Here I lay me down to sleep

To wait the coming morrow,

Let come what will, I’ll try it on,

My condition can’t be worse;

And if there’s money in that box

‘Tis munny in my purse.

7. He was eventually busted.

Unbeknownst to him, the driver had stopped to let a teenager named Jimmy Rolleri off. Rolleri had his rifle and hoped to do some hunting along a direct path to a ferry crossing while the stagecoach took the long way around a hill.

He intended to catch up to the stagecoach at the river. When he arrived, however, he witnessed Black Bart holding up the coach. Rolleri fired at the bandit, striking him in the hand as he fled. Rolleri and the stagecoach driver followed the trail of blood through the bushes and found a bloody handkerchief with a laundry mark on it.

James B. Hume, a detective with Wells Fargo, was assigned to the case. He visited more than 75 laundries in the San Francisco area in his effort to track down the laundry mark.

When he finally found the right laundry, the detective learned that the handkerchief belonged to a regular customer, a man who had long, dark, unbrushed hair. The laundry workers pointed the detective toward the boarding house where Black Bart was apprehended.

For some reason, Wells Fargo decided to only press charges against Black Bart for the last stagecoach robbery, not the 27 previous ones he committed. Lucky for him. He was sentenced to six years in San Quentin, but he only served four.

Always a gentleman, Boles was released early for good behavior. Upon his release, a newspaper journalist asked him if he planned to continue his life of crime. Boles replied, “No, gentlemen, I’m through with crime.”

8. Black Bar may have moved to Japan.

It wasn’t unheard of for Old West outlaws to retire to a foreign country (I’m looking at you, Butch Cassidy and the Sundance Kid). Not long after Black Bart’s release from prison, he simply disappeared.

He had written letters in which he claimed Wells Fargo was still after him and that he wanted to get away from everything. He could have become a bit paranoid in his old age, or Wells Fargo could have really had him under surveillance.

The last confirmed sighting of the outlaw formerly known as Black Bart occurred on February 28, 1888. After that, his trail went cold. Some folks claimed he settled in Marysville, California, and worked as a pharmacist.

But one of the Wells Fargo detectives who questioned Black Bart after his arrest recalled how Boles once commented that he planned to move to Japan upon his release.

During his crime spree, Boles stole roughly $1,000 per year, but he lived in a run-down boarding house and wore the same coat for years. The theory is that he had stashed his ill-gotten cash like a pirate burying his treasure and used that to fund his golden years in far-off Japan.

From his fear of horses to his poetry writing, Charles Boles, as Black Bart, was a different breed of Old West outlaw. He didn’t have a gang like Jesse James and didn’t shoot his victims like Billy the Kid.

He didn’t rob willy-nilly; he targeted only Wells Fargo stagecoaches. He was proof that Old West outlaws were not cookie-cutter stereotypes, but unique and complex individuals.