7 Facts You May Not Know About the Conestoga Wagon 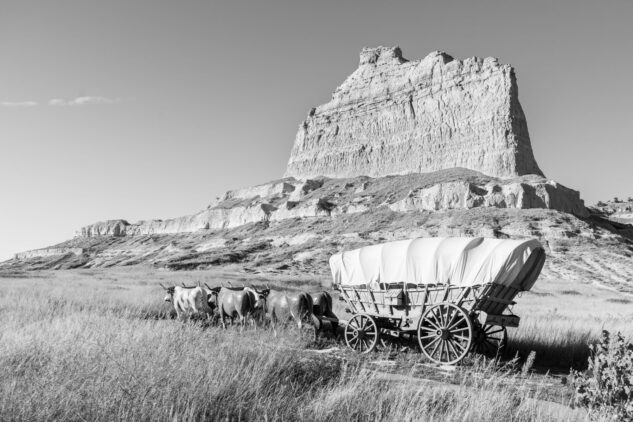 The Conestoga wagon was an icon of Western expansion, but it is often misunderstood.

Conestoga wagons were important to the history of the United States, but not in the way most people think. When one thinks about western migration and settlement in the 1800s, there usually is an indelible image of long lines of canvassed wagons rambling along the Great Plains.

This image is partially true, but when you ask a layman what type of wagon these settlers were driving, they’d most likely respond that it was a Conestoga wagon. This is a misconception. Conestoga wagons are often thought to be the wagon of the Old West, but they were one among many.

Let’s take a look at some of the other truths of the Conestoga wagon by looking at seven details about its design and history.

1. The Conestoga was developed in the 18th century by the Mennonites.

The Conestoga wagon was first developed by Mennonites, a Christian sect who originated from the Netherlands and Switzerland in the 16th century. The Mennonites were considered radical for mainstream Protestantism. For example, one difference from the mainstream was that they did not baptize children. As a result, they were persecuted in Europe and escaped to North America starting in the 18th century.

A significant population of Mennonites settled in the region about the Conestoga River valley in Lancaster County, Pennsylvania, thus becoming one of the groups known as the Pennsylvania Dutch.

They began to prosper and had an excess of goods such as meat, grain, and coal that could be sold in urban markets. However, the main markets for these commodities was on the Atlantic coast in cities such as Philadelphia, Boston, and New York.

What the Mennonites needed was a heavy duty wagon that could take large hauls of goods hundreds of miles. Around 1750, somebody, and nobody knows who, developed a wagon for that purpose.

Conestoga wagons were designed in an era before paved roads or even macadam. They were fashioned like ships, with sloping floors that created a valley in the middle of the bed. The ends of the wagon were about one foot higher than the interior deck.

This allowed cargo to naturally settle inward of the wagon rather than being pitched overboard when going down or up a steep grade. It was perfect for preventing barrels from rolling out of the wagon. This also gave the wagons its ship-like appearance, which made it famous.

This look was furthered by the sail-like canvas top which was supported by hickory hoops. These wagons were reputedly called the “East Indiamen of the road” or also called the “inland ship of commerce.”

Another feature of the Conestoga was its wheel and axle system. The wagon wheels were high, up to six feet in the rear. This allowed the axle and carriage to clear obstacles such as tree stumps or avoid getting stuck during a river crossing.

These wheels were typically made of oak rims supported by hickory spokes. The tires could be as wide as eight inches. The entire frame was usually made of seasoned white oak or poplar wood. 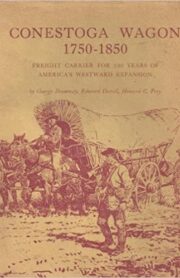 “Well illustrated and full of information. Has dimensions of the various wagons in the photos, or which are discussed.”

3. The Conestoga wagon was a heavy hauler.

Conestoga wagons were built large to carry as much freight as possible. A typical wagon could weigh up to 4,000 pounds when unloaded and the largest models of the wagon could carry about six tons of freight.

A wagon measured about 16 feet from end to end and had a continuous width which never exceeded four feet. The wagons also had built into them several accoutrements which helped to support its purpose as a heavy-haul vehicle.

For example, the wagon had a good braking system (for the 19th century), since rushing downhill with six tons of cargo could get out of control easily. These worked by operating a long iron handle that engaged the brakes when pressed down.

This was operated by the driver, who could sit or stand upon the “lazy board” and reach the brake. Typically, drivers walked but stayed on the left, where there was not only the brake, but a toolbox and axe. All of these were within easy reach. Wagons were usually driven by professional teamsters who made up their own subculture.

Wagons could make for about 20 miles a day on a good road.  Sometimes wagons travelled in long caravans of up to a hundred or more so that when they arrived in cities such as Philadelphia to deliver goods like whiskey, fur, and flour they jammed up the streets.

After unloading, always from the rear, the wagon would then load up with finished goods to deliver to the frontier.

Related read: The Fighting Men & Women of the Fetterman Massacre

Let’s say you bought a newly minted Conestoga wagon straight from the wagon dealership. What you’d be getting was not only highly practical, but could arguably be called a work of frontier art.

The wagon body was painted a blue almost akin to what one historian opined was a “peacock blue.” The wheels and gear were all a sharp red while the metalwork was black. The toolbox often sported carvings of such things as hearts, snakes, and flowers.

It was after the opening of the National Road that the wagon really took off, with some 5,000 wagons using the route per day. Interestingly, because of the setup of the lazy board and equipment on the left side of the wagon, the driver always walked on the left.

This meant that when on the road, they would move to the right. This may have been the origin of why in the United States, drivers drive on the right side of the road.

Because of the size and weight of Conestoga wagons, they needed powerful draft animals to haul them. Conestoga horses were specially bred for this purpose.

In fact, the Conestoga may have been the first horse breed developed in what would become the United States. The specific lineage of the breed is not entirely known, but it has been speculated that some of the founding individuals came from Asiatic warhorses used by the conqueror Tamerlane.

An individual Conestoga horse was black or bay in color with a weight of about 1,650 pounds and a height of 16.3 hands (5.4 feet). These horses had a docile disposition which, when combined with their strength made them excellent haulers.

Typically, a Conestoga wagon required four horses at minimum, and heavy cargoes and large wagons might need as many as eight. These horses were often used in the East, but in the West, Conestoga wagons employed oxen since the horses could not cope with the vast distances of the Great Plains or the steep grade of the Rocky Mountains.

The horses usually were affixed with bells and the sound of those bells were long remembered as the mark of a Conestoga wagon. All the horses wore bells, except the one on the left toward the wheel, since it could entangle with the rein or whip.

They ate from a feeding trough connected to the wagon.

6. Conestoga wagons were used on the Oregon Trail, but not extensively.

One common misconception of the Conestoga wagon was that it was the primary means of travel by 19th century migrants on the Oregon Trail. This is a bit of a mischaracterization.

The Conestoga was one of many wagon types used during Western settlement. In the early days of settlement, particularly to the Northwest Territory, the wagon was used. Often passengers were charged for travel by weight, the same as freight.

Conestogas were called Pittsburgh wagons in the West or Hoosier wagons in Indiana and they were frequently used by settlers. However, it soon became obvious that the wagon’s bulk and weight was a liability for settlers through such long distance travel.

While the wagon took the punishment, it required too many animals, was too expensive to build when compared to simpler wagons, and its curving insides made for an uncomfortable ride. Once Oregon trail landmarks, settlers were more likely to use other “prairie schooners” such as flat-bedded Murphy wagons, Studebaker wagons, or even handcarts.

7. The Conestoga wagon was supplanted by changing technology.

For the first half of the 19th century, the Conestoga wagon formed the bond between rural and urban regions in the young country.

However, by mid-century, the wagon had fallen into decline. This was mainly due to technological innovations which impacted transportation. Extensive canal systems proved to be cheaper than Conestoga wagons which first drove them into decline.

This was furthered by the explosion in railroads starting in the 1830s. With goods being able to move to market cheaper and faster, the wagon gradually faded away. However, in some places, the use of the Conestoga wagon continued on until the 20th century. Sublette Cutoff, a section of the Oregon trail, had wagons rambling along it until 1912.

Today, Conestogas are available to see in many museums and offer an imaginative look into America’s past.