Everything You Need to Know About Cowboy Chaps 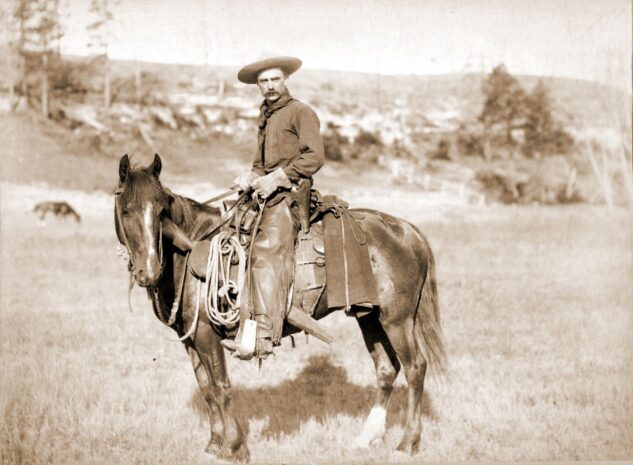 There is an indelible image of the cowboy: the wide-brimmed hat whose color hinges on one’s ethical alignment. The stylish boots, complete with stirrups to help one ride the range.

There is a holster bound casually on the waist or hung over the shoulder carrying the essential peacemaker.

But for real authenticity – for the real style of the Old West – you must wear chaps.

Chaps at the most elementary level are leggings which are held together through lacing or a belt. From there, chaps go off into different directions of styles and also variety of purposes.

Yet what people do not know is that chaps, aside from being a symbol of cowboyhood, are an emblem of cultural exchange and an icon of the meandering history of the Old West.

Let’s take a deep dive at this essential cowboy accessory.

Why do cowboys wear chaps?

Nowadays, chaps may seem like an unneeded accoutrement that serves no obvious purpose except to enhance one’s legs. However, these articles of clothing were created for real world purposes.

The World of the American West notes that cowhands in the Old West often worked in rugged terrain, where it was very typical to brush up against cacti or rocks. Thorny vegetation like mesquite was commonplace. This made chaps essential in providing adequate protection for the legs.

The Modern Cowboy notes that chaps can save a rider’s legs when a horse comes too close to a barbed wire fence – which apparently some horses do on purpose to intimidate their riders. Since there was no crotch, they could easily be slipped on over a person’s trousers. They were in essence a form of armor.

While serving as armor was its primary purpose, wearing chaps also had a number of secondary benefits. It provided an additional layer of warmth and dryness needed during some of the bitter winters on the trail.

Since most chaps were made of leather, it was found that this allowed a rider to hold his seat on a leather saddle much better than if he were just wearing cloth trousers. 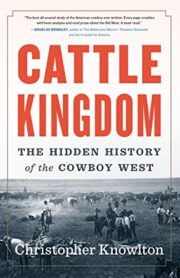 Cattle Kingdom: The Hidden History of the Cowboy West

“Though I started this book with some wariness, by the end, I was deeply satisfied. There is nothing amateurish about it even though written for a popular audience.”

When were chaps invented?

The origin of chaps is somewhat nebulous, though it is fairly certain they were invented by Spanish (later Mexican) vaqueros. Vaqueros are Spanish cowhands. Vaqueros as a term comes from the Spanish word vaca, meaning cow.

After the Spanish arrival and conquest of Mexico starting in 1519, Europeans first used native peoples to drive cattle. Vaqueros were tough, independent, and highly creative. For example, they braided their own rope and made their own saddles.

The first kinds of chaps were called armas.

These were attached to the horse instead of the rider, and acted as a primitive leather shield. They were bulky and increased the difficulty of riding. Vaqueros then introduced armitas which were independent of the horse and tied to the rider’s belt. It shielded the front of the legs.

The earliest rendition of chaps as we know it today was chaparejos (sometimes chaparreras). This is in reference to chaparral or brush, which riders would push through. This is is why, due to the Spanish pronunciation, that chaps are pronounced as “shaps” and not like the stuff you put on your lips when they are dry.

What are chaps made of?

Chaps were made of a variety of materials depending on what was readily available and the terms dictated by the terrain. Normally they were leather. Typically, goat, sheep, deer, bulls, and calves are used for this leather, but really chaps can be made of almost anything.

American Cowboy details that the defining feature of a chap is that they are leggings held together by a thong of leather and offer protection. Function over form was paramount. Thus, a rodeo rider would often wear chaps called woolies which had fur, such as angora on the outside of the leggings.

This was meant to soften a hard landing, but on the range woolies probably offered greater warmth than a standard pair of chaps although they would suffer in the rain.

How did chaps end up in the Old West?

Chaps are an example of cultural diffusion. As the United States expanded west and settled in areas once controlled by Mexico, the benefits of using chaps became immediately evident to newcomers.

Texans, according to American Cowboy, first used buckskin breeches that completely enclosed the leg. Soon this evolved to the earliest style of chap in the Old West called the “shotgun” or sometimes the “Texas leg.”

The shotgun was the first American-style chap and it was also the simplest in form. It consisted of two rather straight leggings that resembled a shotgun, hence its name.

Normally, these chaps were decorated with a fringe. If the chaps were not decorated, it was called “closed-leg.” The design of the shotgun style was tight to the skin. This made it difficult to pull on and off, especially when a cowhand would be wearing boots with spurs.

How many styles of chaps are there?

Aside from the shotgun style, there were also two other main forms of chaps during the Old West. The first is the batwing. American Cowboy details how this style came into popularity around the turn of the century.

It was an open leg design that snapped about the legs rather than being pulled on. As a result, riders would often let some of the snaps hang open allowing the leather wings to flap about, like bats.

These were also said, according to the Cowboy Encyclopedia, to have resembled batwings when laid flat. These wing varieties allowed for greater freedom of leg movement and it is easy to see why they were adopted.

A third style is the wooly. These were often considered the most elaborate and perhaps ostentatious since it was flaunting fur. These were used in a practical sense by riders in Montana, for warmth.

On the other hand, performers say in the Wild West show wore them for sheer style. Conversely, in warmer climates, cowboys would wear a variation of the original Mexican armitas, called chigaderos, but usually just called “chinks” by American cowboys.

This style had shortened legs that extended just below the knee. Today, chaps and chinks can be quite flamboyant and even gaudy, especially when practical considerations retreat in the face of making a fashion statement.

Aside from protection and aside from fashion sensibilities, cowboys also used chaps in unorthodox ways to maintain social order. This refers to the curious activity of “chapping.”

Chapping, simply put, is a cowboy method of hazing or discipline. A Taste of Cowboy details the procedure: a cowhand is held down by his fellows while another takes a pair of chaps and uses them like a broad, leathery whip at the victim’s backside.

While this supposedly is done in good fun, inevitably the person receiving the chapping is held down by his fellows. This procedure was usually performed in three instances. First, if the cowboy fell out of line and needed an attitude adjustment.

It was also seemingly democratic. The Cowboy and His Interpreters provides the example of how when a cowboy insulted the camp cook, the other fellows in his outfit called for a chapping.

Second, it was also used when a person’s birthday was found out. Chapping was no doubt easier to do on the open range where the basic ingredients for a birthday cake were rare or nonexistent.

The third instance is described by Vocabulario Vaquero in which two contestants continually smack each other with chaps until one gives up. The one who concedes is the loser.

What was the social significance of chaps?

In the Old West there were many different kinds of occupations. Admittedly, almost all of these were out-of-doors. When one wore chaps, it was a statement that you were a cowboy. To a boy seeking to be recognized as a man there was no better way than to get your pistol and to wear a pair of chaps.

This type of status even extends to contemporary cowboys. In 2004, John R. Erickson wrote in his 20th century cowboy memoir about the feeling one receives when putting on the chaps.

To me, wearing chaps is one of the little honors of the profession. If you haven’t earned the honor, you appear absurd; but if you have, you become a knight in armor. In this day and time, money will buy you almost anything, including a Brooks Brothers suit, but while you might buy your way into a pair of chaps, you can’t buy the dignity and the pride that goes with them… You might say that what fills a pair of chaps is not two skinny legs, but the quality of the man who wears them.”

Next Up in Old West Reads

According to legend, one sip of the 50-proof whiskey made from rich New Mexico wheat was all it took to make one think he had been struck by lightning.