Curly Bill Brocius: Was He Really Shot and Killed by Wyatt Earp? 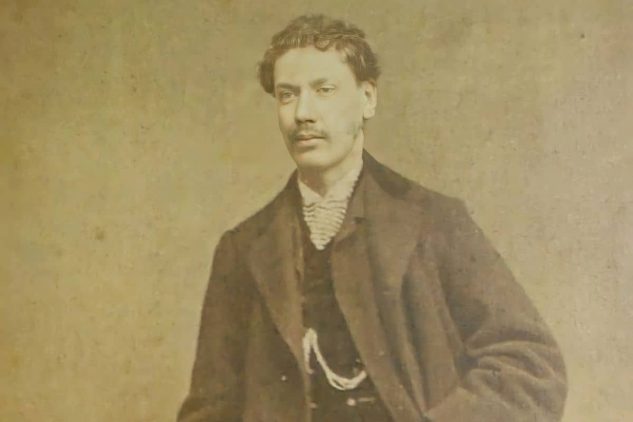 William “Curly Bill” Brocius was only on Arizona’s Old West scene for a little more than three years, but he used that short amount of time to build his reputation as an outlaw, cattle rustler, gang leader, drunkard, and murderer.

In Tombstone, Arizona, in the early 1880s, Curly Bill began a killing spree that started with the town marshal of Tombstone and ended with Wyatt Earp’s brother, Morgan Earp.

Angry, grief-stricken, and filled with vengeance, Wyatt Earp set out on Curly Bill’s trail. Earp returned to Tombstone and announced that on March 24, 1882, he shot and killed Curly Bill Brocius.

The trouble was that Wyatt Earp could be quite the storyteller.

He often told exaggerated accounts, and even outright lies, to paint himself as the hero. There were plenty of people in Tombstone who doubted Earp’s claim. Even today, Old West historians are divided regarding the fate of Curly Bill Brocius.

Did Wyatt Earp exact his revenge for his brother’s murder? Or did Curly Bill slip away to live out his days with a beautiful senorita in Mexico? 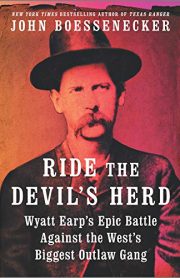 “Boessenecker is honest and thorough in his exposing the bad side of the Earps, but at the end of the day he shows clearly that they were a far cry on every level from the moral depravity of the Cowboys.”
– Douglas Cavanaugh, Amazon review

William Brocius, who was believed to have been born in 1845, came to Arizona in late 1878. Historians believed he arrived from either Missouri or Texas. He had been hired to drive a herd of cattle to the San Carlos Reservation in Arizona.

After he delivered the cattle, he remained at San Carlos Reservation for a short time, working as a ranch hand. He didn’t last in this job long. Soon, he arrived in Tombstone, Arizona, a mining town with a reputation for lawlessness and violence.

It was an ideal place for Curly Bill Brocius, who was known for his quick temper, vicious anger, and hard drinking.

William Brocius’s nickname was a bit of a no-brainer.

All descriptions of him note his dark, curly hair. He was also described as tall, well-built, and with a freckled-face complexion. A photograph alleged to be Brocius, but has not been authenticated, is on display in Tombstone, at the Bird Cage Theater Museum that shows his curly locks. Family members of Curly Bill’s descendants have presented two more photographs of him, but these, too, have not been authenticated.

Most written descriptions of Curly Bill from that time mentioned Brocius’s curls in passing, while focusing more on his personality traits. He was a hard drinker and had a twisted sense of humor.

He once made a preacher “dance” during a Sunday morning sermon by shooting at his feet. Another time, at a community-wide dance, Curly Bill held his gun on a group of Mexicans. He forced them to strip naked and dance in front of everyone. Both of these incidents were reported in local newspapers at the time.

Additionally, they appeared in the memoirs of Fred Dodge, a Wells Fargo agent.

William Brocius wasn’t in Tombstone long when he got into some serious trouble.

According to stories, a very drunk Curly Bill and a group of his equally drunk buddies were firing their pistols into the air in an alley on the evening of October 28, 1880. Fred White, the first town marshal of Tombstone, arrived on the scene to stop the mayhem.

Deputy Sheriff Wyatt Earp was in a nearby saloon and heard the commotion. Earp later stated that he heard Marshal White say to Curly Bill, “Give me your pistol.” As he was handing his weapon to White, it fired, striking White. Earp grabbed Brocius from behind and wrestled him to the ground. He promptly arrested Curly Bill and charged him with murder.

Marshal White did not die immediately. He was taken to a doctor who tried to treat his wounds. White’s condition seemed to be improving, and he was even able to give a statement that cleared Brocius of the charges.

And then his condition worsened. Fred White passed away that evening. The people of Tombstone liked and respected White, and Earp pushed for Brocius to be taken to Tucson to stand trial for murder.

At Curly Bill’s trial, Fred White’s testimony was read to the judge. In it, the marshal had stated that he believed the gun fired accidentally. Even Wyatt Earp testified that he thought the shooting was accidental.

The judge acquitted Brocius of the murder charges and he was released. Although he made an enemy of Wyatt Earp later, this incident did not seem to spark their famous feud.

Curly Bill and the Clanton Gang

The Clanton Gang, a band of cattle-rustling, stagecoach-robbing gunslingers, had long made Tombstone their base of operations. Led by Newman “Old Man” Clanton, the gang also included Clanton’s three sons Billy, Ike, and Phin, as well as the McLaury brothers – Tom and Frank – and assorted other outlaw characters. For a time, Curly Bill Brocius was a member of the Clanton Gang, though he did not participate in the Shootout at the O.K. Corral in October 1881.

A few months before this famous gunfight, in July of 1881, Curly Bill Brocius and Johnny Ringo, another Clanton Gang member, tracked down and killed Isaac and William Haslett in New Mexico. These killings were done purely for revenge. The Haslett brothers had killed two other Clanton members during a botched robbery of a general store weeks earlier.

Curly Bill and the Clanton Gang were on a murderous streak leading up to the Shootout at the O.K. Corral. Just weeks before, Curly Bill led a group of outlaws on a deadly ambush in the San Luis Pass. Brocius and his men attacked a group of Mexicans, and six were killed in the initial attack. The remaining eight Mexicans were tortured and murdered by Brocius.

Curly Bill took over as leader of the Clanton Gang when Old Man Clanton was killed in yet another murderous rampage shortly after the San Luis Pass incident.

Curly Bill and the Earp Brothers

Even though Curly Bill Brocius was not involved in the Shootout at the O.K. Corral, the event involved his gang of outlaws. Naturally, he was outraged at the deaths of his gang members at the hands of the Earp Brothers.

That hatred only increased when, in early January, 1882, Curly Bill robbed two stagecoaches leaving Tombstone. Wyatt Earp formed a posse and set out to hunt down the Clanton Gang members.

Tensions escalated between the Clanton Gang and the Earp Brothers, and the lawmen felt the threats. Virgil Earp was returning to his room at a Tombstone boarding house from a night at a local saloon at 11:30 p.m. on December 28, 1881, when shots rang out.

Three gunmen, hiding in an unfinished building across the street, fired at Virgil Earp. Earp, hit in the back and the left arm, staggered into a hotel. Although he was severely injured in the assassination attempt, Virgil survived. His arm was permanently disabled from his injuries.

Then, on the evening of March 18, 1882, Morgan Earp was playing billiards at a Tombstone billiard parlor when assassins, reportedly members of the Clanton Gang, fired through the window. A bullet narrowly missed Wyatt Earp but struck his brother, Morgan, in the spine.

To be clear, it has never been proven that Curly Bill was behind the assassination attempt on Virgil Earp or the assassination of Morgan Earp, but it was common knowledge that the Clanton Gang was responsible for the attacks.

These two incidents led to the Earp Vendetta Ride.

The Killing of Curly Bill

Wyatt Earp and a posse of lawmen set out to hunt down the members of the Clanton Gang.

If anyone asked, the goal of the posse was to apprehend the outlaws and bring them to justice. However, Earp had witnessed the outlaws being set free by corrupt judges, and he intended to inflict vigilante justice on the gang.

According to Earp’s own account of the events, his posse serendipitously ran into Curly Bill and the Clanton Gang on March 24. Both parties surprised each other at the same watering hole in the Whetstone Mountains.

Weapons were drawn. Earp claimed Curly Bill fired first, and his bullet allegedly came so close to wounding Earp that it left a hole in his coat. Earp fired back with two blasts from his shotgun. Both bullets struck Curly Bill and, as Earp later recounted, nearly split Brocius in two.

That was the official report of the death of Curly Bill Brocius, but the validity of the story has been called into question. Wyatt Earp had a tendency to exaggerate his reports and present details that made him look more noble and heroic.

There were really no witnesses to back up Earp’s story. When the shooting started, Earp’s posse fled, and the other gang members hid in the tree line. There were people who doubted Wyatt Earp’s account at the time and even today, historians question his story.

Curly Bill’s body was not found where Wyatt Earp claimed he was gunned down. Earp suggested the outlaws had returned to the watering hole after the lawmen left to retrieve Curly Bill’s body. He claimed they took Brocius’s body to a location along Babocomori Creek and buried him in an unmarked grave.

The other members of the Clanton Gang who were present that day all discounted Earp’s story.

According to Curly Bill’s buddies, the exchange with Wyatt Earp never happened. They maintain that Curly Bill had grown tired of the outlaw lifestyle. He wanted to opt out of the vendetta against Earp.

They claim that Brocius left Arizona to live in peace and anonymity. Some explained that Curly Bill moved to Mexico where he married a Mexican senorita. Other gang members suggested that Brocius moved to Texas, Colorado, or Missouri – depending on the version you hear – to live out his days under an assumed name.

Even the two rival newspapers in Tombstone took up the debate.

The Tombstone Epitaph presented Earp’s version of Curly Bill’s death as absolute fact. The Nugget, however, reported that Brocius was actually miles away from the watering home on the date Earp said he shot him.

The editors of the Nugget even offered a $1,000 reward for anyone who could deliver Brocius’s body to their newspaper office. Not to be outdone, the Epitaph offered $2,000 if someone could bring in Curly Bill alive. No one claimed either reward.

So, did Curly Bill Brocius meet his end at the hands of Wyatt Earp? We will likely never know the answer to that question. But the mystery of his death simply adds to the legend and allure of American West outlaw Curly Bill Brocius.