Dallas Stoudenmire and the Four Dead in Five Seconds Gunfight 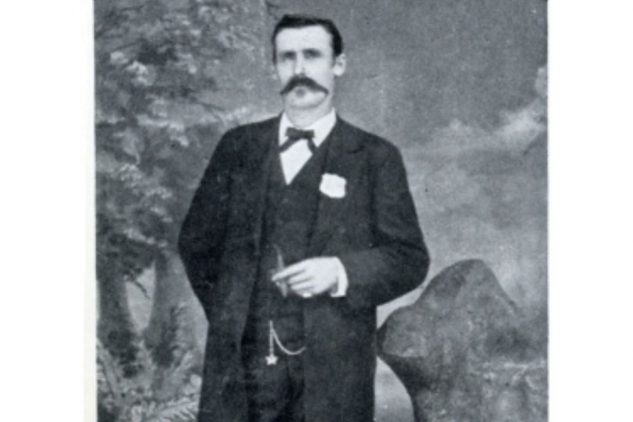 The Old West earned a reputation for being a dangerous and deadly place. Perhaps, it was stories of real-life events like the “Four Dead in Five Seconds Gunfight” in El Paso on April 14,1881, that contributed to the notoriety.

The deadly, yet incredibly brief gunfight began with some stolen cattle, the murders of two farmhands, a racial insult, and some vigilante justice. At the center of the speedy shootout was a man named Dallas Stoudenmire, the newest of a long line of marshals of El Paso, and a man who was in his third day on the job.

Here’s what might not know about Dallas Stoudenmire and the “Four Dead in Five Seconds Gunfight” in an article that will take you longer to read than the actual gunfight itself.

El Paso has a long and rich history.

Located on the Rio Grande river that marks the boundary between Mexico and Texas, El Paso was part of the Republic of Mexico until the late 1840s.

With the signing of the Treaty of Guadalupe Hidalgo which established the Rio Grande as the international border, El Paso officially became a U.S. city. In the mid- to late 1800s, it was a wild and lawless frontier town.

When the railroads were built through El Paso, they brought more white settlers who mixed with the traditional Hispanic residents. Its position on the edge of the frontier meant that plenty of unsavory characters passed through the town. Gambling and prostitution were big business in El Paso.

The city earned a reputation for violence and crime. In fact, it was called the nation’s “Six-Shooter Capital.”

2. Cattle thieving could get a fella (or two) in trouble.

The Manning Brothers of El Paso were often up to no good.

One brother, George Manning, was a doctor, having earned his medical degree at the University of Alabama. The other three Manning brothers – Jim, Frank, and John – fought for the Confederacy during the Civil War.

The entire Four Dead in Five Seconds Gunfight took place because the brothers crossed the Rio Grande into Mexico, stole thirty head of cattle, and drove them back across the border into Texas. They planned to sell the cattle and pocket the cash.

They kept the cattle at their buddy John Hale’s ranch before driving them to market.

3. When cattle went missing, someone went a-lookin’ for them.

The rightful owner of the cattle reported them as missing.

The Texas Rangers were notified, and a Ranger named Ed Fitch started an investigation. Meanwhile, the owner of the cows sent two of his farmhands, whose names are only recorded as Juarique and Sanchez, to track down the stolen cattle.

The trail led Juarique and Sanchez to the El Paso ranch belonging to John Hale. When Ranger Fitch arrived at Hale’s ranch, he discovered the murdered bodies of the two Mexican ranch hands.

Shortly afterward, someone overheard two of John Hale’s farm hands boasting about killing the two Mexicans. Ranger Fitch was alerted, and the two men were taken into custody. The farm hands’ employer, the owner of the stolen cattle, was furious when he found out that his men had been killed.

He raised a posse of about 75 men that marched into El Paso to demand justice. They descended on Hale’s ranch, but after some discussion, the posse opted for a civilized approach to the crimes and wanted the legal system to serve justice. They decided to take up the matter with the local constable, Gus Krempkau.

Constable Krempkau brought Hale’s farm hands before the judge for an inquest. Since Krempkau spoke Spanish, he interpreted what the judge said to the men from the Mexican posse.

John Hale was a powerful man around El Paso, as were the Manning brothers. At the inquest, they and their allies shouted insults and racial slurs at the Mexican posse. They asserted their belief that they were superior to the Mexicans and implied that it was a good thing that the Mexican ranch hands were killed.

The judge halted the proceedings when tensions got too high. He thought the crowd needed to settle their tempers before he continued.

Constable Krempkau left the court proceeding and went to one of El Paso’s many saloons, Keating’s Saloon.

At the tavern was George Campbell. He was the former city marshal of El Paso and, by all accounts, a racist. He was furious that Constable Krempkau was helping the Mexicans, especially ones who were accusing a couple of white Americans of a terrible crime.

Campbell stood up and shouted at Krempkau, “Any American that is a friend of Mexicans ought to be hanged!”

Just three days before the events of the Four Dead in Five Seconds Gunfight unfolded, El Paso welcomed a brand-new town marshal. He was a newcomer to the area by the name of Dallas Stoudenmire.

A native of Alabama, Dallas Stoudenmire was a tough character. He was underage during the Civil War, but was eager to join the Confederate cause anyway. He lied about his age and enlisted.

He was always tall for his age: he topped 6’4″ as an adult but his age was found out and he was discharged. He tried two more times to join the Confederate Army. Finally, he was allowed to stay on as a private.

Dallas Stoudenmire moved west after the Civil War ended. He joined the Texas Rangers for three years. During this time, he established quite a reputation. Not only was he extraordinarily tall, but he was handsome, gentlemanly, and stylish. He was popular among the ladies.

He had a dangerous side though: a heavy drinker, Stoudenmire was known for his hair-trigger temper, which was even worse when he was intoxicated. According to legend, Dallas Stoudenmire carried two guns, one on each side. No matter which hand he drew his gun with, he could hit his mark.

Stoudenmire was hired as the town marshal in Socorro, New Mexico. Not long after, his brother-in-law, Stanley “Doc” Cummings, talked him into going to El Paso. The rough and lawless frontier town was in desperate need of a new town marshal.

El Paso had gone through five other town marshals in the last eight months. The trouble was that many of the previous town marshals, like George Campbell, were well-connected in El Paso. A well-connected city marshal was tempted to overlook the misdeeds of his friends and use the position to extract revenge on their enemies.

The city officials decided that the next city marshal had to be an outsider. They wanted an experienced lawman with a reputation for being tough and courageous. Doc Cummings believed that Stoudenmire would be perfect for the job.

Stoudenmire arrived in El Paso to start his new position on April 11, 1881.

Back in Keating’s Saloon on April 14, 1881, Constable Krempkau retrieved his firearms that he had left behind the bar when he heard George Campbell’s racial slur. The next series of events happened incredibly fast.

In five seconds, to be exact.

John Hale, on whose ranch the bodies of the murdered Mexican farm hands were found, was also inside Keating’s Saloon. He, too, was angry at Constable Krempkau for assisting the Mexicans. He was also quite drunk.

In a split second, Hale snatched Campbell’s pistol and shot Constable Krempkau, wounding him. Alerted to the trouble by the sound of the gunshot, the new town marshal, Dallas Stoudenmire rushed in and fired at John Hale. 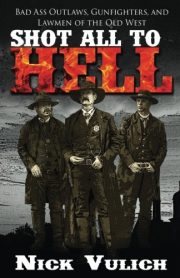 Shot All to Hell: Bad Ass Outlaws, Gunfighters, and Law Men of the Old West

Sadly, his first shot missed his intended mark and, instead, killed an innocent bystander. Stoudenmire’s second shot, however, killed Hale. The mortally wounded Krempkau drew his gun and shot George Campbell. Krempkau then died from his wounds. George Campbell stumbled out into the street, gasped, “You S.O.B.! You have murdered me!” before collapsing dead.

7. The story doesn’t end there.

With the “Four Dead in Five Seconds Gunfight,” Dallas Stoudenmire, the new town marshal of El Paso, made some powerful enemies in town, particularly, the Manning Brothers. The brothers decided that Stoudenmire had to go.

They planned an assassination of Stoudenmire just three days after the gunfight. But the brothers were not the type to do their own dirty work. They hired the former deputy town marshal, Bill Johnson, to do the deed.

Johnson, however, was also the town drunk.

On the evening of April 17, a very drunk Bill Johnson loaded his shotgun and positioned himself behind a brick post, waiting for Dallas Stoudenmire to walk by. When he finally spotted his mark approaching, Johnson – drunk, unstable, and excited – stumbled backwards over his own shotgun.

8. Dallas Stoudenmire was a marked man.

The feud between Dallas Stoudenmire and the Manning Brothers heated up after Bill Johnson’s death. On Valentine’s Day, 1882, Stoudenmire’s brother-in-law and best friend, Doc Cummings, was shot and killed by James Manning.

Manning went to trial for the murder but was found innocent after pleading self-defense. In reality, it was his friendship with the judge, jury, and witnesses that ensured his acquittal. Stoudenmire, still very much an outsider in El Paso, was furious.

To his credit, Dallas Stoudenmire had done what the town hired him to do. Crime and violence in El Paso had dropped considerably and he was feared by most of the residents. He had the respect of the Texas Rangers, as well.

Despite this, he had a reputation for having a hot temper. The town council fired him on May 27, 1882. Enraged, the drunk and fearsome Stoudenmire waved his loaded pistols around at the town council meeting, threatening all the councilmen.

He no longer had a badge to hide behind, but still had the Manning Brothers to contend with.

In an attempt to settle their feud once and for all, the Manning Brothers and Dallas Stoudenmire agreed to meet on September 18, 1882, at a local tavern.

They seemed, at first, to have agreed on a truce. But then James Manning, the doctor, and Stoudenmire started bickering about the rumors and lies circulating through town. The argument escalated. Both men drew their pistols and fired at each other.

Stoudenmire was struck in the arm with one bullet and the second bullet hit him in his shirt pocket. Luckily, this bullet barely scratched him. It was slowed by the folds of paper he had in his pocket.

The force of the bullet hitting his shirt pocket, however, caused Stoudenmire to reel backwards and fall through the saloon doors, into the street. Flat on his back in the dusty street, Stoudenmire tried to fire at Manning, but Manning darted behind him. Manning shot Stoudenmire behind his ear, killing him instantly.

The death of Dallas Stoudenmire didn’t cool Manning’s anger. Using the butt of his gun, the repeatedly beat the deceased Stoudenmire over the head until one of his brothers intervened and pulled him away from Stoudenmire’s corpse.

The feud between Stoudenmire and the Mannings was finally over. Today, Stoudenmire is buried in the Alleyton Cemetery in Alleyton, Texas.

Read more about the infamous lawmen and outlaws of the American West: