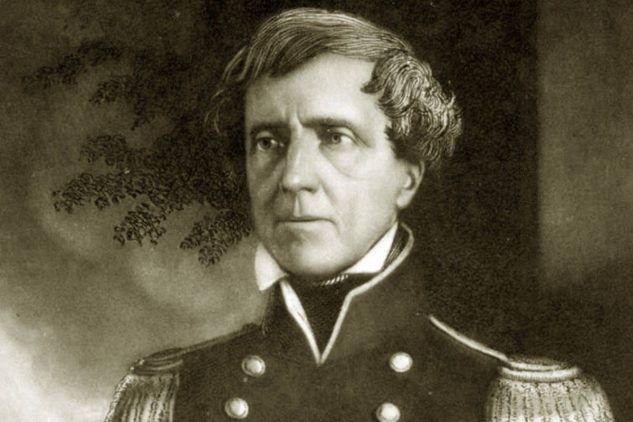 A lifelong military man, General Stephen Kearny fought in the War of 1812 and the Mexican-American War. It was his life off the battlefield, however, that made him a key figure of the Old West.

Kearny documented his travels through the western wilderness in a series of detailed journals, recording his interactions with the Native American tribes, trails through the mountains, and the flora and fauna he saw.

Kearny built a rapport with the Native Americans and advocated for non-violent negotiations when conflicts arose. He also drew up the Kearny Code, an early set of laws by which the territory of New Mexico was governed. He even married the stepdaughter of William Clark of Lewis and Clark fame.

When he arrived on August 30, 1794, Stephen Watts Kearny was the last of fifteen children born to Philip and Susanna Watts Kearny. The family was prosperous, as Philip Kearny — who dropped the O’ from his real surname to hide his Irish roots — was a successful wine merchant and landowner in New Jersey.

His maternal grandfather had also become quite wealthy as a merchant. Stephen Kearny enjoyed a privileged childhood. He was well-educated and even attended Columbia University in New York City before becoming an ensign with the New York militia in 1812.

Stephen Kearny‘s long and illustrious military career began with the War of 1812. He was quickly promoted to First Lieutenant with the 13th Infantry. He was involved in the Battle of Queenston Heights, the first major skirmish of the War of 1812. The battle took place on October 13, 1812, near Queenston, in what is now Ontario.

The U.S. military was trying to seize land on Canada’s side of the Niagara River. They were, however, quite unorganized. The Americans were defeated, and Kearny was wounded and captured. Kearny spent several months as a prisoner of war until the U.S. officials arranged for his release.

In April of 1813, he was promoted to the rank of captain. 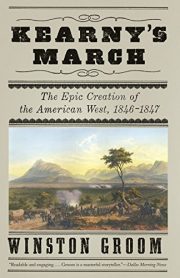 “This book focuses on General Stephen Kearny’s march from Ft Leavenworth to Santa Fe and then California in pursuit of President’ Knox’s prosecution of the war that would double our country and largely fulfill the vision of Manifest Destiny. The march was an incredible feat — a long column marching half a continent over enemy territory that had little water, forage or cover. And Kearny was an incredible leader.”
– Wayne A. Smith, Amazon review

Following the War of 1812, Stephen Kearny remained with the military and moved up the ranks. He accepted an assignment that took him to the Western frontier, serving under General Henry Atkinson.

Kearny served as a member of the Atkinson-Long Expedition, also known as the Yellowstone Expedition. Together with Stephen Harriman Long and with authorization from the U.S. Secretary of War, John C. Calhoun, Atkinson launched the two-year mission to establish a military outpost in North Dakota, at the mouth of the Yellowstone River.

Members of the expedition explored the length of the river into the modern-day states of Wyoming and Montana. The Atkinson-Long Expedition failed to erect a fort in North Dakota as planned, but did establish a military outpost in what is now Nebraska.

This was Fort Atkinson, the first U.S. army outpost west of the Missouri River.

Throughout his journey, Stephen Kearny kept careful and thorough journals. In them, he made notes about landmarks and geographical features, described plants and animals he saw, and detailed the interactions he had with Native Americans. His notes proved to be quite valuable to him during future travels into the Western wilderness.

Kearny took a position as the first commander of the Jefferson Barracks, located south of St. Louis in Missouri. There he made the acquaintance of William Clark, who invited him to visit his home in St. Louis. It was there that Kearny met his future bride.

Stephen Kearny married Mary Radford in the late 1820s. Radford was the stepdaughter of William Clark, one half of the team that led the Lewis and Clark Expedition of the early 1800s.

Also called the Corps of Discovery Expedition, Lewis and Clark set out from Missouri to chart and explore the land acquired in the Louisiana Purchase, across the Rocky Mountains and on to the Pacific Ocean. The marriage of Stephen Kearny to Mary Radford produced eleven children but, sadly, only five of them lived beyond childhood.

Because of his tremendous leadership qualities, Stephen Kearny was appointed as the second-in-command of the 1st Dragoon Regiment in 1833. This newly formed group was the forerunner of the U.S. Cavalry.

Kearny moved his family to Fort Leavenworth in Kansas, where this regiment was based. In just a few years, he took sole command of the regiment and was promoted to the rank of colonel.

Peacekeeper of the Great Plains

Kearny’s time at Fort Leavenworth laid the groundwork for his role as a peacekeeper of the Great Plains. Beginning in the early 1840s, there was an influx of settlers following the Oregon Trail to the West.

Traversing the Great Plains in those days was a dangerous undertaking. Many of the Native American tribes living on the plains were resentful of the intruders. Likewise, many of the pioneers were trigger-happy when they saw a Native American.

Tensions between the two groups were high. Often, Kearny ordered a small group of his men to accompany a wagon train to ensure their safe passage across the Great Plains. A few decades later, the U.S. government mandated that troops escort all settlers through Indian country.

Kearny’s personal policy was to negotiate with the Native Americans. For him, violence was to be a last resort. He relied on his rapport with the indigenous groups and his communication skills to resolve conflicts.

One way Kearny sought to protect American settlers was to establish an outpost along the banks of Table Creek, not far from where the modern-day Nebraska City is located. The new fort was called Fort Kearny in his honor.

Not long after it was built, however, the Army realized that its location was not ideal. Fort Kearny was relocated to a site on the Platte River in the central part of the state of Nebraska.

Another tactic Kearny used was to send his men on a reconnaissance mission across the Great Plains to the Rocky Mountains’ South Pass, which was considered to be the “gateway to Oregon.”

The goal of the reconnaissance mission was to collect information about the terrain, geography, obstacles, and native people that would be useful in aiding settlers along their journey.

In May of 1845, Kearny led his men — 250 strong, plus 15 Army officers — out of Fort Leavenworth to start their four-month reconnaissance mission. With them, they brought 50 sheep, 25 cattle, and 17 wagons ladened with supplies.

They marched roughly 20 miles every day.

Kearny’s men marched to Fort Laramie, to the South Pass, across the continental divide, to Bent’s Fort, the fledgling town of Denver, and onto the Santa Fe Trail, taking them back to Fort Leavenworth.

In 99 days, the cavalry covered more than 2,000 miles and demonstrated the mobility potential of cavalry units.

In 1846, with the outbreak of the Mexican-American War, Stephen Kearny was given the rank of brigadier general and sent to Santa Fe, New Mexico. There, he commanded a force of more than 2,500 men.

Called the “Army of the West,” it consisted of cavalry units, an infantry unit, an artillery unit, and members of the Mormon Battalion, fresh from the Mormon migration west. Against such a formidable force, the Mexican army opted not to fight and retreated back to Mexico.

New Mexico at the time was a lawless land.

With the Mexicans ousted, Stephen Kearny saw the necessity of some sort of government to add stability to the region. Kearny set up a temporary government that combines military and civil aspects.

He penned a set of laws, based on the Missouri Bill of Rights, that became known as the Kearny Code. A printed copy of the Kearny Code was submitted to Congress with the region’s application for territory status. When it was approved, the Kearny Code formed the foundation of the territorial, and then the state, legislature.

In early 1847, Bent traveled from Santa Fe to his home in Taos without any military protection. He was jumped, scalped alive, then murdered by Native Americans who were operating on orders from a group of Mexican conspirators.

In September of 1846, Stephen Kearny and a small platoon of about 300 men traveled to California. On the way, they got wind of a revolt in Los Angeles involving the native Mexican-Californians.

Kearny’s forces entered the fray but were defeated. Both the soldiers and their horses were exhausted from the trek to California. They also endured heavy rainstorms that dampened their gunpowder.

Their weapons would not fire, and Kearny lost more that a dozen men in the fight. Help arrived from John C. Fremont’s California Battalion and Robert F. Stockton’s sailors and marines, who combined were able to regain control of Los Angeles.

With an end to the uprising in Los Angeles, Stephen Kearny, as the highest-ranking Army officer, declared himself governor of California. Robert Stockton, whose sailors turned the tide of the battle in the American’s favor, and John C. Fremont, were naturally upset.

Kearny, in fact, did not outrank Stockton, but since he was a member of the Army, not the Navy, he believed that he did. Until this point, the War Department had not established their hierarchy of command.

When Stockton and Fremont rebelled against Kearny’s authority, Kearny had Fremont court-martialed for insubordination, a conviction that was quickly overturned by President James K. Polk.

In the interim, Stephen Kearny was given yet another promotion, this time to Brevet-Major General. His new post was in Mexico, as the acting civil governor of Veracruz.

During his time in Mexico, Stephen Kearny contracted yellow fever. Terribly ill, he relinquished his command and returned home to St. Louis, Missouri.

Read more about military events and leaders of the American West: