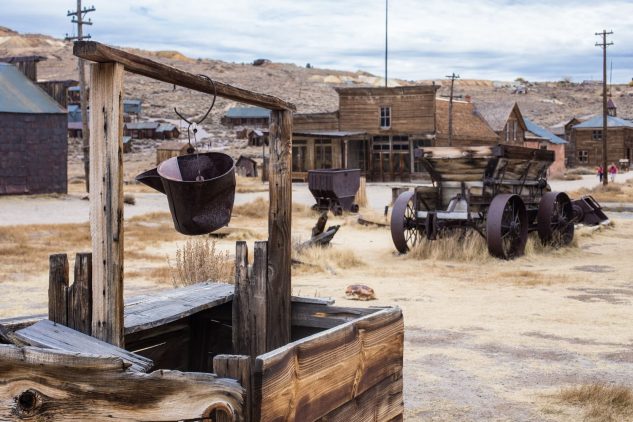 These seven ghost towns in California show glimpses of just how the ’49ers lived in their pursuit of riches and new opportunities.

After the discovery of gold in California in 1848, thousands of prospectors stampeded to the West. These men were usually Argonauts, alluding to the ancient Greek myth of the quest for the golden fleece. Their goal was to strike it rich quick, and all were willing to pick up stakes at the hint of gold.

Such was the case of Rich Bar in Plumas County in the foothills of the Sierra Nevada. It was established in 1852 above a mining camp at Feather Creek which attracted prospectors initially because of rumors of a lake of gold.

So isolated was the settlement that some settlers froze to death in their attempts to reach it. But their motivation was clear: Rich Bar saw an output of some $9 million in gold, plus $23 million from the camps in the nearby area. Rich Bar’s population peaked at 1,000 residents.

As with many gold rush towns in California, when the gold ran out, the town declined, until all that was left was the old Kellogg House, a cemetery under which the town fathers were buried and forgotten, and some homesteads. People came to recognize the significance of Rich Bar and there were plans to restore some of the buildings.

However, in August 2021, the massive Dixie wildfire hit, incinerating the ghost town to the ground. “Our heritage has gone up in flames,” said Paul Russell, the assistant director of the Plumas County Museum.

California is host to numerous precious metal mining ghost towns from the Old West, and many times the only question is how long they will last. Many of the best sites have been converted into state parks and can still be visited to get a taste for this intriguing part of life in the Old West.

Here are seven ghost towns in California worth visiting to see traces of the American West and its mining history.

1. Coloma was where the Gold Rush started.

James Marshall was tasked to inspect a sawmill being constructed in the Coloma Valley, part of a settlement plan by John August Sutter who was looking to build a colony called New Helvetia (current day Sacramento).

On January 24, 1848, Marshall spotted something glittering in the millrace, which was the channel through which river water powered the mill. It was gold, and life would never be the same in California.

Very quickly, Coloma became the home to all sorts of Argonauts looking for gold. By the next year, the town had a post office, hotels, mercantiles, saloons, and gambling dens. Coloma had transformed into the first Gold Rush boom town with a population of 5,000 in 1849.

These settlers often sifted for gold within the river, a technique known as placer mining.  However, the gold in that area quickly dried up and so did the population, dropping to just a few hundred residents by 1851.

Most of Coloma is encompassed in the Marshall Gold Discovery State Park. Visitors can pan for gold in the American River, see a reconstruction of Sutter’s mill (not at the original site), and visit restored buildings that educate visitors on miner techniques.

There are scattered historic buildings in the area which have mainly been restored to educate visitors on the era, including a school, blacksmith shop, and Chinese mercantile store. 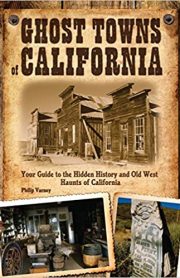 “Love this book! The first two day[s] we visited 3 different spots and loved it. We highly recommend it to any and all looking for new adventures!”
– Mark Wheeler, Amazon review

2. Calico’s boom was built on silver.

Gold wasn’t the only precious commodity in California.

In the south of the state just a few hours drive from Los Angeles is Calico, in San Bernardino county. On April 6, 1881, silver was discovered by six men near Calico, resulting in the development of the state’s largest silver mining camp.

Within two years, three hundred claims were made in the surrounding territory. The value of the land grew more with the discovery of large deposits of borax during the winter of 1882-1883. Within 12 years, miners extracted over $20 million in silver from Calico’s 500 mines.

Between silver and borax production, the town reached a population of 1,200 in 1887.  However, declining values of silver and borax in the 1890s led to the abandonment of the mines and the collapse of the town.

In 1924, the population bottomed out at two residents: John and Lucy Lane. The couple, who had lived in Calico since the 1880s, and had returned, acting as the welcoming committee for Hollywood crews who filmed Westerns on the site.

Three decades later, in the 1950s, Walter Knott bought Calico. He reconstructed the town, restoring all but five of the original buildings to their 1880s state. In 1966 the property was transferred to the county as a park, which also features a museum.

The site attracts people from around the world who want to visit the official Silver Rush town of California.

3. Bodie is in arrested decay.

In the Eastern Sierra at a treeless 8,000 feet, Bodie stands apart from other California ghost towns. Unlike others which have been restored, Bodie’s many dilapidated structures are preserved as is.

This means, for example, that if a shingle falls off, they are replaced with an exact replica.  Even the buildings have a dilapidated slant, being supported by braces within the inside.

Bodie is also unique because of the number of buildings that remain. Nearly 170 worn-out wooden buildings still stand for visitors to take in. This was apparently only one fifth of the original size of the town.

As for the town, it was a gold rush settlement that grew into prominence in the 1870s, when a collapse of a local mine exposed large amounts of the precious metal. Millions of dollars worth were extracted in weeks.

In 1880, the population topped out at about 9,000 souls who could visit 65 saloons and gambling dens, seven breweries, and a red-light district. Bodie stands as one of the best examples of an Old West ghost town and is easily accessible today as a state park.

4. There was a murder a week in Cerro Gordo.

On a remote 400-acre plot in the Inyo Mountains, Cerro Gordo (Fat Hill) had a history of lawless murder that few Old West towns can rival.

It started as a town rich with deposits of lead and silver, which it capitalized on between 1865 and 1938. At its peak, the town grew to almost 5,000 residents, but being so remote, there was hardly any law enforcement. There was reputedly about one murder each week in Cerro Gordo.

After the town became abandoned, numerous rumors emerged that it was haunted.

In 2018, Los Angeles entrepreneur Brent Underwood, attracted to its lurid past, bought Cerro Gordo with the idea of restoring and making it into a tourist attraction. This would surely be popular as a remote destination if the restoration efforts go smoothly.

Yet Cerro Gordo’s violent history has not gone entirely dormant. In 2020, a fire destroyed the American hotel, showing the difficulty involved with the preservation of such historic structures.

5. Shasta died because of the railroad.

While Shasta is not as well-known as some of the other major sites of the early Gold Rush, it is nevertheless an important example of a California ghost town.

Gold was first discovered in Shasta County in March 1848 through placer mining, which led to $800 a day in proceeds. A tent city quickly sprung up, growing to be an important town not just because of gold, but because of its location en route to the Oregon territory.

The mines of the region produced as much as $100,000 in ore per week, which was usually shipped through the town. The settlement, however, suffered an early setback with a massive fire in 1853. In response, the town rebuilt using brick, giving an air of permanence to the site.

Shasta proved to be ethereal, however: in 1886, the Central Pacific Railroad decided that when building its line to connect San Francisco and Portland, it would bypass Shasta in favor of the nearby town of Redding.

6. Malakoff Diggins was an environmental wreck.

One of the most impressive ghost towns in California, and certainly the one with the most interesting name, is Malakoff Diggins. The origin of the name seems to have come from French settlers recounting a victory of the French over the Russians at the Battle of Malakoff during the Crimean War.

This site, and the adjacent North Bloomfield, grew into prominence in 1853 when a prospector named Edward Matteson used a rawhide hose to wash gold out of ore. Very quickly this form of hydraulic mining was adopted and the area grew into a town of 2,000.

Gold was even smelted on site, with one bar weighing in at a hefty 510 pounds. These methods of mining denuded vegetation and wreaked havoc on the ecology and environment. Lawsuits from nearby towns followed.

In 1884, a federal court ordered a halt to these egregious practices, thus ending the town’s run. It was, in fact, the first environmental lawsuit in the country’s history. Today Malakoff Diggins is part of a state park which features restored buildings as well as an impressive landscape that was created by the notorious hydraulic mining practices.

7. The Empire Mine shows you how they did it.

While not a ghost town, strictly speaking, the Empire Mine of Northern California is a great place to visit to get a taste of how mining was done in the years of the Gold Rush.

The mine, which has been converted to a state park, features a mile-deep mine shaft, machine shop, and historic offices. The mine itself operated from 1850 to 1956 and produced about $2 billion in gold at current prices.

However, this was no easy feat since the mine itself was prone to flooding. The mine owner, William Bowers Bourn, hired miners from Cornwall who were familiar with the latest pumping technology to keep the minds dry and lucrative.

In fact, there are a total of 367 miles worth of abandoned and flooded mine shafts at the site. The proceeds of the specie drawn from the Empire Mine made the Bourn family one of the wealthiest families in America in their day.

Read more about the frontier places of the West: