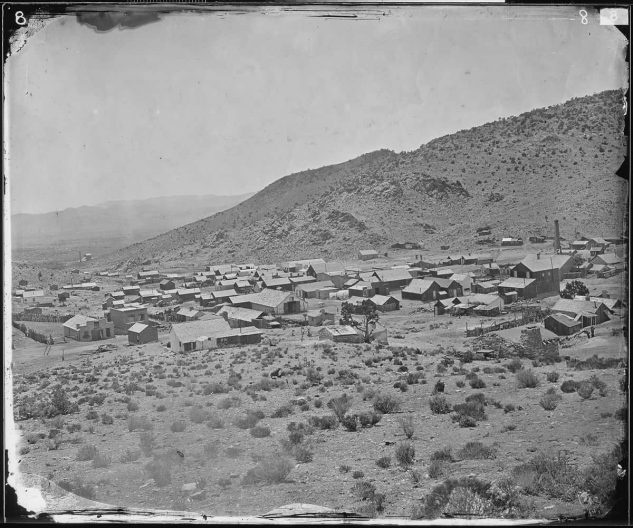 Nevada is littered with more than 600 ghost towns, a testament to the boom-and-bust cycle of the state’s whipsaw past.

Nevada as a territory first came to national attention in 1858 with the discovery of the Comstock Lode, the first large-scale deposit of silver found in the United States. By the next year, a silver rush had begun.

In 1861, Nevada was carved off the Utah Territory and received full statehood in 1864 despite not having the minimum population requirement. This was due to President Lincoln’s desire to push through the Thirteenth Amendment, which banned slavery.

The fortunes of Nevada glittered as much as the silver that its miners drew from the ground.  Hence the nickname of Nevada became the “Silver State.” Much like the California gold rush, Nevada’s silver rush spawned numerous boomtowns towns that flourished as the mines flourished.

But when the ore ran out, the towns died and became ghosts.

Here are seven of the most interesting ghost towns in Nevada based on their history and the state of preservation of their ruins. Most are easily accessible to visitors today.

In 1865, a Native American discovered silver in the heart of Nevada, in the Toquima range.  The find attracted thousands to the region. Towns appeared seemingly overnight, and one of the most prominent of these was Belmont.

While it is unclear how big Belmont was, estimates show that it hosted a population of around 4,000 between 1866 and 1867, although more dubious estimates boast 10,000 people. Either way, Belmont became the Nye County seat in 1867.

At its peak, there were about ten mines in operation near Belmont and six mills were erected to process silver. By the 1870s, Belmont had a red light district, racetrack, churches, schools, and even a Chinatown due to its diverse population. 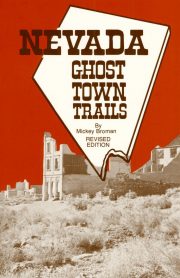 However, almost as quickly as it rose, Belmont fell from grace as another boom at Gold Mountain in 1880 drew off people and resources. This was followed by the sale of the property of the Belmont Mining Company in 1887.

In 1903, there were only 36 residents on Belmont’s voter rolls. Truly one of Nevada’s most fabulous ghost towns, the somber history of its rise in fall is seen through the ruins of a two-story brick courthouse, which had been designed with an optimistic future in mind.

Belmont is registered with Nevada’s state historic preservation office. Preservation efforts are ongoing, including efforts to attract people to the site.

2. Tybo was the site of the so-called “Chinese War.”

On the eastern slopes of the Hot Creek Range, also in Nye County, was Tybo.

The town was officially started in 1874, and by 1877 the town reached its peak with 250 tons of silver leaving monthly. Much like other Nevada silver ghost towns, once mining operations mainly died in 1879, so too did the town.

But Tybo has a dark history that differentiates it from the other ghost towns of Nevada. In 1876, the town was host to an ugly anti-Chinese riot referred to at the time the “Chinese War.”

Due to labor shortages, Chinese woodcutters were hired at the same wages as whites. This sparked racist outrage among whites, who, led by the Workingmen’s Protective Union, stormed the Chinese camp with guns and bullwhips, sending the workers fleeing.

While the company did recall the men, another standoff took place.  Violence seemed imminent but the disgusted Chinese workers offered to leave if their stage fare to Eureka was paid for. The Anti-Asiatic League of Tybo paid the bill.

Today, Tybo has a handful of residents and the area sports the foundations of many buildings. Its charcoal kilns are on the register of historic places.

3. Hamilton was destroyed by self-inflicted wounds.

One of the more self-destructive of Nevada’s silver mining ghost towns is located in the White Pine Mountains. Hamilton was created in 1868 and within a year, boasted 60 mercantiles, a hundred saloons, and two breweries.

For the more domesticated residents, there were churches, schools, theaters, and even a roller-skating rink. In 1869 the population peaked at about 12,000, with scattered miners throughout the region adding another 13,000 to its population. It was selected as the seat for the newly created White Pine County.

Silver poured in, fueling the boom but also bringing rampant crime. Stagecoach holdups averaged about two a week, and with so much specie flowing, corruption was absolutely rampant, according to Wild West‘s Les Kruger.

Then, the mine which fed this boom ran out, being much more shallow than expected. By 1870, there were less than 4,000 people in Hamilton, and dipped to 1,000 three years later.  That year, with the town in such decline, a tobacconist decided to set his building on fire for the insurance money.

To ensure it would go burn up, he closed the town’s water main. The ensuing inferno obliterated the town, causing $600,000 in damages. A further fire in 1885 destroyed the courthouse and its records.

That was essentially the end of Hamilton, and all that remains are scattered ruins and the walls of the Withington Hotel.

One ghost town in Nevada began its life in 1859 as a Pony Express Station.

The station, along the Schell Creek,  got off to a rocky start when Paiute raided it in1860, killing the stationmaster and two workers.  As a result, the army established a post, although this was abandoned in 1862 when the Paiute threat subsided.

During that interim, when the Pony Express ended in 1861, the Overland Express took over, making it an important stage station.  The Overland left Schellbourne in 1869 but in 1871 a prospector struck silver.

Schellbourne grew into a town of 400 that featured saloons, mercantiles, and a Wells Fargo Office. However, the next year, richer deposits in the area started a mass exodus. The town lingered on into the 1920s when its population dipped below 20.

By the late twentieth century, the Pony Express station had deteriorated to the point where it had to be razed, but ruins still exist, with some being on private property.

5. Tuscarora was riven with violent miners.

The discovery of silver in the Goose Creek Range led to the establishment of a new town in 1867. Named Tuscarora, after USS Tuscarora, this Nevada ghost town was distinctive from others.

After the railroad came into the area, about 2,000 Chinese took up mining and resided in Tuscarora. At one point, Tuscarora boasted a Chinatown second in size only to San Francisco.

Aside from mining, the Chinese immigrants sold silk, tea, and harvested sagebrush to feed the furnaces to feed the mills. As with all Old West towns, there was a dark side, too. There were opium dens, gambling houses, and brothels.

The town had a veneer of civility — with skating rinks, schools, and theaters  — coupled with underlying violence. Miners often ended up in knife fights disputing claims, particularly the Cornish miners who were called Cousin Jacks.

Tuscarora’s fortunes soured in 1877 when prices of silver went bust and the mines were too flooded with water to make them worthwhile. By the early 20th century the town was all but abandoned, although it would always patter on in some form.

In 1966, the Tuscarora Pottery School and Retreat was established here, billing the remote location as ideal for creative work. It is still in operation today, and if you like to spin clay and look at some well-preserved derelict buildings, Tuscarora may be your place to go.

6. Rhyolite was a twentieth century boom or bust town.

Rhyolite went through the full lifespan of a boom and bust town in just over a decade.  Created after Shorty Harris and E.L. Cross discovered quartz laden with gold in 1904, the desert town — which got its name from the silica-filled volcanic rock — sprung into existence almost overnight in Nye County.

One three-story building was erected and a stock exchange built. Rhyolite also featured hotels, stores, schools, and the inevitable red light district. The town even had electricity.

The citizens of the town were also the social and creative sort, performing operas, conducting sports, and holding socials. One minor named Tom Kelly even built a house out of 50,000 bottles.

There was a financial panic in 1907, and in 1911 the mine was shut down. The power was turned off in 1916. Rhyolite now holds some of the most impressive ghost town ruins in the state, including the remnant of the three-story bank.

It can still be visited, just be wary of the heat — it’s located in Death Valley National Park.

Metropolis is an unusual ghost town for Nevada, since it was never related to the mining industry. Located in northeastern Nevada in Elko County, the town was founded in 1910 by the Pacific Reclamation Company of New York to build an ideal community based on agriculture.

The company, which had a grandiose vision based on the name of the town, planned a community where approximately 7,500 persons could live in harmony. The company planned a downtown with full amenities.

Even an amusement park was in the company outlook. While the town did well at first, reaching a population of about 2,000, it was struck in the 1930s by a series of events mainly out of the company’s control.

First, jackrabbits devoured the crops. This was followed by outbreaks of typhoid due to poor sanitation. Then came a plague of Mormon crickets. To cap it all, in 1936 a massive fire broke out, gutting the town’s lone hotel.

Still, the town would have hung on had it not been for a lack of water.

This drought-prone region had few sources of available water, and the company attempted to build a dam to divert water from Bishop Creek, a tributary of the Humboldt River. Metropolis found itself in a legal water-rights dispute with Lovelock, a downstream community nearly 200 miles away.

Metropolis lost and as a plaque at the site confirms, the “town ultimately died of thirst.” Visitors who go to Metropolis today will find considerable ruins, including the almost ravaged Lincoln school, as well as a graveyard.