10 Famous Guns of the Old West, from Revolvers to Rifles 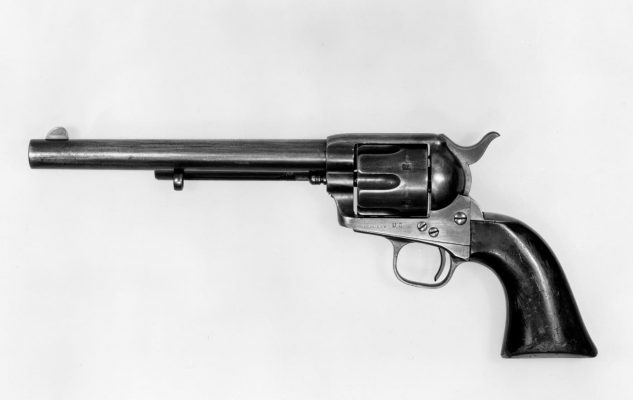 No single gun won the West, but these 10 firearms certainly carved a niche in its history.

The Old West wouldn’t be the Old West without guns. From the lonely desperado to the lawman who imposes order with the barrel of a six-shooter, guns are indelibly linked into the popular memory of the Wild West.

Although gun control was surprisingly prevalent and successful in the Wild West, most people indeed owned firearms. Guns were tools used on the frontier to harvest resources, defend oneself against animals, and to conquer Native Americans.

They are also widely known for their use in shootouts, quickdraw duels, and robbery. These violent encounters, and the weapons used in them, have provided much of the mystique and legend of that time.

While no single weapon ever truly “won the West,” these 10 firearms left a lasting impression on the West’s trajectory and history.

1. The Peacemaker is the most well-known revolver from the Old West.

What is single action? In a single action firearm, the user manually pulls back the hammer of the gun and then fires it with the trigger. Made in various calibers, notably the .45, some 192,000 units of the Peacemaker were produced over the course of its history.

While this wasn’t the first revolver by any stretch of the imagination, its manufacture in 1873 marked a watershed moment in firearms development. It was, according to The Peacemaker and Its Rivals, the first cartridge type revolver adopted by the U.S. Army.

This six-shooter also became the weapon of choice for those living on the frontier. The artillery version of this sidearm was used at the Battle of Little Big Horn. Wyatt Earp, Wes Hardin, Bat Masterson, and the Texas rangers all preferred this weapon to others.

So iconic is the Colt Single Action army that one given to President Theodore Roosevelt as a birthday present fetched $1,466,250 at auction to an anonymous buyer. General George S. Patton famously bore an ivory-handled Peacemaker during World War II.

In fact, Colt still produces the firearm due to continued demand from collectors. 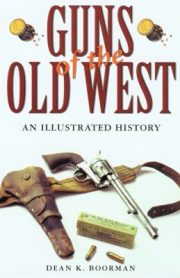 Guns of the Old West: An Illustrated History

“We house a fine collection of guns and rifles in our museum, and this book is yet another selection for our museum store to offer to our guests.”
– Carol Denning, Amazon review

2. The Colt Paterson Revolver was the first of its kind.

Let’s step back in time in Colt’s history and look at the revolutionary Colt Paterson Revolver, which was the genesis of all revolvers. Invented by Samuel Colt in 1831, it was patented in 1836 as the first practical revolver in history.

Called the Paterson because it was manufactured in Paterson, New Jersey, it was much superior than the single shot side arms that had been in existence prior to it. Its usage as a quickdraw weapon on the frontier is easily appreciated.

This design led to frequent jamming, with many anecdotes of it becoming useless in a fight.  The gun was also not particularly powerful and did not necessarily knock somebody out of a battle with one shot.

Still, the design itself led to future brethren that became common throughout the Old West.

3. The Colt Navy Revolver was the first frontier gunman sidearm.

One prominent successor to the Colt Paterson was the 1851 Colt Navy Revolver. This weapon, as described by Shooting Times, was a single action, .36 caliber, six-shooter that was more lightweight than other sidearms of the period.

It was called the Navy because as noted in Weapons of the Civil War Cavalryman, the cylinder was engraved with a scene from the May 16, 1843 victory of the Texas Navy over Mexico at the Battle of Campeche.

This gun was used extensively in Missouri during civil unrest prior to the Civil War. According to the Smithsonian, the Colt Navy was the most popular percussion gun at that time.

Colt’s factory in Hartford, Connecticut turned out 215,348 Navy models in the course of its history. Wild Bill Hickok carried these guns in the late 1860s, and its design elements were carried through to the Colt Peacemaker.

However, the Colt Navy was the first sidearm which could be properly ascribed to the frontier gunfighter.

4. Smith and Wesson’s “Russian” model did in Billy the Kid.

Going away from Colt, let’s turn to one of the other major firearm manufacturers, Smith and Wesson. This firearms company had, according to historian Jeff Kinard, executed a major contract with the Russian Empire for the purchase of its firearms which were dubbed the Russian.

This revolver went through two iterations before landing at the popular New Model Russian, which was manufactured between 1874 and 1878. Over 60,000 guns were produced, with a large amount going to Russia and the Japanese Navy.

Closer to home, this revolver was wielded by Pat Garret, Billy the Kid’s killer, and was called the Russian because of the large number of units that were sold to Imperial Russia.

Springfield rifles were the most common weapon for both the North and South during the Civil War. These weapons were muzzle-loaded, which limited its efficiency and firing rate.

According to the National Park Service, because of the way the rifle was loaded, soldiers would find that bullets would jam halfway up the barrel, often resulting in blow-ups of the weapon.

After the war, Erskine S. Allin proposed to convert these old muzzle-loaders to breach-loaded weapons that could fire .58 caliber bullets. After testing, this was reduced to .50 caliber and it ultimately became the most ubiquitous army rifle in the post-Civil War era.

This gave a decisive advantage to the U.S. army over Plains tribes such as Sioux. It quickly fell into the hands of buffalo hunters and became widely used in the West. These rifles were eventually replaced by more technically superior models, with many of the outdated weapons going to Europe to fight in the Franco-Prussian War.

6. The gun that may have won the West.

Two separate Winchester rifles need to be treated as one entry because of how they are inexorably linked. Oliver Winchester designed the first repeating rifle in 1866, known as Yellow Boy for its yellow gunmetal casing.

This weapon was truly innovative; it allowed multiple shots to be fired from the same gun using a lever to load another round into the chamber. The 1873 Winchester was even more popular, and the company marketed the firearm as the hyperbolic “Gun that won the West.”

This carbine was used by Buffalo Bill Cody in his frontier days and in his Wild West Show. It was said that many a western baby cut his first teeth on the sling ring of a Winchester Model 73 carbine.

According to one source, over 720,000 of the 1873 model were produced. Next to the Colt single-action army revolver, the Winchester is one of the most iconic guns of the Old West.

An enduring image of the Old West is that of a lonely stagecoach trundling over the prairie with a surly looking driver clutching a large double barrel shotgun to guard the coach’s strongbox.

These weapons were called messenger’s guns‘ or cut off guns because they were shorter in length than other shotguns. As described by the Clarke Museum, in the 1850s, Wells Fargo stagecoaches carried mail, passengers, money, and gold from Missouri to California, making them plump targets for desperadoes.

As a result, the company sent armed guards armed with these messenger guns. The messenger gun had the virtue of being loaded with buckshot, so it did not require good aim to use.

This was just as well, considering how bumpy stagecoaches were. It is from this time that the term “riding shotgun” originates, though it seems to have been invented long after the heyday of the Wells Fargo stages.

8. Sharps Old Reliable was the the Old West rifle all others were measured against.

Christian Sharps was not the biggest manufacturer of weapons in the Old West.

That distinction fell to manufacturers such as Colt, Smith & Wesson, Remington, and Winchester. However, Sharps’ company (he had died two years before) designed a rifle in 1874 that became an emblem of the Old West.

Known as Old Reliable, this rifle was available in multiple calibers, with the .50 being extremely popular among buffalo hunters. This weapon was nicknamed the poison slinger or big fifty; admittedly, there is some controversy among gun enthusiasts as to what the exact size of this caliber was.

Buffalo hunter Bill Tilghman supposedly killed over 7,500 buffalo using an Old Reliable. In 1876, Sharp adopted “Old Reliable” as a trademark. Gunsmoke and Saddle Leather notes that the Sharp rifle was the one against which other rifles were measured in the Old West.

9. The Gatling Gun was hardly used, but boy was it effective.

Richard Jordan Gatling first patented this proto-machine gun during the Civil War in 1862. The gun, which features a revolving battery of gun barrels, was hand cranked and could fire off up to 200 rounds per minute.

It was the most feared weapon during this time period. It was used after the war, including in the Indian Wars. Most western outposts were also equipped with Gatling guns. The irony is that these weapons were largely unused since the threat of using this meatgrinder of a weapon usually ceased hostilities.

In one case when placed on the deck of a steamer on a river expedition a witness commented, “This was a beautiful arm and, when placed in position on the boiler deck of the boat, was enough to strike terror to the hearts of any Indians we might run against, as being ‘bad medicine’ for them.”

Gatling guns were also hard to move. George Custer had access to Gatling guns, but declined to bring them to the Little Big Horn since they were so cumbersome. Perhaps if he had brought one, the battle may never had happened.

10. Colt’s double-action revolver was a favorite of Wes Hardin.

We must end this list with the company we started with.

In 1877, Colt produced the first successful double-action revolver that was used in the Old West. What is double action? When a person pulled the trigger it would automatically cock the hammer and fire the weapon.

According to the Frontier American Illustrated News, this firearm was created by William Mason and the first of its kind. This particular revolver came in three calibers: the .32 caliber, Rainmaker; the .38 Lightning, and the .41 Thunderer.

Of these, the Rainmaker is exceedingly rare. According to Colt: An American Classic, only about 200 of these models were completed, and have since become highly desirable among collectors.

The gun, however, reputedly was subject to glitches in its double-action trigger, and often these weapons were used as single-action revolvers instead. Both Wes Hardin and Billy the Kid used these double action firearms.

In an essay published in the July-August 1845 issue of The United States Magazine and Democratic Review, John…