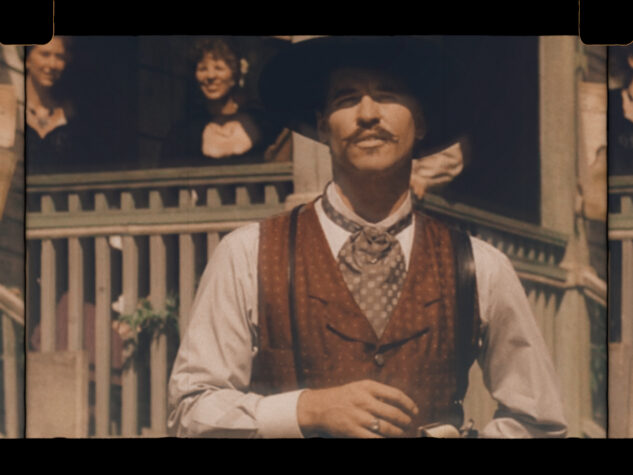 One of the best quotes in Tombstone is also one of the most argued and least understood. But it doesn’t have to be that way. We have answers.

Kevin Jarre’s classic western screenplay Tombstone is full of memorable lines, scenes and face-offs (here are the best Tombstone quotes in case you need a refresher). But one line in particular, uttered in the slow-moving Southern drawl of Doc Holliday, tends to be what many viewers remember – and for good reason.

Nearly 30 years later, the phrase “I’m your huckleberry” is still gnarly as hell. It has swagger, and even more so because most people don’t really know what it means! It could mean anything!

So what does it mean?

The Meaning of “I’m your huckleberry”

Although it’s fun to brainstorm wild theories as to what “I’m your huckleberry” means, the real meaning behind the saying is likely pretty standard. Thanks, Occam’s razor!

Back in the 1800s, the phrase was used to mean “I’m the one you want,” or “I’m your guy” or “I’m your gal” or “I’m the right match” or something along those lines. Basically, it meant: if that’s the situation, count me in!

After it was said, there’d be some skipping and light dancing and maybe a picnic. Who knows. Life was wild back then.

Here’s the evidence: look through newspaper archives of the time and you’ll find all sorts of examples of the phrase “your huckleberry,” and they all have the same context: I’m your guy. Or gal. Or sweet potato. Or acre lot near the railroad station. Or pie. You get the idea.

In 1877, a Missouri newspaper printed the poem “Sweetheart of the Period,” which included the lines:

I whispered, bending down my head,
“Your lips are like a cherry;”
She took my meaning – laughed and
said,
“Well, I’m your huckleberry.”

In July 1881, the Nebraska Herald ran a story about one dude offering another dude a bet based on which mule would be faster in some kind of extraordinarily boring-sounding mule race, and the latter dude took him up on it, saying, “Well, Mr. Mink, I’m your huckleberry.”

When a temperance lecturer in 1879 failed to get any pledges on a trip to Michigan, the “fair belle” of the town offered a kiss to whoever signed up first. “Sis, I’m your huckleberry. Whar’s your pledge?” asked one tall boy. The rest was history, and the pledges flowed like the alcohol they would no longer be drinking. Good times were likely not had by anyone.

Finally, an 1873 purveyor of flour and corn meal in Nebraska ended their newspaper ad with:

If you want No. 1 choice family groceries, that will please everybody, “we are your huckleberry.”

You know when a company today takes a trendy slogan and makes it corporate, and it loses the quirk that made it popular to begin with, and the tides turn against said phrase so quickly that if you continue to use it, you risk appearing out of touch with what’s cool? That’s what appears to have happened here.

This is also why I stay off TikTok.

The point is: in all these examples, and in Doc Holliday’s case, the context is the same: HUCKLEBERRY COUNTRY, LET’S RIDE.

What It Doesn’t Mean

Despite persistent online rumors and myths, the phrase doesn’t have anything to do with huckle bearers, pallbearers or carrying someone’s casket. It sounds cool and is slightly more interesting than the term’s actual meaning, but there isn’t any real evidence to back it up.

And if you use that meaning in the context of the above examples, it makes even less sense. Do you want the best groceries in town? We’ll be your pallbearers!

Val Kilmer even addressed the rumor in his book, I’m Your Huckleberry: A Memoir.

The screenplay’s text says huckleberry, Kilmer named his book after the line, and countless newspaper articles use the phrase in the same context. So we can all be the huckle bearers of this rumor and put it in the ground for good. 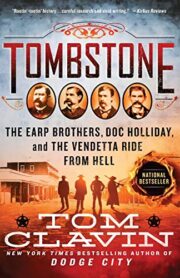 Where “I’m Your Huckleberry” Does Come From

Kevin Jarre based much of the Tombstone screenplay on a book written by Walter Noble Burns in 1927, Tombstone : An Iliad of the Southwest. It’s a rousing drama of the events in Tombstone, but as author Casey Tefertiller points out in the book’s foreword, “it cannot be considered history.”

Burns’ writes the epic more as a novel, complete with intriguing dialogue and dramatic showdowns that may or may not have happened. The book isn’t completely historically accurate, but it is one of the most intriguing Old West reads you’ll find.

What Burns did go hard on is all the research, however, so it was a great source of detail and drama for Jarre while writing his screenplay. Jarre was a stickler for historical details, to be sure, but he didn’t mind using Burns’ material as the foundation of the movie.

In one chapter, Burns describes the ruthlessness of Johnny Ringo, who’s ready to throw down with Wyatt street-fight style.

Wyatt, Virgil, and Morgan Earp and Doc Holliday stood one day in front of Bob Hatch’s saloon and billiard parlour chatting with Mayor Charles N. Thomas. Directly across Allen Street John Ringo, Ike, Finn, and Billy Clanton, and Tom and Frank McLowery lounged in front of the Grand Hotel. The situation appealed to Ringo as ideal for putting into effect his obsession for settling the enmity between Earps and outlaws by personal combat between individual champions.”

Ringo attempts to bait Wyatt into a duel, which is respectfully declined. Wyatt tells him to sleep off his drunken stupor, then hits the saloon for what is probably a strong drink. Ringo then spots Doc Holliday chillin’ in the doorway.

‘They say you’re the gamest man in the Earp crowd, Doc,’ Ringo said. ‘I don’t need but three feet to do my fighting. Here’s my handkerchief. Take hold.’

Holliday took a quick step toward him.

‘I’m your huckleberry, Ringo,’ replied the cheerful doctor. ‘That’s just my game.’ Holliday put out a hand and grasped the handkerchief. Both men reached for their six-shooters.”

Before it gets real wild, Mayor Thomas steps in and snuffs out a duel that everyone would probably like to see, albeit from a safe distance.

Like many scenes in Burns’ book, this one included riveting dialogue that was probably a mix of fact and fiction. There’s never been any historical verification of this exchange, and Burns’ book was researched in the 1920s, some 40-odd years after the gunfight at the O.K. Corral.

But this line in particular stuck out, and when Jarre began writing the Tombstone screenplay, Wyatt Earp expert and consultant Jeff Morey recommended Jarre include the phrase in his script.

“I don’t know if you are going to cover the confrontation between Doc Holliday and Johnny Ringo,” said Morey, according to The Making of Tombstone: Behind the Scenes of the Classic Modern Western, “but if you do, be sure to use the line from Walter Noble Burns’ book Tombstone: ‘I’m [your] huckleberry. That’s just my game.'”

Jarre did include the line, as well as a revised version of the scene, and the rest is cinematic history. To cap it off, Doc’s repeated use of the phrase before killing Mr. Ringo is revengeful storytelling at its best.