10 Fascinating Facts About Jack Swilling, the Founder of Phoenix 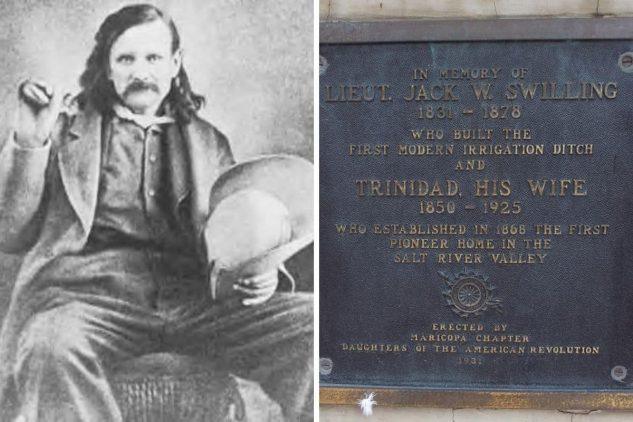 John William “Jack” Swilling was a pioneer, mine owner, rancher, and prospector in the Arizona territory. He is credited as the “father” and founder of the city of Phoenix, Arizona.

Swilling is a colorful figure in American West history and much of what is known about his life previously has been rooted in perpetuated myth. Here are 10 interesting facts about Jack Swilling, the man forever connected to the history of the Arizona Territory.

Swilling was born on April 1, 1830, in South Carolina. Around the age of 17, Swilling made his way to Georgia, where he enlisted in the Mexican-American War. He served in Calhoun’s Mounted Battalion.

Swilling mustered out of service in 1848. After the war, Swilling stayed in the south and married Mary Jane Grey in Alabama around 1851. The couple had one daughter together, Elizabeth.

Exact sources pertaining to Swilling’s life for the next few years are difficult to pin down. One source stated that Swilling’s brother was murdered in California, and he went west to find the men who killed him.

2. Swilling suffered a serious head injury that affected him for the rest of his life.

Around 1854, Jack Swilling was involved in an incident that left him with a serious and painful head injury. Swilling stated in a published letter late in life that he was “struck on the head with a heavy revolver” and the blow to his head cracked his skull. He was also “shot in the left side” and the bullets were never removed from his body.

After the injuries, a doctor prescribed Swilling morphine for the pain. While it aided in subsiding the discomfort, the injuries still affected Swilling for the rest of his life.  It was perhaps this injury and the resulting prescription that caused Swilling’s lifelong addiction to morphine and alcohol. Dr. Eduardo Pagan stated that Swilling was “mean when drunk, which was often. And when he wasn’t drunk, he was on morphine. Sometimes he was on both.”

In the late 1850s, Swilling left his wife and child — for no known reason — and moved west to work as an ox train teamster. According to the Salt River Project History Museum, in that year Swilling may have fought in the Kansas/Missouri state line border warfare. An alternate theory, put forth by Swilling’s descendants, is that Swilling departed Alabama in 1857 after killing a man.

Though he left his wife and daughter behind and traveled west, Swilling stayed in contact with his wife until after 1862. In an 1861 letter to his wife, Swilling stated that he promised to “write to [Mary Jane] every two weeks until [they] met again – which [he] hope[d] w[ould] not be very long.” It seems he had intended to return to his family by the end of 1861 though that never happened.

When Swilling left town, he was a part of the ox train of the El Paso-Fort Yuma Wagon Road. About 1858, once in Arizona, he tried his hand at prospecting. He was a part of an encampment of prospectors in Gila City. 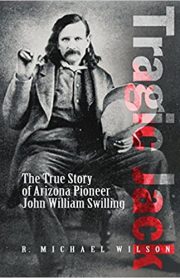 “In this book we not only see Swilling as a significant individual in Arizona history, we also see him as all too human, with the frailties and personal problems that eventually lead to his downfall.”
– Marina Martindale, Amazon review

4. Swilling joined both the Gila Rangers and Arizona Guard.

Around 1860, a group of Apaches apparently raided the camp and a group of men banded together to create the Gila Rangers. Swilling was named captain of the Rangers and under his leadership, the group fought back against local attacks and raids.

Though he had mustered out of the military after the Mexican-American War, once he was in Arizona, he chose to join up with the Arizona Guard. On July 18, 1861, at the age of 31, Swilling enlisted in the Civil War in Pino Alto, Arizona. He fought on the side of the confederacy in Herbert’s Battalion Arizona Cavalry. Through his service he earned the rank of lieutenant.

On February 14, 1862, the president of the confederate states, Jefferson Davis, claimed Arizona as a state in the Confederate States of America and Swilling’s military unit was sent to Tucson to take possession of the town for the confederacy.

According to historians, in June 1862, Swilling refused to take part in requisition of livestock near Pinos Altos. He was ordered to explain his refusal to his superiors, but instead he deserted.

In 1863, Swilling switched allegiances to the Union and was hired as an express rider for the United States army. His duties included carrying the Army’s mail. He was also apparently a spy for the Union army and was paid a stipend of $75.00 a month. After his service in the Union Army, Swilling acted as a guide for the “Walker Party to the gold fields of Prescott.”

6. Swilling was allegedly asked to help capture one of the most infamous Apache chiefs in Arizona.

In 1863, Mangas Coloradas was captured and killed at Fort McLane. The soldiers claimed they killed him because he was trying to escape.

Swilling continued prospecting himself as well and was one of the men who discovered the Rich Hill Mine. In 1864, 34-year-old Swilling married 17-year-old Trinidad Escalante at what is now known as St. Augustine Cathedral in Tucson. After their marriage, Swilling participated in more ranching and mining ventures before settling in the Salt River Valley.

In the town of Wickenburg, Swilling operated a stamp mill. In 1867, after securing investors, Swilling established the Swilling Irrigation and Canal Company. Swilling hired Mexican laborers to construct the irrigation canals.

8. Swilling based his canal system on prehistoric canals built by the Hohokam people.

There was an ancient canal system that was already in existence when Swilling arrived in the area. The canals were originally developed by the Hohokam people. Swilling and his laborers modernized the structure that was already present.

With the success of the canals, water was flowing into the area, and the town of Phoenix was officially recognized on May 4, 1868. On June 15, 1868, a post office was established in the new town of Phoenix and Swilling was named the first postmaster.

9. Swilling and his wife were known as the founders of Phoenix.

According to an article in The Republic, due to their immense influence on the establishment of the town,Trinidad and Jack Swilling are often called the mother and father of Phoenix. The couple also involved themselves in “bridging the gap between Anglos and Mexicanos through religion.” At the time, there wasn’t a church in Phoenix and the first mass was celebrated at the Swilling home.

The Swilling home was an adobe structure called Dos Casas. Together, the couple had seven children. Two of the children passed away in early childhood. The couple also cared for two orphaned Apache children.

Swilling’s businesses continued to accrue. Swilling served as a Justice of the Peace and president of the Democratic Convention in Maricopa County in the early 1870s. Around 1873, the Swillings relocated to Black Canyon where Swilling established another mining company.

Swilling’s earlier injuries caused increasing pain for him over the years, his substance abuse issues were at an all time high, and he began selling off many of his properties and mining interests in the mid-1870s.

10. Swilling was accused of a Yuma stagecoach robbery — and died in prison.

In April 1878, Swilling traveled to “exhume the remains of friend Jacob Snively for Christian burial.” During this trip, he was accused of robbing a stagecoach and imprisoned in Yuma.

From prison, Swilling wrote a heartfelt plea expressing his innocence. In his letter, he discussed his dependency issues, his mistreatment of his wife when he was under the influence, and his attempts at ridding himself of his addictions.

Unfortunately, Swilling never saw his family again and died in prison while awaiting trial in Yuma on August 13, 1878.

At the end of the 1878 publication of Swilling’s letter, a newspaper reporter stated:

Jack Swilling’s hospitality was fully equal to his own representation of it. It was cheerfully dispensed to high and low, rich and poor, and when not crazed by liquor he was a kind and loving husband and parent.”

Eventually, Swilling was found innocent of the robbery.

Jack Swilling was a complex figure in the pioneer west. Many stories have circulated over time about Swilling’s tough nature and his mistreatment of people while under the influence. Some have stated he killed as many as 12 men and scalped at least one person. He had his hands in many different kinds of businesses from stamp mills to mining, irrigation, and gambling houses.

Due to his early injury, Swilling struggled with addiction for the majority of his life. His friends and family both suffered from his wrath and were fully supported by his giving nature. Unfortunately, he was never able to overcome his addictions during his lifetime.

Today, Swilling is remembered as a pioneer and entrepreneur, the father and founder of Phoenix, who helped shape the land that would come to be known as the state of Arizona.

Read more about pioneers, places and stories of Arizona: