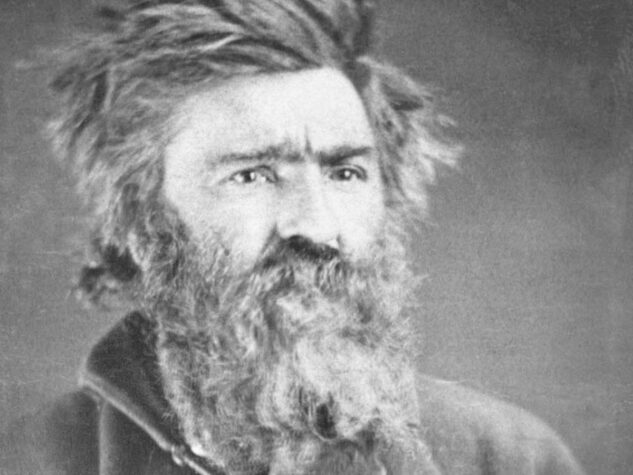 Have you ever watched the 1972 Western movie Jeremiah Johnson, starring Robert Redford as the title character? Good flick.

It was based on two different books about a legendary mountain man whose real-life story was not as sanitized as it was on film. Of course, we know that many Old West figures were the subject of tall tales and exaggerations, but John Jeremiah Garrison Johnston’s gruesome nickname, Liver-Eating Johnson, hints at his eye-popping, creepy claim to fame.

This is a story that’s not for the faint of heart, but take a read through this and you’ll learn 13 truly bizarre things about the revenge-seeking, cannibalistic Old West legend Liver-Eating Johnson.

1. Liver-Eating Johnson was a man of many names.

Record-keeping was hit-or-miss in the 1800s, but as near as Old West historians can figure, Liver-Eating Johnson was born John Jeremiah Garrison on July 1, 1824, in New Jersey.

After becoming a military deserter – stay tuned for more on that – John Jeremiah Garrison changed his name to John Johnston. Somewhere along the line, he lost the “t” in “Johnston” and just used “Johnson.”

Despite what Robert Redford tried to tell us in the ’70s, he didn’t really go by “Jeremiah Johnson,” but that does have a nice ring to it, doesn’t it?

2. Johnson was a military deserter.

Using his birth name of John Jeremiah Garrison, Liver-Eating Johnson joined the United States Navy to fight in the Mexican-American War, which was fought between 1846 and 1848.

Something happened – not sure exactly what – while he was working on a U.S. Navy fighting ship, and Johnson ended up punching a superior officer, something the military frowned upon. Oops.

When the ship made it to port, Johnson decided not to stick around to find out what kind of punishment the Navy had in store for him. He thought he’d be better off heading West to eke out a living in the wild than sitting in a military prison, so off he went.

3. He was an apprentice mountain man.

While it’s hard to wrap our heads around the idea of a reclusive mountain man living alone in a secluded cabin having a large enough following of fans to make him popular, apparently that was a thing. Who knew?

Anyway, Old John Hatcher took Johnson under his wing and took the newbie mountain man to his cabin in northern Colorado, along the Little Snake River. That’s when the lessons began.

Hatcher taught Johnson all the important survival skills every mountain man needed to know, like how to hunt, shoot a Hawken rifle, start a campfire by rubbing two sticks together, and how to avoid bears and rattlesnakes. Johnson learned how to set traps, collect furs, and trade for the provisions he needed.

He was a straight-A student.

Sometime around 1847, Old John Hatcher announced his retirement from the mountain man business. He gave his cabin to Johnson and headed East. Now, Johnson wanted a new roommate. A female one.

The previous year, Johnson was traipsing around the Bitterroot Valley in nearby Montana when he got to know the Flathead tribe living there. One of the tribe’s chiefs – not the main chief, but more like an assistant chief – offered to trade his daughter for some furs. Seems like a fair exchange.

With Hatcher now gone, Johnson returned to Bitterroot Valley to see if that offer was still on the table. Soon, Johnson and his new wife were making the trek back to the Little Snake River. That’s when things took a tragic turn.

Johnson and his bride made it back to the cabin in early fall. For the next several weeks, Johnson packed the cabin with food and provisions for his wife because he planned to leave her alone there for the winter while he went on his fur trapping endeavors.

Guess the honeymoon stage was over.

He taught her how to use his rifle in case she needed to defend herself. In turn, she taught him to speak the Salish language. Apparently, they did a few other things as well, because she became pregnant … but Johnson didn’t know this at the time.

With his wife snug in the cabin, Johnson left with his animal traps with the promise to return in the spring.

Johnson did return to his cabin as promised, but his blushing bride did not greet him. The door of the cabin stood wide open. Lying in the doorway were the skeletal remains of his wife. The body had been exposed to the elements and animals for much of the winter.

Still, Johnson could tell that she had been killed by a band of Crow, another Native American tribe living in the area. He also found a tiny skull beneath the rib cage of his wife. It was then that he realized his wife had been pregnant when she was killed.

6. Johnson began one of the Old West’s most brutal vendettas.

The murder of his wife and unborn child sent Johnson into a rage and changed the trajectory of his life. People living in the region – Native Americans and white mountain men – started finding the bodies of scalped Crow warriors.

Not only were these victims scalped, but their livers had been cut out. As the body count piled up, some of the other mountain men learned of Johnson’s one-man vendetta against the Crow people and put two and two together: Johnson was hunting and killing Crow warriors.

And he was eating their livers. Without onions! They began calling him Liver-Eating Johnson.

Historians believe Liver-Eating Johnson singlehandedly killed more than 300 Native Americans. His murderous, cannibalistic streak continued for years. At one point, the Crow chiefs were fed up.

They selected their twenty strongest, mightiest braves and created an elite task force to track down and kill Liver-Eating Johnson. The band of Crow hit men left on their mission — but none of them ever returned.

The assumption is that they lost a run-in with Liver-Eating Johnson, who must have been really hungry to eat a score of livers. 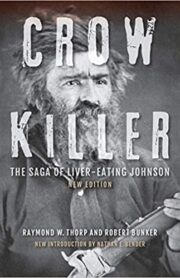 “Although I knew the basics of the story of Jeremiah Johnson I found the detail of his life fascinating, and read it almost without putting it down.”

8. Johnson escaped the Blackfoot by a leg.

According to one story, Liver-Eating Johnson was returning from a trip to the Flathead tribe where he sold whiskey to the Native Americans, when he was ambushed and captured by a band of Blackfoot members.

The Blackfoot knew who he was, so they decided to sell him to the Crow people and reap the profits. But they greatly underestimated him.

The Blackfoot warriors striped Johnson to his waist and tied his hands together with leather straps. They tossed him into a teepee and assigned one warrior – just one, how stupid! – to guard the door. Johnson chewed through the leather straps and tried to sneak out the door.

The poor guard that was ordered to guard Johnson, well, he was in way over his head. As the story goes, Johnson delivered a round-house kick to the guard’s nose. He then seized the warrior’s knife and scalped him with it. He wasn’t finished yet. This is where things get really gross.

Moving with lightning speed, Liver-Eating Johnson used the warrior’s knife – the one he just used to scalp him – to cut the guard’s leg off at the hip. Armed with the leg and the knife, Johnson tried to slip out of camp, but a few of the Blackfoot braves confronted him.

He was able to make his escape by using the warrior’s leg as a blunt instrument and beating the other braves with it. When he was finally in the clear, Johnson was about 200 miles away from his cabin and it was wintertime. Without his gun, he couldn’t hunt for game to sustain him. You guessed it.

He ate the guard’s leg to keep him going until he could make it back to his cabin.

9. Johnson’s streak of revenge lasted 20 years, then he chilled.

Liver-Eating Johnson murderous revenge against the Crow people lasted for more than two decades. Eventually, Johnson made peace with the Crow and even referred to them as his “brothers.”

Johnson, it seemed, was finally over his grief and anger. His vengeance was satisfied. And the Crow people deserve a gold medal for being incredibly forgiving.

No, Liver-Eating Johnson wasn’t on the prowl for a wealthy cougar. He was an actual gold digger. On May 26, 1863, gold was discovered in Montana’s Ruby River Valley in a place called Alder Gulch.

Johnson was in the area, so he thought he’d stop in. So, yes, for a time, he worked as a gold digger. He also spent some time as a woodhawk, an old-timey term for a person who cut and sold cord wood to steamships on the Mississippi River. If those aren’t badass jobs, I don’t know what is.

11. Johnson went from mountain man to soldier and lawman.

In 1864, a few years after the start of the Civil War, Liver-Eating Johnson got involved in the conflict. He traveled to St. Louis and joined Company H, 2nd Colorado Cavalry, to be a sharpshooter for the Union Army.

Everyone must have forgotten that Johnson was wanted for desertion from the U.S. Navy — or the Union Army was desperate for able-bodied men. We aren’t sure which. But when the war ended the following year, Johnson was honorably discharged.

For a time, he was the appointed deputy sheriff of Coulson, Montana, and Leadville, Colorado. He also served as the town marshal of Red Lodge, Montana.

12. He smartly used his veteran’s benefits.

In late 1899, Liver-Eating Johnson checked into the veteran’s hospital in Los Angeles, California. He was taking advantage of his veteran benefits from serving in the Civil War. Once again, his previous desertion from the Navy was swept under the rug.

Upon his death in 1900, the penniless Liver-Eating Johnson was buried in the Los Angeles Veterans’ Cemetery. Prior to his death, however, Johnson told his friends that he longed to be buried in the wilds of his old stomping grounds of Colorado, Montana, and Wyoming. His final wishes were ignored at the time of his death.

Then, in 1974 – not coincidentally, right after Robert Redford’s Jeremiah Johnson debuted – an artist and amateur archeologist from Cody, Wyoming, named Roger Edgar devoted himself to studying Liver-Eating Johnson’s story.

When he learned that the Crow-killing mountain man’s final wishes were ignored, he wanted to right the wrong. He enlisted the help of seventh-grade history class at Lancaster, California’s Park View Junior High School to help him, because who could say no to an adorable group of young, pimply faced scholars?

The students launched a letter-writing campaign — and it worked. Johnson’s remains were dug up and reburied in Cody, Wyoming on the banks of the Shoshone River, a place that Johnson would have loved.