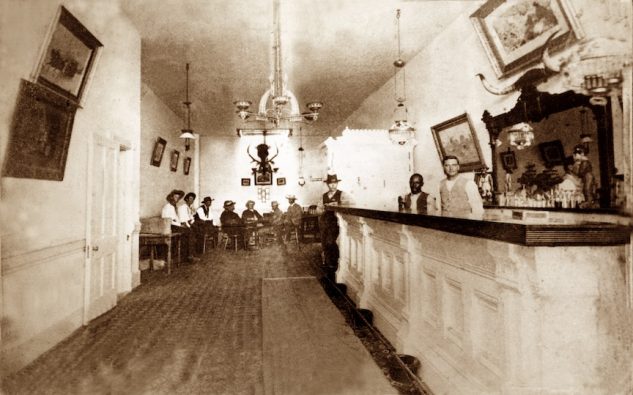 Fans of the television show Gunsmoke may have fond memories of the Long Branch, Dodge City, Kansass lively and popular saloon. Although Hollywood no doubt took many liberties with the Old West tavern, it was, nonetheless, based on an actual establishment.

Built in 1874, the Long Branch Saloon played host to cattle drivers, cowboys, outlaws, saloon girls, gunslingers, and entertainers for just over a decade. Here’s a look at 10 interesting facts you probably didnt know about the real Long Branch Saloon.

1. The Long Branch Saloon came to be because of a bet.

Dodge City, Kansas was a rough frontier town in the mid-1800s.

With so many people coming in and out of town, things could get dicey at times. But there were also moments of playful camaraderie. According to legend, a group of soldiers and a group of cowboys decided to play a friendly game of ball.

A gentlemanly wager was placed on the outcome of the game. When the soldiers lost, they had to pay up on the bet: they bought the lumber and building materials needed to build a saloon in the town.

Construction was completed in 1874. 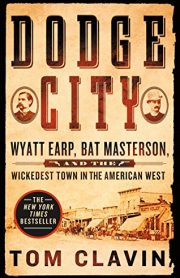 “I knew about The Dodge City War – a bloodless battle over the Long Branch Saloon – but mostly I knew about it from movies. Now I am well and happily schooled on the subject.”
– Tamara Thorne, Amazon review

2. The Long Branch Saloon was named after a town in New Jersey.

A few years later, in 1878, the saloon was purchased by a prominent local rancher and farmer, Chalkley Beeson, and his partner, William Harris.

Harris decided that the saloon needed a clever name. He decided to use the name of his own hometown, Long Branch, New Jersey, as the taverns moniker.

3. The Long Branch Saloon has a gunfight named after it.

News reports of a gunfight in Dodge City called the event the Long Branch Gunfight, which gave the saloon a national notoriety.

The gunfight occurred between Levi Richardson and Frank Loving on April 5, 1879. Richardson was accused of making sexual innuendos toward Lovings wife. Loving confronted Richardson and the two began to argue.

The argument spilled into an exchange of gunfire.

Richardson fired at Loving, but the bullet just grazed his hand. When Loving returned fire, however, he struck Richardson three times, killing him. Loving was arrested and charged with murder. The investigation into the incident showed that Loving acted in self-defense.

He was released from jail and the charges were dropped.

4. The Long Branch Saloon had a house band.

Chalkley Beeson, one of the many owners of the Long Branch Saloon, may have been a successful rancher and entrepreneur, but his true passion was music.

Chalk Beeson kept the crowds entertained performing with his five-piece orchestra. The musicians put on a show every night for the enjoyment of the saloon patrons. Even folks who didnt drink or gamble frequented the Long Branch for the great music, dancing, and the non-alcoholic lemonades and sarsaparillas.

The Long Branch Saloon also had plenty of dancing girls to entertain the crowds every night, although it is not known if any of them were named Miss Kitty. The lonely cowboys, fresh off a long cattle drive, could pay for the company of one of the many prostitutes or soiled doves that worked out of the Long Branch.

Gambling was not legal in those days. Neither was prostitution.

Instead of fighting the charges they were clearly guilty of, the owners of the Long Branch just paid the fines. For many years, the salaries of the Dodge City law enforcement officers were paid from the fines collected at the Long Branch Saloon.

6. Anheuser-Busch Served their beer there.

The original beer that bartenders at the Long Branch Saloon served to patrons was Anheuser-Busch beer. Based in St. Louis, Missouri, and founded by German immigrants, the beer brewer was popular in the region from the mid-1800s onward.

The Long Branchs owners werent necessarily looking for a locally sourced brewer it was more a matter of convenience, as trade routes were already established between St. Louis and Dodge City, some 500 miles away.

7. The Long Branch Saloon was popular among Old West characters.

Dodge City was at a crossroads of the western frontier.

Westward pioneers passed through the city, as did missionaries, gamblers, and drifters. Many of the well-known figures from the Old West visited Dodge City and frequented the Long Branch Saloon.

According to legend, Wyatt Earp, Bat Masterson, Doc Holliday, Clay Allison, Charlie Bassett, and Dave Mather all bellied up to the bar at the Long Branch Saloon at one time or another.

8. Drinks at The Long Branch were cooled with ice year round.

In the summer months, the owners paid to have ice from the mountains of Colorado shipped via train to Dodge City so that the drinks at the Long Branch would remain refreshingly cool.

9. The Long Branch Saloon played a factor in the Dodge City War.

In 1881, one of William Harriss buddies, a gunslinger and gambler named Luke Short, arrived in Dodge City. Harris gave his pal a job at the Long Branch Saloon.

Soon, Short bought out Harriss partner, Chalk Beeson, and became part owner of the Long Branch. A short time later, a new mayor of Dodge City was elected. He was Lawrence E. Deger, a man of strong moral conviction. He campaigned as the mayor who would clean up Dodge City and rid it of the gambling and drinking presence. This spelled trouble for the Long Branch.

The new mayor and the city council immediately passed two specific ordinances that targeted the Long Branch Saloon. The first one, Ordinance No. 70, demanded the Suppression and Vice of Immorality in the city.

The second one, Ordinance No. 71, gave law enforcement the power to define and punish vagrancy. Days later, three of the Long Branch prostitutes were arrested. Luke Short tried to intervene on their behalf and he ended up firing his gun at law enforcement. For this deed, Short was kicked out of Dodge.

Luke Short settled, temporarily, in Kansas City, but he was still determined to beat Mayor Deger and reopen the Long Branch Saloon, as well as all the other taverns in Dodge City. He rallied a few influential friends to help him, including Wyatt Earp and Bat Masterson. He even called on Charlie Bassett, who was the ex-sheriff of Dodge City and a one-time owner of the Long Branch. The group petitioned the Kansas governor, George W. Glick.

Back in Dodge City, it was peak time in the cattle drive industry. The city was overrun with cowboys and ranchers with plenty of money and nowhere to spend it. Without established taverns, saloons, and dancehalls, the men congregated in camps just outside the city where they drank, gambled, caroused, and fought each other.

The lawmen of Dodge City found themselves thrust back into the lawless days of the past.

Governor Glick, along with Dodge City business owners, powerful cattlemen, ranch owners, and officials with the Santa Fe Railroad, pressured Mayor Deger to abolish his ordinances and reopen the drinking and gambling establishments of the city.

At last, the mayor conceded. It was easier, he discovered, to keep an eye on the drinking, gambling, and prostitution when it took place in established saloons that when it was rampant in the streets. The event eventually became known as the Dodge City War.”

The Long Branchs tenure as the best-known saloon of the Old West was a relatively short one. In 1885, fire roared through the downtown blocks, destroying many businesses, including the Long Branch Saloon.

The wooden structures burned quickly and there was no stopping the flames. The Long Branch Saloon was not rebuilt. However, a replica of the saloon was included in a collection of buildings erected in the mid- to late-1900s to serve as a tourist attraction.

Read more about the lawmen and outlaws of the Old West: