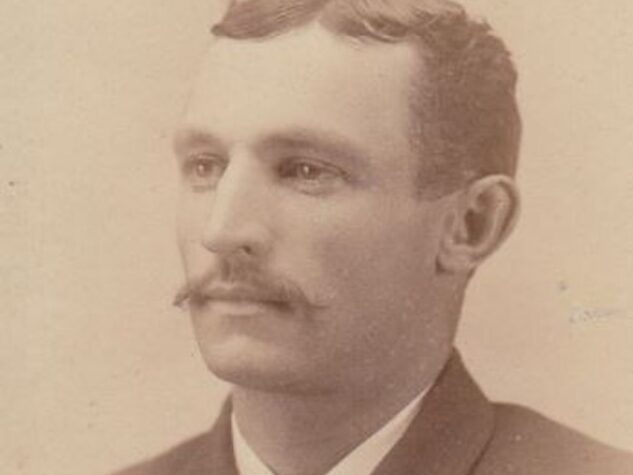 Luke Lamar Short, who could definitely be played by James Franco in a movie about Luke Short. Photo credit: Wikimedia Commons

Gunslinger, gambler, saloon owner, cowboy, and sports promotor (yes, really), Luke Short might not have the same name recognition as his friends like Bat Masterson and Wyatt Earp, but he was a cagey dude who dodged his way out several gunfights, arrests, and one near lynching.

In his spare time, he was even a rare Old West sports fan.

He could best be described as a petite fellow, standing about 5 feet, 6 inches tall. He weighed only about 140 pounds, but he reportedly wore a size 7 1/8 hat so he was shaped a bit like a bobblehead. Luke Short was known for having a quick temper. Like a chihuahua, he apparently suffered from short-man syndrome.

2. He engaged in illegal whiskey trade.

In 1876, Luke Short headed to Nebraska and set up shop near Camp Robinson with a brilliant entrepreneurial plan. Banking on the cliché stereotype that Native Americans loved whiskey, Short brought in a supply of cheap and disgusting whiskey called “Pine Top.”

He diluted it, of course, to squeeze out every drop of profits. He traded one gallon of Pine Top – valued at about 90-cents – for one Indian buffalo robe – worth about $10. Not a bad racket.

His gravy train started to sour when roving bands of sloshed Sioux braves picked fights with folks in the nearby villages and basically acted like drunken fools. When concerned citizens pointed a finger at the tribal chief, he deflected by pointing a finger at Luke Short.

The government sent a few Army guys to arrest Short on charges of illegally trading whiskey, but the real problem was that Short wasn’t paying any taxes on his sales.

The soldiers interrupted Short’s dinner one night and unceremoniously plunked him on a train for Omaha to face charges. But Short never made it there. He ditched his Army escort, hopped off the train, and made his way to Denver.

3. Short was in a shootout in Tombstone … but not THAT shootout.

Luke Short eventually showed up in Tombstone, Arizona, because why not?

There, he met up with an old pal, William H. Harris, who introduced him to Wyatt Earp and Bat Masterson. On February 25, 1881, seven months before the infamous Shootout at the O.K. Corral, Short and Masterson were gambling at the Oriental Saloon – more on this later – when Charlie Storms made some rude remarks to Short, perhaps talking about his mama (who knows?).

Storms judged a book by its cover. He assumed the pint-sized Short was a non-threat he could bully. Big mistake. Masterson managed to break up the fight between Short and Storms, but both men were filled with alcohol, pride, testosterone, and rage.

Outside the saloon, Storms approached Short and Masterson and, in a total dick move, yanked Short off the sidewalk by his ear. With his other hand, Storms went for his pistol.

He was quick, but Short was quicker.

He shot Storms in the chest at point-blank range – then shot him again as he fell dead to the ground, just for good measure. The coroner’s jury examined Storms’ body and interviewed witnesses and determined that because Storms drew his weapon first, Short’s actions were justified. He didn’t face any charges.

4. He was in ANOTHER famous shootout.

Several years later, Luke Short was involved in another high-profile shootout, this one in Fort Worth, Texas. And Bat Masterson was there for this shootout, too.

A guy named Jim Courtright was trying to shake down Luke Short, who was then an owner of the famous White Elephant Saloon – again, sit tight for more on this – for protection money.

Short refused and Courtright stomped out of the saloon in a pout. He returned a short time later, this time with a couple of loaded pistols. Short stepped outside to talk to him, along with Masterson and another friend, Jake Johnson.

Courtright was standing about four feet away from the other three when he suddenly went for his pistol. It was hard to outdraw Luke Short. He fired, striking Courtright in the chest and sending him flying to his backside.

When he hit the ground, he tried to shoot his weapon, but once again, he was too slow. Luke Short pumped five bullets in him before he could get a shot off.

Related read: 8 Reasons Why Black Bart Was a One-Of-A-Kind Outlaw

5. Luke Short was this close to being lynched.

Jim Courtright was a well-known, yet controversial figure in Fort Worth. As a lawman, he was successful in cutting the city’s murder rate in half, but he also supplemented his income by selling “protection” to local business owners.

He was simultaneously admired and feared. After the gunfight with Luke Short, a crowd of Fort Worth residents seized Short and made to lynch him for killing Courtright.

Vigilante justice was definitely a thing in the Old West, so a noose was tossed around Short’s overly large head, but others stepped in and prevented the lynching.

Short dodged a bullet – and a rope.

6. Okay, let’s talk about the saloons.

Luke Short never went to school and could barely write his own name, but he was a pretty savvy businessman. In fact, his business interests included three of the Old West’s most popular saloons.

In early 1883, Luke Short bought a controlling interest in the Long Branch Saloon in Dodge City. A few months later, the city council voted to clean up the town. That was code for shut down all the gambling, drinking, and prostitution establishments, even though they’re all fun.

This set into motion a series of events that became known as the Dodge City War. It was more of a war of wills than an actual war with guns and stuff. It ended without a shot being fired, which really wasn’t Short’s style.

But Short was able to reopen the Long Branch. Meh. By this time, he was ready to get the heck out of Dodge.

During his time in Tombstone, Luke Short bought into a partnership with the Oriental Saloon. It was the same story with the White Elephant in Fort Worth. Short had a saloon in every town.

Related read: 7 Reasons Why Seth Bullock was one of the Last True Westerners

7. Luke Short was always up for some fancy shootin’.

We know that Luke Short was an excellent shot, but there was an incident in Fort Worth that really cemented this. As the story goes, Short was in a restaurant when the waiter served him a glass of milk with a fly in it.

Why he ordered milk in the first place is a mystery, but the fly was certainly an unwanted bonus.

Short didn’t ask to speak to the manager like a Karen. Instead, he simply flung the contents of the glass into the air, swiftly drew his gun, and fired.

You guessed it … his bullet struck the fly. Seems like overkill if you ask me.

We don’t often associate sports buffs with the Old West, but Luke Short was a man of diverse interests.

And, so was his best bud, Bat Masterson. Masterson was a boxing buff and his interest in the sport rubbed off on Short. He threw his hat into the ring: figuratively, not literally.

Well, once it was literal.

On June 28, 1885, Luke Short was unexpectedly tapped to referee in a boxing match in Weatherford, Texas. Short Luke Short, at only 5’6″, was dancing around the ring with a couple of guys who topped 6’2″ or better, nicknamed “Kid Bridges” and “St. Joe Kid.” Tempers ran high but Luke Short survived sharing the ring with these guys and declared St. Joe Kid the winner.

Between 1889 and 1893, Luke Short spent the summers in Chicago to escape the Texas heat and take advantage of the quasi-legal opportunities available in the Windy City.

Here, Short acted as a boxing promoter, setting up various fights. He even set up boxing matches back in Fort Worth too. The local newspaper in Fort Worth called Short “a prominent figure” in the boxing world.

One of Luke Short’s other pals, Jake Johnson, introduced him to another sport: horse racing.

Just like he did with boxing, Short became a rabid horse racing fan and then tried to figure out a way to profit from it. Short and Johnson attended the inaugural running of the Futurity Stakes race that was held at the Sheepshead Bay Racetrack on New York’s Coney Island on Labor Day in 1888.

They were super impressed with the facility and returned to Texas with dollar signs in their eyes. With Short as his silent partner, Johnson opened the Palais Royal, a horse racing resort.

Remember how Short liked to relocate to Chicago for the summer? Well, now he went to Saratoga Springs, New York, every spring to participate in horse racing shenanigans there.

He was quite successful at the racetrack, which financed his semi-nomadic lifestyle. And although he fancied himself a big wig in the boxing and horse racing circles, history would remember Luke Short as an Old West gun fighter through and through.