Manifest Destiny: The Good, the Bad and the Ugly 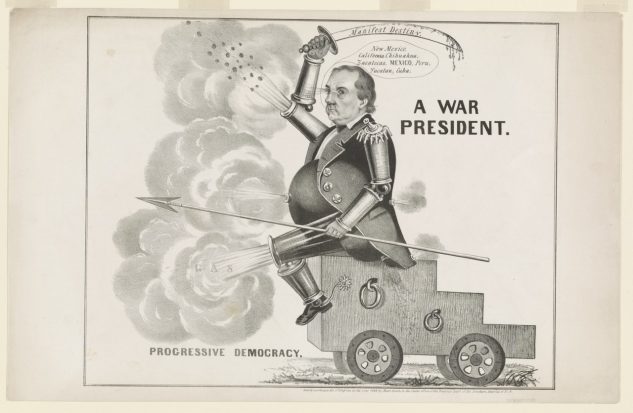 In an essay published in the July-August 1845 issue of The United States Magazine and Democratic Review, John O’Sullivan wrote that it was America’s “manifest destiny” to expand across the entire continent and settle the land.

When he penned the phrase, O’Sullivan may have given it little thought, but many of his readers grasped on to these two words fiercely. In fact, those two words altered the course of the nation’s history for the next several decades.

What is Manifest Destiny?

Manifest Destiny was the belief that the United States was destined — and preordained by God — to control all of the North American continent.

This belief was a strange mix of religious sentiment and colonialism, with a heaping scoop of American exceptionalism thrown in. It spoke of the romantic and passionate idea that God favored Americans and that He had a special plan for them. In fact, it was almost blasphemous to disagree with this concept, for to denounce western expansion was to defy God’s will.

The pioneering spirit of westward settlers was attributed to Manifest Destiny. Indeed, the westward expansion, following on the heels of the Louisiana Purchase, the Treaty of Guadalupe Hidalgo, and other territorial acquisitions, allowed the United States to control the natural resources and Pacific coast ports. 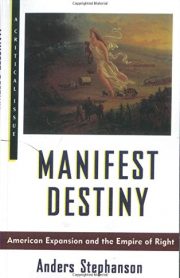 Manifest Destiny: American Expansion and the Empire of Right

“Stephanson writes a scholarly and detailed look at the backstory and subsequent growth of American exceptionalism through the lens of religious and economic fervor, all under the rabid umbrella of Manifest Destiny. A really good read.”
– Amazon review

Without Manifest Destiny, the U.S. may not have become a world superpower.

To sort it all out, we will take a look at Manifest Destiny through three different lenses to see the good, the bad, and the ugly of this period in American history.

The United States was still in its infancy when, in 1803, President Thomas Jefferson’s Louisiana Purchase more than doubled the size of the country. Jefferson hoped to see the U.S. become a great agricultural country.

He envisioned farms spreading far to the west. Still, it took a few more decades — and O’Sullivan’s “Manifest Destiny” rallying cry — before the westward movement was in full swing. Expanding the nation was beneficial to the United States in many ways. Here is some of the “good” to come from Manifest Destiny.

Hundreds of thousands of Americans had an opportunity to own land for the very first time thanks to the westward movement and Manifest Destiny. Many people, including recent immigrants to the U.S., had little opportunity to improve their lot in life while living in the crowded cities of the East.

For many, promise of free land in the vast, untamed western wilderness was too enticing to pass up. The ability to own land helped to elevate many pioneers out of poverty, but more importantly, it gave them control over their own lives and their own futures.

From Sea to Shining Sea

The spread of Americans to the west, as well as the acquisition of land from Mexico at the end of the Mexican-American War, gave the United States access to the Pacific Ocean. With ports on both the Atlantic Ocean and the Pacific Ocean, the United States could ship products and goods to more locations in a shorter amount of time. This helped the U.S. increase its international trade and, in turn, boost its economy.

When the United States claimed the western territories as its own, it acquired lands rich in natural resources.

The vast grasslands of the Great Plains were ideal for ranching and farming. Timber was plentiful in the Midwest and Pacific Northwest. Gold, silver, iron ore, and other valuable metals and minerals were also found.

Additionally, the network of mighty rivers was stocked with salmon and trout. There was plenty of game for hunting in the forests and prairies of the west. The cities of the west were built because of the wealth of natural resources.

Manifest Destiny gave the United States the ability to launch warships and trading vessels from either coast. It also greatly contributed to the U.S.’s foreign policy philosophy beginning in the middle 1800s.

According to Manifest Destiny, God had special plans for the United States. It was God’s will, many people thought, that the American values and ideals spread across North America and even the world.

The places where the United States set up trading outposts, such as the Hawaiian Islands and Alaska, were also prime locations for converting people to the American way of life, thus spreading the ideas of democracy and freedom far beyond the U.S. border.

Manifest Destiny was closely tied to the ideas of American colonialism and American exceptionalism. Since God had allegedly preordained the American people to control North America, it was right and just to establish settlements on the lands of others.

This expanded to cover American colonies outside the North American continent. The prevailing attitudes surrounding American colonialism and American exceptionalism, in hindsight, meant bad news for some groups of people.

The belief in Manifest Destiny was rooted in American Exceptionalism.

The concept held that the United States was somehow special and unique among all the countries on earth. The basic values and principles of American democracy, as well as how the government was structured, made the U.S., according to the belief, superior to every other nation.

With that position of superiority, however, came great responsibility. American Exceptionalism served as the excuse for the U.S. to meddle in the affairs of other countries because the concept stated that America was entitled to become a major force for good on the world stage.

The U.S. often annexed other territories and usurped land in the name of democracy and freedom.

In the early 1800s, the United States preferred to stay out of world affairs and focus on its own issues. But when the concept of Manifest Destiny swept across the nation, Americans began to embrace the idea of American Imperialism.

It was more and more accepted that the United States had both the right and the obligation to extend its own political and cultural influence to areas and groups outside its borders, including Native Americans.

Those people were typically non-whites, including Native Americans, Mexican, Hawaiian, Inuit, and Pacific Islanders. Because the United States was supposedly tasked by God to spread their ideals across the region, Americans used their religion to justify their air of superiority and to rationalize racism.

Americans were so sure that they were fulfilling God’s wishes by seizing lands belonging to indigenous people that the plight of Native Americans was often not a factor in their decision-making.

In the name of Manifest Destiny, the Native American tribes were uprooted from their homelands, and the spread of Americanism throughout the west also meant the spread of slavery.

Americans may have thought it was God’s will that they take over lands in the west, but there was one problem: there were people already living there.

The many Native American tribes that lived in the region for generations didn’t appreciate being told that they were in the way of the westward expansion. Violent skirmishes were common between the indigenous people and American settlers and soldiers, and larger massacres often occurred, with Native Americans incurring the most significant losses.

Because the Americans at the time believed they were superior to others, they also felt it was their duty and responsibility to force the Native Americans to adopt their way of life, religion, and values. The traditions and cultures of indigenous tribes would be forever diminished.

As the United States acquired more western territories, it led to a controversial national debate: should slavery also spread into new places? Should the newly established territories be able to decide for themselves whether or not to permit slavery?

Or, should the federal government decide?

These questions caused such heated debates and division among the general public — and, in particular, among lawmakers — that it was a contributing factor to the outbreak of the Civil War.

Was Manifest Destiny a good thing or a bad thing?

The answer to that depends on which historian you ask. There are a few things that nearly all of them agree on, however: Manifest Destiny served as a guiding principle that ignited the growth and expansion of the United States in the mid-1800s.

Above all, it was a concept rooted in elitism, racism, and misguided ideals of superiority. Thanks to Manifest Destiny, the United States enjoyed tremendous growth and moved into a position as a world superpower, but it did so at the expense of many non-white populations.

Read more about the American frontier and westward movement: