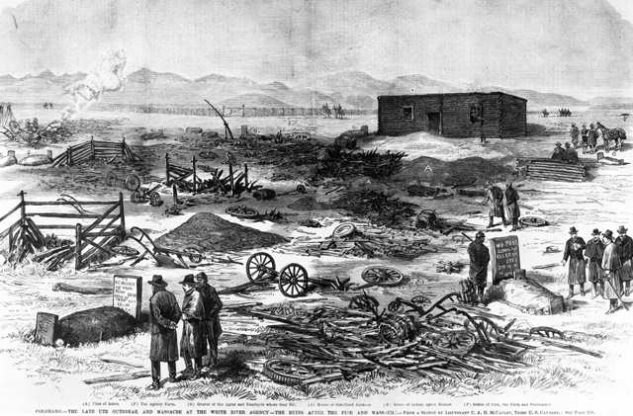 In 1879, a tragic series of events and conflict between white settlers and the Ute people came to an unfortunate end: the Meeker Incident, previously known as the Meeker Massacre. Nathan Meeker, an appointed Indian agent, was killed by Ute people.

The Meeker Incident was a complicated situation and the result of Nathan Meeker having little to no understanding of the Ute people. Meeker attempted to change the Utes’ way of life and threatened them (whether unintentionally or intentionally) by calling in federal troops.

In 1878, Nathan Meeker was named the Indian Agent in charge of the White River Agency in northwest Colorado. Prior to his appointment, Meeker had no experience with Native Americans and had no knowledge of the Ute people and their culture.

Meeker was originally from Ohio and grew up working on his family’s farm. He also had a passion for writing — he wrote two books, and as a teenager worked for multiple newspapers.

During his time at The New York Tribune, he became a close friend of the newspaper’s publisher, Horace Greeley. Greeley and Meeker shared similar beliefs and intended to establish towns founded on cooperative agriculture and temperance with a heavy importance on religion, education, and family values

While working for Greeley as the agricultural editor of The Tribune, Meeker was sent to the Colorado Territory to write pieces for the newspaper. It was this first journey west that sparked Meeker’s interest in moving to the Rocky Mountain region.

During his travels, he met William Jackson Palmer, the founder of Colorado Springs, and William Byers, the founder of The Rocky Mountain News. Byers and Palmer shared their plans for establishing railroads and communities in Colorado and this perhaps inspired Meeker to follow suit.

Meeker had tried to establish idealistic communities in the past but to no avail. In 1869, he advertised in The Tribune for volunteers to travel west with him and establish a new town in Colorado.

With the help of Horace Greeley, Meeker chartered the Union Colony, an agricultural settlement. He bought land in Colorado through his association with William Byers, and in 1870, set out to Colorado to officially inhabit his new town.

Meeker named the new settlement “Greeley” after his employer, Horace Greeley. Later that year, he borrowed money from Greeley to establish the town’s first newspaper, the Greeley Tribune.

He named the paper after his former place of employment, The New York Tribune. The colony got off to a less than desirable start, as the arid climate was difficult for the settlers and money continued to be an issue for the town and for Meeker himself.

Supposedly, Meeker borrowed more money to build himself and his family a home. In 1870, an impressive structure at 1324 9th Avenue was built in Greeley for the Meeker family.

Some claim his intention was to show the people of Greeley that the city would succeed and that his construction of a permanent dwelling solidified his commitment to the permanence of the community. 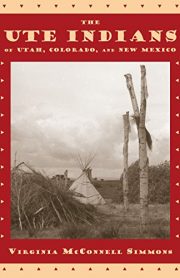 The Ute Indians of Utah, Colorado, and New Mexico

“A well researched history of the Ute Indians and the areas they lived in. Virginia Simmons discusses various stereotypes made by those who first encountered the Utes and sets the record straight. The Utes were an important element in the regional history of Colorado, Utah and New Mexico.”
– Stephen Hyatt, Amazon review

Though Meeker was considered by most to be a fairly accomplished author, he was apparently not as skilled as an editor, farmer, and businessman. Nonetheless, he grew to be a popular figure in the Colorado territory and was selected to attend a convention in St. Louis as a Colorado representative.

Purportedly, Meeker was also in the running to serve in the U.S. Congress and as the U.S. Secretary of Agriculture.

His popularity could not save his failing businesses, however, and Horace Greeley’s death in 1872 only made problems worse for Meeker. By the time of Greeley’s death, Meeker wasn’t able to pay back the funds he had borrowed. Greeley’s daughters then threatened to sue Meeker for the unpaid amount.

In 1877, Meeker suffered further when his son George passed away of tuberculosis. Struggling emotionally and financially, Meeker sought out new opportunities.

In 1878, Meeker found out about a salaried job that was available in northwest Colorado. The Indian agent job paid well and, perhaps, Meeker thought taking the position could help his financial troubles.

Meeker sought out recommendations from Colorado’s Senator Teller and a few other newspaper contacts to secure the position. His efforts were successful and he was named the Indian Agent of the White River agency.

Before his appointment, Meeker did not have an extensive knowledge of the Ute people or their way of life. The orders Meeker received from the federal government included increasing agricultural activities, relocating agency buildings, and pushing the Ute people towards assimilation.

When Meeker relocated the agency buildings and attempted to increase agricultural practices, he completely disregarded the Ute peoples’ relationship with the land. He also refused to see the importance that the Ute people placed on horses.

His relocation of the agency buildings caused conflict with the native people, as they were previously used as a horse pasture.

Tensions Leading to the Meeker Massacre

Following further orders, Meeker instructed his employees to plow up a Ute horse racing track in order to transform the area into harvestable crop land. This act was completely unacceptable to the Ute people.

Meeker was not an easy man to negotiate with and he refused to make any concessions in terms of land or other assets to the Ute people. The Utes felt that Meeker was not only forcing his ways of life upon them, but that his actions were an outright attack on tribal traditions.

Tensions continued to grow between Meeker and the local Ute leaders. During the summer of 1879, Ute chief Johnson and Meeker had a physical confrontation. During the scuffle, Johnson pushed Meeker and the agent apparently hurt his arm. After their confrontation, Meeker sent a telegram to his bosses in Washington, D.C. and alerted them that he was in danger.

Amidst rising tensions, Meeker began to fear for his life and requested the aid of federal troops. The Utes felt that troops entering their reservation was an act of war and they warned Meeker of that.

Unfortunately, their warning was not heeded by the troops, who advanced towards the agency and entered the reservation lands.

On September 29, 1879, the U.S. cavalry crossed into Ute territory and engaged the Utes in battle at Milk Creek. As news of the conflict spread across the reservation, the angry Ute people retaliated against Meeker and his employees.

The Ute people began setting fire to the agency buildings and killed all of the white male employees, including Meeker, who was mutilated.

In addition to the killings, the Utes captured Meeker’s wife and daughter, and another white woman, Sarah Price, the wife of one of the agency employees. The brutality came to an end on October 5th when additional troops arrived to quell the violence.

After the arrival of the reinforcements, the hostages were released, more than 20 days after they were initially captured.

Meeker’s attempt to alter the culture and lifestyle of the Utes resulted in the deaths of all male employees at the White River agency. By destroying their racetrack, killing their horses, and never considering the repercussions — though he was warned — Nathan Meeker effectively caused the horrific incident to occur.

After the Ute people retaliated and killed Meeker, Chief Ouray — though he was not involved in the incident whatsoever and had helped negotiate the release of the hostages — did his best to temper any retaliation from the angry government and frightened white Coloradans.

In the end, the US government ordered Ouray to send 12 men to Washington to face sentencing for the murder. The men were acquitted but the U.S. government decided to take a stand against the Utes and remove them from their land once again.

Meeker’s actions and resulting death effectively aided in the further removal of the Ute people from their western Colorado homeland. His death was one of the most violent incidents to occur between the Utes and white settlers and it sparked a resurgence in Native American removal from the Colorado territory.

Colorado’s white population rallied to have the Ute people removed and the federal government fulfilled their wishes.

The Legacy of the Meeker Incident

While he is celebrated for his establishment of Greeley, he is criticized for his actions against the Ute people. Overall, he’s remembered as a complex figure who ultimately caused his own death as well as the deaths of others and aided in the removal of Native Americans from Colorado.

The town of Meeker, Colorado, located just up the White River from the former Indian agency, was named for Nathan Meeker. After the end of the conflict with the Ute people, in 1879, the U.S. Army built structures to house troops while they were in the area.

Those buildings were the start of the town of Meeker. In 1885, Meeker became the first town incorporated in Northwestern Colorado.

In 1927, a roadside granite stone with a bronze plaque and wooden marker were placed on the White River site in memory of the massacre. The wooden sign boasts that there is also an arrow that points to a monument in the field beyond the sign on the spot where Meeker’s dead body was found near his office building.

In Greeley, he is still celebrated for his establishment of the town.

Today, the Meeker home in Greeley is a museum and still exists on the same plot of land that Meeker constructed the building in 1870. The home is listed on the National Register of Historic Places and visitors to the museum can learn more about Horace Greeley (the town’s namesake), the town of Greeley, and the Meeker family.

Read more about Native American leaders and stories of the West:

The Battle of Cibecue Creek & the Tragedy of Nockaydelklinne

The Battle of Cibecue Creek & the Tragedy of Nockaydelklinne

Flamed by rising tensions on Apache reservations, the Battle of Cibecue Creek was the U.S. Army’s worst military…