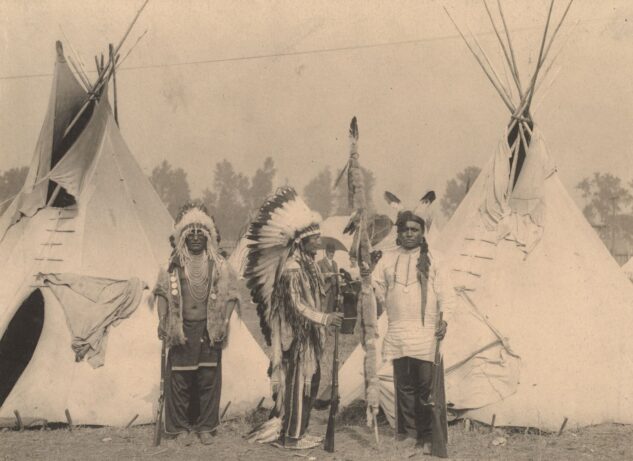 The most memorable Native American proverbs can be practical reminders to embrace unity and an earth-based spirituality in daily life.

Of course, the best indigenous proverbs and sayings aren’t collected in books or blog posts curated by a bunch of white folks like me — they’re embedded in the oral stories, traditions and histories of Native American cultures to this day.

What you see here are simply the memorable (and likely oft-misquoted) proverbs collected by an interested outside audience over the years. Like the best sayings, these simply point to certain truths; at best, they are guideposts directing readers to deeper meanings that must be contemplated — and lived — to be useful.

For more daily proverbs and inspiration, check out Guy Zona’s Soul Would Have No Rainbow if the Eyes Had No Tears and Other Native American Proverbs, Terri Jean’s 365 Days Of Walking The Red Road: The Native American Path to Leading a Spiritual Life Every Day, or Kent Nerburn’s The Wisdom of the Native Americans.

1. “What is man without the beasts? If all the beasts were gone, men would die from great loneliness of spirit, for whatever happens to the beasts also happens to man.”

2. “You must speak straight so that your words may go as sunlight into our hearts.”

4. “So live your life that the fear of death can never enter your heart.”

6. “Each one must learn for himself the highest wisdom. It cannot be taught in words.”

7. “Each man is good in His sight. It is not necessary for eagles to be crows.”

8. “Hold fast to the words of your ancestors.”

9. “We will be known forever by the tracks we leave.” 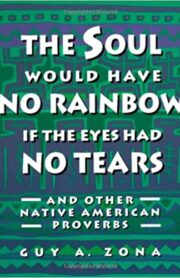 “The beautiful thing about this book (other than the title), is each little proverb is very short and easy to read.” – Mike M., Amazon

12. “Be an early riser: the game does not snuggle their heads on feather pillows.”

16. “Do not grieve. Misfortunes will happen to the wisest and best of men. Death will come, always out of season. It is the command of the Great Spirit, and all nations and people must obey.”

17. “Men must be born and reborn to belong. Their bodies must be formed of the dust of their forefathers’ bones.”

18. “When you see a new trail, or a footprint you do not know, follow it to the point of knowing.”

20. “Do not judge your neighbor until you walk two moons in his moccasins.”

21. “Ask questions from your heart and you will be answered from the heart.”

23. “Seek to make your life long and of service to your people. Prepare a noble death song for the day when you go over the great divide.”

24. “How smooth must be the language of the whites, when they can make right look like wrong, and wrong like right.”

26. “The man who sat on the ground in his tipi meditating on life and its meaning, accepting the kinship of all creatures and acknowledging unity with the universe of things, was infusing into his being the true essence of civilization.”

27. “Strength is not the only thing we must have in the world, and, in a man or a nation, it is of little use without wisdom.”

28. “All plants are our brothers and sisters. They talk to us and if we listen, we can hear them.”

29. “No person among us desires any other reward for performing a brave and worthy action, but the consciousness of having served his nation!”

30. “To give up when all is against you is a sign of being weak and cowardly.”

31. “If an innocent man doesn’t get angry, he’ll live a long while. A guilty man will get sick because of bad thoughts, a bad conscience.”

32. “How we fought for our country is written in blood.”

35. “You already possess everything necessary to become great.”

37. “We are part fire, and part dream. We are the physical mirroring of Miaheyyun, the Total Universe, upon this earth, our Mother. We are here to experience.”

38. “Friendship between two persons depends upon the patience of one.”

39. “Just what Power is I cannot explain, for it is beyond my comprehension. Those who seek it go alone that they may be tested for worthiness. It is a gift to be bestowed not only for virtue but for prayer and courage.”

40. “When you arise in the morning, give thanks for the morning light, for your life and strength. Give thanks for your food and the joy of living. If you see no reason for giving thanks, the fault lies in yourself.”

41. “Never has the earth been so lovely nor the sun so bright, as today…”

42. “Your feet shall be as swift as forked lightning; your arm shall be as the thunderbolt, and your soul fearless.”

43. “The more you ask how far you have to go, the longer your journey seems.”

45. “Man’s law changes with his understanding of man. Only the laws of the spirit remain always the same.”

48. “Would you wish that there should be no dried trees in the woods and no dead branches on a tree that is growing old?”

49. “If all would talk and then do as you have done, the sun of peace would shine forever.”

50. “Look and listen for the welfare of the whole people and have always in view not only the present but also the coming generations, even those whose faces are yet beneath the surface of the earth – the unborn of the future Nation.”

from the Constitution of the Five Nations