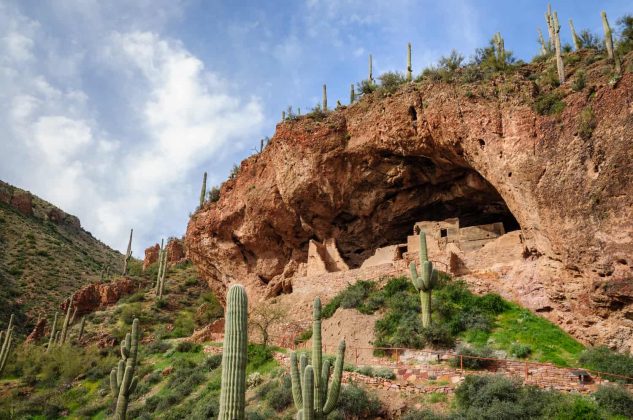 Arizona’s most well-known Native American ruins range from beloved National Monuments to fascinating dwellings located in the most unforgiving landscapes in the state.

Arizona is home to a plethora of awe-inspiring and well-preserved Native American ruins. Some are located in destinations many local residents know and love, like the Navajo National Monument. Others are scattered around parts of the state that many visitors and Arizonians alike have never heard of or seen.

The remnants of these ancient structures are enough to reveal clues about the day-to-day lives Indigenous groups lived, from how they grew and harvested crops to the ways they worshiped.

If you’re interested in learning more about these ruins or in visiting some yourself, here’s a list of some of the most notable Native American ruins in Arizona.

These ruins are thought to be so old that they pre-date recorded history. Thousands of years ago, the ancestral Sonoran Desert people formed a thriving community in the middle of a barren, ruthless landscape.

Today, this place is brimming with mysteries about the ancient farming community that once called this land home. The main attraction here is the Casa Grande ruins. Archeologists are unsure whether this structure was used as a gathering place, or as a waypoint marker to lead trade partners to the area’s vast and complex water irrigation system.

Managed by the city of Phoenix, the Pueblo Grande Museum features pre-Columbian archeological sites and a fascinating system of prehistoric irrigation canals. 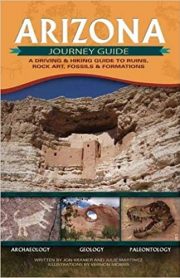 “This book makes you aware that there is much to see both near and far. A very easy to use guide to ruins.”
– Amazon review

The land on which modern day Phoenix now sits was once inhabited by the Hohokam people, who were part of a larger Indigenous group that was the first to pioneer irrigation agricultural methods in the area.

In addition to the vast network of canals, the area also features many dwelling ruins and three ball courts. Pueblo Grande was occupied from A.D. 450 to 1450 and then mysteriously abandoned like other ancient pueblo communities in the region during that same time period.

Walnut Canyon National Monument features well-preserved cliff dwellings that are only accessible on foot, but the trails here are short and easy.

One thousand years ago, the Sinagua people started settling in the Verde Valley, which gets its water from summer monsoons and spring snowmelts.

The Tuzigoot pueblo sprang up around this time on a hilltop in the heart of the valley, starting with a single structure and eventually growing into one of the largest communities in the area.

A quick hike will lead you up the hill to the 110-room village, and you’ll be treated to phenomenal views of the Verde River and Tavasci Marsh on your way there. The Tuzigoot National Monument is located just under two hours north of Phoenix.

If you were going to pick a spot in Arizona to build a home, grow crops, and raise a family, the lands known as the Wupatki National Monument today are probably a spot you wouldn’t even consider.

And yet it was here that the largest, tallest, and arguably most influential pueblo in the region stood 800 years ago: the Wupatki Pueblo. Numerous groups have called this area home for thousands of years, people who managed to grow food, track down water, and raise children.

This National Monument offers multiple pueblo ruins to explore and hike, along with guided tours, and even the Sunset Crater Volcano, which is the the youngest and largest cinder cone in the San Francisco Volcanic Field.

Featuring structures built by the Hohokam people from 1100 and 1400 AD, the Mesa Grande Cultural Park is located in the Phoenix Metro Area. The park’s most notable feature is a huge central adobe ruin and platforms.

Before it was listed on the National Register of Historic Places, it was owned by B-movie actress Acquanetta and her husband Jack Ross. The park is operated by the Arizona Museum of Natural History, and is in the process of studying the site, which features an especially well-preserved mound.

This rewarding destination features 89 separate man-made cave dwellings with 343 rooms. These caves were meticulously carved out of sandstone in the cliffs above the Verde River, and the community is thought to have been home to 250 people at its peak.

The cavates feature large main rooms for gathering and smaller alcoves for sleeping and storage. Tunnels connect the network of caves, and there’s evidence that masonry walls once partitioned rooms and protected vulnerable entrances here, though they are now gone.

Agua Fria National Monument features hundreds of ancient ruins, pictographs, and petroglyphs. But while the remnants of structures you’ll find here are educational and exciting, the area’s remarkably well-preserved pictographs are the star of the show at this monument.

Indigenous people have been calling this area home for nearly 5,000 years — the longest continuous habitation of any area throughout the Colorado Plateau.

Today, the Navajo people call these canyons home, but the ruins you’ll encounter here were built and inhabited by Ancestral Puebloans. The well-preserved cliff dwelling ruins featured in this park can be accessed by car, and much of the canyon floor is restricted to visitors to give the 40 Navajo families that reside here their privacy.

Located in the Superstition Wilderness, this cave ruin was built and occupied by the Salado, who were related to the Hohokam and lived in the area from about 1150 to 1450 AD.

Though much of this site has been destroyed by onlookers and unsavory opportunists over the years, it still is known as being one of the best-preserved ruins in the area. It hosted an estimated 100 residents in its prime, and featured 65 rooms which were carved out of volcanic tuff.

This site can be accessed from the Roger’s Canyon Trail.

Located atop a hill 40 miles south of Phoenix, these ruins hold significant archaeological importance because they’re one of the few sites in the state that were thought to have been built exclusively for defensive purposes.

These structures were constructed and resided in by the Hohokam people between about 1200 and 1450 AD. Sadly, most of the site has been destroyed over the years because of looting and resettlement, though there is still plenty to see and learn about here.

Steeped in some of Arizona’s most brutal and inaccessible terrain, the Sierra Anchas Ruins are built into dramatic cliff faces that feature a dramatic 3,500 feet in elevation change. Within these cliffs you’ll find the Devil’s Canyon ruin and the Pueblo Canyon group of ruins.

The Devil’s Canyon is known to be the more impressive site of the two, but the hardest to reach. Some of the roads leading to these ruins are now impassible, so you’re best off doing some research before trying to visit this fascinating area.

Due to the markedly dry climate, the ruins and artifacts in this area are preserved especially well. However, it’s speculated that these same rugged conditions were a driving factor in why these communities were quickly abandoned. The Keet Seel dwelling was vacated just 20 years after its construction in 1286.

The culture the Tonto National Monument seeks to educate the public about is called the Salado Phenomenon. The Salado people influenced a large number of cultural groups in the area through their intricately decorated polychrome pottery. If you camp overnight here, you’ll be treated to a dazzling display of stars.

According to the National Parks Service, the 20-room cliff dwelling featured at this monument is a testament to a people’s resourcefulness and a determination to survive and thrive within a brutal natural landscape.

The main attraction here is the Montezuma Castle, but there are plenty of other sites to explore as well, and the area is home to excellent scenery and a plethora of wild animals. The Montezuma Castle National Monument is located an hour south of Flagstaff.

Read more stories about Arizona and its frontier history: