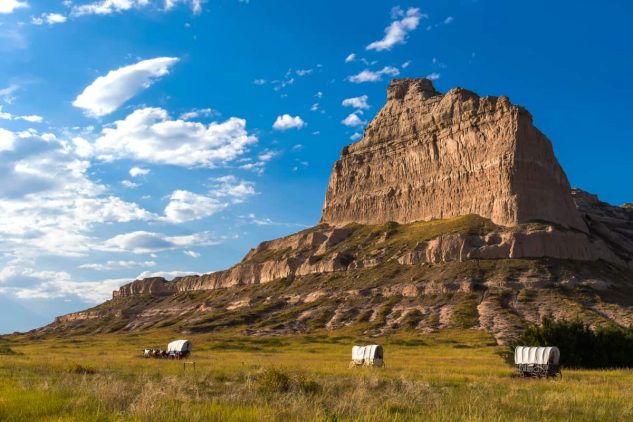 Overland pioneer stories are everywhere. There are thousands pooled in the ruts of the Oregon Trail slicing through the American West. Many are chronicles of triumph, of families starting afresh.

Some are cautionary tales of catastrophic failure. But all are heart-tugging accounts of loss of one kind or another – of loved ones, dreams, or just the forfeiture of everything familiar.

Fortunately, many of the pioneers crossing the plains understood that what they were doing was worth jotting down, as did their descendants. In one way or another, hundreds of Oregon Trail stories were recorded, ensuring that these extraordinary journeys would never be forgotten.

We’ve gathered a handful of some of our favorites here, as well as suggestions for further reading. We hope you enjoy a glimpse into the hearts and lives of the brave souls who ventured into new territory, come hell or high water.

Tamsen Donner’s life is a story of almost. Tamsen was the wife of Mr. George Donner, one of the leaders of the infamous Donner Party. Tamsen, along with nearly half of the group, died in the snowy Sierra Nevada mountains after taking an ill-advised “short-cut.”

A well-educated schoolteacher, Tamsen hoped to establish a girls’ school in California. Readers of her eloquent letters can’t help but feel a kinship with the star-crossed pioneer woman.

Knowing, as we do now, the horrific suffering awaiting the Donner Party in the mountains, Tamsen’s hopeful words evoke a haunting cringe. Before embarking on the 2000-mile crossing from Springfield, Illinois to San Francisco Bay, Tamsen wrote to her sister:

I am willing to go and have no doubt it will be an advantage to our children and to us.”

On June 16, 1846, Tamsen wrote a letter to a friend describing the ease of the trip:

Our journey so far, has been pleasant…Indeed if I do not experience something far worse than I yet have done, I shall say the trouble is all in getting started.”

Unfortunately for the Donners, the trouble wasn’t all in getting started. They would face not only death by starvation and exposure, but the humiliation of the whole world knowing that they resorted to cannibalism first.

Tamsen spent her last days caring for her dying husband before succumbing to death herself in 1847. Her daughters were rescued by the third relief party, but Tamsen refused to leave George while he was dying.

Her body was never found. She was not only eaten by the last surviving member of the party but rumored to be murdered by him as well.

For more about Tamsen or the Donner Party, check out Covered Wagon Women, Volume 1. For a gripping fictionalized diary based on Tamsen Donner’s life, check out Tamsen Donner: A Woman’s Journey, by Ruth Whitman. 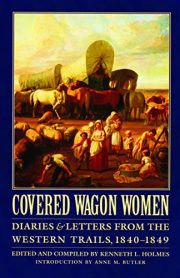 “I have read all 11 books in this series over and over, and I would recomend them all. It is like looking over the shoulder of the rugged pioneer women as they took time, almost every day, to document what would probably be the most important event in their lives.”
– Sherry Slaton, Amazon review

While the road-hardened trail guides were delivering travelers west into Oregon Territory, Patty Sessions was busy bringing forth the new lives that would flourish there. Known as the “Mother of Mormon Midwifery,” Sessions brought her much needed skills – and diary entries – across the prairie into Utah.

In 1847, the Maine-born midwife set out on the overland journey with her husband David and two grown sons. Having been driven out of their Far West, Missouri home by the Extermination Order, the Sessions family had been living in Illinois before making a break for the Mormon promised land: Salt Lake City, Utah.

The Sessions family spent the winter of 1846-47 with a pilot company of Latter-Day Saints at Winter Quarters, Nebraska, awaiting the spring thaw. In addition to caring for the sick, Sessions delivered 9 babies on the banks of the Missouri River that winter. On June 19, 1847, the Sessions family rode out of Winter Quarters, arriving in the Salt Lake Valley three long months later.

A woman’s list of daily to-dos on the trail was a long one, but 52-year-old Sessions took it in stride. Not only that, but she also drove her own 4-ox team and delivered babies.

Shortly after they arrived, Sessions’ husband died in the Salt Lake Basin area. She quickly remarried – life on the frontier was not easy for a woman alone. Soon after her marriage, her new husband took another wife, and Patty’s skills were put to good use bringing her own sister wife’s children into the world.

Patty Sessions lived in Utah for 45 years, dying in 1892 at the age of 97. According to Sessions’ records, she delivered 3,977 babies in her career.

I was leaving the South

To fling myself into the unknown. …

I was taking a part of the South

To transplant in alien soil,

To see if it could grow differently,

If it could drink of new and cool rains,

Respond to the warmth of other suns

And, perhaps, to bloom.”

Over and over, Bush and his family faced hardship – they suffered the same trials as everyone else on the Oregon Trail, but their experience was laden with bigotry as well. Bush’s difficulties were not unique – but his success was. Not only that, but his love for others despite all the hatred spewed his way was downright inspiring.

In 1844, Bush packed up his lovely wife, a white German American woman, and their five sons and headed west in search of a place to start over – a place not yet stained with the racist ideologies saturating the East.

Alongside his longtime friend and neighbor, Michael Simmons, Bush led five families and their wagons west across the prairie. Unfortunately, when they arrived, they learned that racism had not only beaten them to Oregon Territory, but it wormed its way into the law as well. The Oregon Provisional Government laws barred Bush from settling in Oregon because he was black.

Loyal friends that they were, the entire group refused to stay where Bush couldn’t. Instead, they traveled just north of Oregon Territory, settling near Tumwater, where they successfully established the first permanent American settlement near Puget Sound.

Bush’s troubles weren’t over yet, though. When the U.S. boundaries expanded into Washington Territory, Bush’s rights were again denied. A group of his friends went to court and insisted on new legislature that would allow an exception for the Bush family. They were allowed to keep their land, which they farmed with great success using the latest innovations and technologies.

Bush was exceptionally wealthy and was rumored to have financed a great deal of the trip west for others as well as his own large family. According to some, the Bush family’s wagon was loaded with silver dollars hidden beneath a false floor.

Even in tough times, though, Bush was known to be generous with whatever he had. Over the next few years, settlers flooded into the Puget Sound area; but the land was not yet providing enough food to support the influx.

Ezra Meeker, who came to the area in 1852, recalled that Bush gave away nearly his whole crop to starving newcomers.

Pay me in kind next year,’ he would say to those in need, and to those who had money, he would say ‘Don’t take too much — just enough to do you.'”

Bush’s son Owen took over the family farm when his father died in 1866. In addition to farming, Owen served in the first Washington State Legislature in 1889. Bush family descendants continued to farm the area known as Bush Prairie into the 1960s.

Harriet Scott Palmer: A Child on the Trail

Harriet Scott Palmer was just one of more than 40,000 children who traveled the trails. According to the Bureau of Land Management, about 1 in 5 westward emigrants was a child. Most of them walked all 2,000 miles, unless they were too sick or too young, in which case they suffered bumps and bruises riding in wobbly wagons.

When she was only 11 years old, Palmer and her family left their Illinois homestead in 1852 in search of greener pastures out west.

Children make the best observers: they absorb everything around them like little sponges, locking the information away for a lifetime. Over 70 years later, Palmer recorded her memories of the overland journey – and she brings a fresh, colorful perspective that only an eleven-year-old can.

Palmer recalls the chaos of preparing for the journey:

The spring of 1852 ushered in so many preparations, great work of all kinds. I remember relations coming to help sew, of tearful partings, little gifts of remembrances exchanged, the sale of the farm, the buying and breaking in of unruly oxen, the loud voices of the men, and the general confusion.”

A child’s life in the 19th century was certainly more rugged than it is these days, and the trail had a way of making children grow up fast. Palmer describes the heartbreak of losing her mother to cholera near Fort Laramie:

The passing of that dear, beloved mother was a crushing blow to all our hopes. We had to journey on, and leave her in a lonely grave – – a feather bed as a coffin, and the grave protected from the wolves by stones heaped upon it…we heaped and covered mother’s grave with the [wild] roses so the cruel stones were hidden from view. Her grave is lost. No one was ever able to find it again.”

After her mother’s death, Palmer was piled with even more responsibility on the trail. She describes one of her tougher jobs here:

It was my duty to keep up the loose stock in crossing the plains, and I was given charge of an old sorrel mare who had one eye. Her name was “Shuttleback” on account of the shape of her back. She was a big powerful animal, and when she’d get a whiff of an Indian she would kick and plunge and many a time would throw me off.”

Harriet was the sixth of nine Scott children to travel west, many of whom became important members of Pacific Northwest society. Harriet, or “Etty,” as she was affectionately known, died in Seattle in 1930 at the age of 89.

If you think Harriet Scott Palmer’s story might intrigue the younger people in your life, check out the fictionalized biography based on her life:  A Trail of Broken Dreams: The Gold Rush Diary of Harriet Palmer, Overland to the Cariboo, 1862, part of the Dear Canada series for children.

Iconic Stories of the Oregon Trail

They may be heartbreaking, but the stories of these pioneers can’t help but inspire us.

The middle-aged woman who drove oxen with one hand and cut umbilical cords with the other inspires us to welcome new adventures and embrace challenges.

The black man who refused to slow his wagon until he outran racist laws moves us to persevere, and to fight for what is right, not popular.

The mother who died in the worst disaster of the westward migration reminds us that though we may perish, our legacy lives on.

And the motherless child who grew up fast on the trail proves that we are capable of much more than we realize.

Molly Jacobson is a freelance journalist based near Miles City, Montana, where she wrangles five babies, twenty chickens, and one emotionally unstable dog. She has a B.A. in Psychology from Gonzaga University and writes for mental health blogs, history websites, two local newspapers, and anyone else who doesn't mind her flagrant abuse of the maximum allowed word count.

Fans of the television show Gunsmoke may have fond memories of the Long Branch, Dodge City, Kansass lively…

From buried caches of gold to sunken treasure, California is a bona fide hot spot for hidden treasures…