The Origins of Scalping: A True and Surprising History 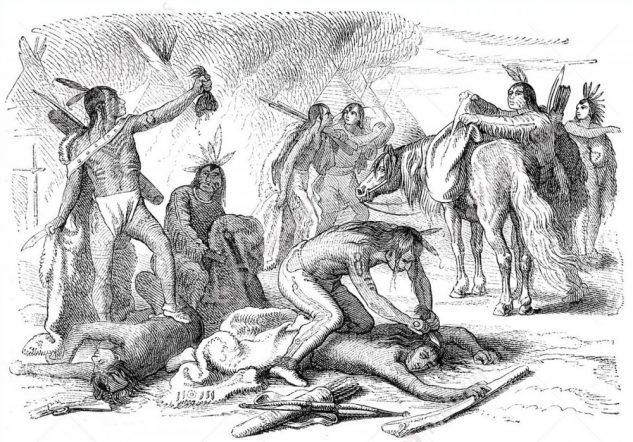 Native Americans may have invented scalping, but European contact accelerated it.

The idea that Native Americans routinely and viciously scalped their enemies is a common perception that holds to the present. Historical accounts have given strength to this belief.

One such narrative is found in a history concerning the Battle of Wabash between a confederacy of Native American tribes versus the American army in 1791. The aftermath of the battle is painted through the eyes of a survivor, Stephen Littell, who witnessed the defeat of American forces.

Awful was the scene presented to him there, the bodies of some seven hundred of the killed and wounded encumbering the ground for the space of about three hundred and fifty yards. It was a cold, frosty morning. The scalped heads presented a very revolting spectacle. A peculiar vapor or steam ascended from them all. Many of these poor creatures were still alive, and groans were heard on all sides. Several of the wounded implored young Littell to put an end to their misery.”

While this account may be true on the surface, the origins and history of scalping are far more complicated than is commonly believed.

As described by the scholar Gabriel Nadeau, scalping is …the forcible removal of the scalp, totally or in part.” Not to be too macabre, but there are several variations of this practice. For example, in the East, scalps were removed in their entirety by making a circular incision about the head then around the ears and down the neck.

After lifting up the hair slightly to make sure the skin was ajar, the scalpers would snap the head back and peel away the scalp. In the Pacific Northwest, the Chinooks peeled off portions of the face and back. On the Plains, William Philo Clark reported scalping practices in 1885.

In former years the Sioux Indians, if they had time, cut off the heads of their slain enemies and took them to their first camp after the fight, where the entire scalp was taken off.  To make it particularly fine, they kept on the ears with the rings and ornaments.”

Outsiders viewed these practices as atrocities, but scalping also served an important social function. The Encyclopedia of American Indian History notes that scalping gave prestige to the scalper since it furnished direct proof of a warrior’s prowess. A scalp in hand proved a warrior’s masculinity. It was also believed that through scalping, the abilities of the victim would be transferred to the scalper.

It was also a way of recognizing the worth of the fallen foe. The one common denominator, at least among eastern and prairie tribes, was that the scalp-lock, which is the long lock of unshaven hair customary among many Native American tribes, needed to be taken.

American Antiquity published an article in 1940 which described archaeologists examining Native American skeletons near the Illinois River. One skull was found to have circular incisions around its crown with further cuts in the back corroborating with marks of what would be scalping. This skeleton dated from the Middle Mississippian culture, usually dated to between 700 C.E. to the 1500s.

A later study published by Plains Anthropologist revealed ancient remains in Nebraska showing that people were scalped and likely survived with massive infections, all predating Columbus.  It seems clear from an archaeological standpoint that scalping as a practice had been occurring throughout North America among many tribes with an ancient origin.

According to Rationality and Society, the greatest number of cases occurred in the East, the Plains, and the Southwest.

When Europeans first began to explore the Americas, they reported instances of scalping.  Jacques Cartier reported on his second voyage in 1535 that a Native American leader had “…the scalps of five men, stretched on hoops like parchment – who waged war continually against his people.”

David H. Dye describes how Hernando De Soto reported that among Apalachee warriors “the scalps were what they most prized to display at the end of the bow with which they fought.” A member of De Soto’s expedition, Simon Rodrigues, was killed and scalped.

Another description from one of the De Soto conquistadors: “I even saw the skin of the crown (el pellejo de corona) of the monk, exhibited to me by an Indian who brought it to show.”

These accounts were taken up by artists, one of the most significant being Theodore de Bry.  As described in The European and the Indian, de Bry rendered an engraving based on a drawing by Jacques Le Moyne. This piece showed Native Americans removing enemy scalps through the use of sharpened reeds and did much to solidify general horror about the practice.

Scalping in the traditional sense was a sacred rite of warriors. In tribal warfare, which has fewer fighters than more complex civilizations, the need for individual prowess was great. Jacques Le Moyne, in rendering the drawing made notorious by the de Bry engraving, wrote that the Timucuans “held a victory ceremony in which the legs, arms, and scalps of the vanquished were attached to poles with ‘great solemnities.'”

Captain John Smith of the Jamestown colony also saw how the Powhatan Confederacy made a show for the English by hanging the scalps of a neighboring tribe in mute testament to their power. 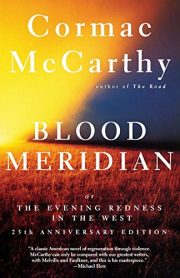 “This is a brutal and unforgiving story of a violent group of militia men who head west (or southwest) for Indian scalps. I’ve read a good bit of history from this time, and McCarthy seems to have accurately captured much of what life was like. However, the way he tells the story is what makes the book.”

Rationality and Society argues that scalping showed who was a capable warrior and who was worthy of honor. Those who brought in more scalps had more honor. As a war-trophy, a scalp was ideal, since differing hairstyles among Native American groups made the scalps easily recognizable and it was impossible to divide or fake a scalp.

Scalps were also used as a means of catharsis against a defeated enemy. Scalp dances were rituals in which an enemy was formally defeated. David H. Dye describes how the Taos in New Mexico passed around scalps and abused them through curses or urinating on them. This was all done to show how power was taken away from their enemy.

These scalps were often worn as part of a tribe member’s clothes. The Journal of American History explains how the Seminole took scalps to deny their enemies entry to the afterlife because they believed the body needed to remain whole after death.

As squeamish and as contemptuous as Europeans and later Americans were of scalping, Europeans had long practiced similar customs. The American Journal of Archaeology explains that the ancient Scythians scalped their victims.

During the same time period that European explorers were aghast at scalping, they were branding, flogging, drawing and quartering, as well as putting bodies on display. Amputation was also a common punishment from ancient times until the Enlightenment of the 1700s.

Noses being cut off or hands severed were apparently not as disquieting to Europeans as scalp-taking. However, European warfare in general was far more destructive and bloody than Native American warfare due to the latter’s smaller scale.

Despite the outcry, European colonists and later Americans saw uses for – and took part in – scalping.

While scalp-taking had been a warrior norm and Europeans didn’t invent the practice, upon their arrival in the Americas they were quick to exploit and expand it. Colonial governments, relatively quickly, offered bounties for Native American scalps.

Generally, William Kieft, the Director-General of the Dutch colony of New Netherland (future New York), has been credited with introducing the practice of paying bounties in 1641 according to Lethal Imagination.

What is notable is that Kieft has been accused of teaching Native Americans scalping. This is not true: Kieft was most likely influenced by the recent Pequot War in which New England’s Native American allies offered scalps and other body parts to the English colonists as proof of their fidelity.

Other colonies followed suit. The colonial government of Massachusetts offered twenty pounds per scalp in 1689 in retribution, and this policy expanded throughout the period and was carried into the United States.

It’s no surprise that scalping as a practice spread west as the United States grew. Research shows that scalp-taking and other trophy-taking was used by whites, Native Americans, and escaped enslaved people.

American states all through the West, as well as Mexico, offered bounties for Native American scalps and while these were supposedly targeted at specific tribes, practically speaking scalp-hunters took whatever they could find.

The Indian Frontier describes how James Kirker earned $5.00 per Apache scalp that he provided to the government of Mexico during the 1840s. It was reported that he delivered 457 scalps, mostly from American territory.

Another notable scalp-hunter was the outlaw John Glanton, whose gang collected Apache scalps. According to the Texas State Historical Association, the gang started to run out of victims, so turned to peaceful Native Americans and finally Mexicans themselves as sources of scalps.

In 1850, they seized a river ferry from the Yuma and killed Mexican and American passengers for their goods and money. The Yuma avenged the act by slitting Glanton’s throat and burning his corpse. He was not scalped.

Cormac McCarthy would later recall the exploits of Glanton and his gang in his novel Blood Meridian.

Atrocities at the Sand Creek Massacre

One of the most well-documented atrocities in the Old West was the Sand Creek Massacre. In 1864, the Third Colorado Cavalry massacred a village of Arapaho and Cheyenne in the Colorado Territory.

According to the National Parks Service, some 230 were murdered, more than half of which were women and children. One eyewitness account described the gruesome scene.

All manner of depredations were inflicted on their persons; they were scalped, their brains knocked out; the men used their knives ripped open women, clubbed little children, knocked them in the head with their guns, beat their brains out, mutilated their bodies in every sense of the word.”

Condition of the Indian Tribes: Report of the Joint Special Committee

Scalping seemed to end only when the Native American tribes of North America were firmly conquered by the United States at the end of the 19th century.

The history of scalping and the origins of scalping are still a sensitive topic. Some still hold to a European origin despite the contrary evidence. Regardless, it is clear that even if Europeans did not invent scalping, they certainly encouraged its practice and took part in it. The truth of the matter is that barbarity and atrocity in warfare seems to be a human norm.

10 Facts You May Not Know About Quanah Parker, the “Last Chief of the Comanche”

The most famous of the Comanches was Quanah Parker, who led them in their last days as an independent power and into life on reservations.

In an essay published in the July-August 1845 issue of The United States Magazine and Democratic Review, John…