7 Interesting Facts You May Not Know About Old West Outhouses 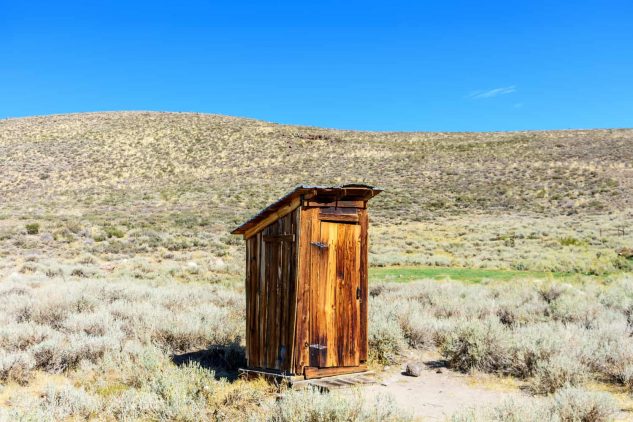 Outhouses were not just a nice-to-have part of the Old West: they were essential to household sanitation.

One thing that people of the Old West have in common with citizens of the 21st century is that when you have to go, you have to go. Human waste and its disposal has been a vexing matter for humans since before the discovery of fire.

Although human waste is a natural subject for jokes, in actuality it is a life or death matter. If not properly disposed of, it can lead to disease and death — think cholera, typhoid, and hepatitis. Scientific American, for example, reported that in 1993, over 100 people died in Milwaukee from germs that were in water contaminated by human waste.

This immortal problem came with Europeans who settled in the Americas: without sewage or plumbing, what do you do?

While there is no person who can be pointed to as the innovator, nor is there an agreed upon date of when outhouses came to be, these marvelous structures dedicated to human waste management traveled to the Old West with the settlers.

The outhouse then became a ubiquitous part of any western human waste management strategy. Let’s look at seven fascinating facts about Old West outhouses you might not know.

1. Outhouses were definitely an improvement.

The most ancient of human waste disposal methods is to dig a hole in the ground, use it to relieve yourself, then when full cover it with dirt.

The outhouse takes this basic concept and simply encloses the space for privacy. The genius of an outhouse is that it centralizes where the human waste is and encloses it. Practically speaking, for settlers of the Old West, this was the most sensible thing to do since it was important to keep water sources free from contamination, and to provide some modicum of privacy.

As ancient as this idea is, outhouses are technological improvements compared to other methods of waste disposal. Typically in pre-modern European cities, human waste was collected in chamber pots and although authorities tried to prevent it, the waste was disposed of illegally through windows or into gutters.

“Night soil,” as this was called, naturally spread disease. To be fair, urban locations struggled with these problems for centuries, as crowded cities make the use of outhouses impractical.

2. Some outhouses could be fancy.

Outhouses were what Capper’s Farmer maintains was a piece of “folk architecture” found throughout the Old West. Standard outhouse construction was rather straightforward.

According to PBS‘s Frontier Life, you dug a five or six foot hole in the ground. About the hole you constructed an oblong box with typical dimensions of three or four feet squared and seven feet of headroom. Then at the back of this holy of holies you’d install a 2-foot-high box against the back wall with an oval cutout in it leading to the hole. This was the toilet.

If you wanted to get fancy you would add a lid.

Speaking of fancy, there were some people who took their outhouse construction and decor seriously. Some outhouses were wall-papered and carpeted. Others had different sized holes (children and adults).

Some, such as those found at hotels and boarding houses, had two stories. One in Bryant Pond, Maine, attached to a Masonic lodge has three. It is apparently still in use today.

3. Farmer’s Almanacs were commonly found in outhouses, but for surprising reasons.

Your average western settler did not have toilet paper.

Modern commercial type toilet tissue did not even get on the market until 1857. So what did you do? Corncobs were one early alternative. They are supple with generally a goodly amount of surface area that can be rotated in use. 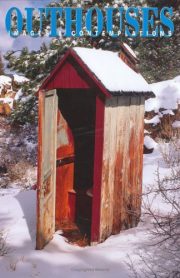 “This is a unique coffee table book. Scenes are gorgeous. It tells alot about Americana (our history). Also funny!”
– Amazon review

Another practical option were newspapers. The Sears Roebuck catalog was reputedly very popular since it was issued in newsprint which was something that approached soft and absorbent. Plus the catalog was sent to you in the mail for free!

However, the Sears Roebuck had a rival in the Farmer’s Almanac. Farmer’s Almanacs have holes in the upper left corner. This has been done since 1919, as it became so common for farmers to hang them in outhouses by a nail, where they were used for reading material or tissue paper.

As for the Sears Roebuck catalog, the rumor is that when the company shifted to glossy catalogs in the 1930s, their use declined since the catalog no longer served any practical purpose.

4. The moon symbol is not what you think it was.

Many outhouses you might see today have a crescent-shaped cutout on it. So what’s the deal with them?

The most widely published theory found on the internet, and even in otherwise reputable sources, is that outhouse doors had cutouts installed on them to improve ventilation and give some sort of light.

This is true: ventilation was a necessity and light was more than welcome.

However, this theory contends that outhouses had cutouts of a star or sun for men and a moon for women.  This went back to ancient polytheistic traditions where the sun was a male symbol and the moon for women. Since there were low literacy rates, it would make sense to use these symbols instead of writing on the outhouse door.

So how did the crescent come to represent all outhouses? Atlas Obscura relates that the going theory was that men’s outhouses were not as well-maintained, so the crescent symbol became ubiquitously adopted.

This seems logical, but as the Missouri Folklore Society points out, the theory is full of holes. First, there were probably very few sex-segregated outhouses on the frontier.

Also, the theories behind the symbolism do not stand scrutiny against common European folklore practices, which also made the moon a masculine symbol and the sun a female symbol. There is also no verifiable physical evidence for it.

It is also not clear when the practice started. It seems however, that at some time, probably in the 20th century, the crescent cutout became adopted by mass culture. However, it is clear that although today they are widely adopted, it is unlikely these were used in the Old West.

5. Outhouses smelled and there was little you could do about it.

It is obvious, but outhouses stank.

Therefore, selecting the location of an outhouse was critical. It needed to be put well away from any source of potable water, such as a well. Contaminated water would be disastrous for a frontier family.

One favored location for an outhouse may be behind a wood pile so that a settler could return to the main house with some needed wood. Other settlers would camouflage the outhouse among plantings such as trumpet vine, holly hocks, wisteria, and honeysuckle.

Outhouses were also cleaned periodically, usually on a washing day when leftover soap and water could be used to scrub down the building.  To control the smell, settlers would keep lye or lime in the outhouse and periodically pour it into the pit. This, as pointed out by PBS, rarely worked and the stench during the hot summer months must have been devastating indeed.

6. Outhouses had to be routinely emptied or moved.

The outhouse’s pit has finite space. Much like modern septic tanks, when they got full, they needed to be emptied. To do what was probably one of the most horrible jobs in history, a pair of “gong farmers” (a term from medieval Europe) would empty the pit.

One would shovel the waste into buckets and the other loaded it into a cart. This could then be mixed with rotting vegetation and used as fertilizer. Of course this job ran its risks, since such exposure to human waste could lead to illness.

The other option was to fill in the old pit, dig a new one and move the outhouse entirely. This could prove to be more practical and desirable, especially if there were other workable locations for the structure. This seems to be the more used option, especially in a frontier life where space was widely available.

7. Outhouses were a major project during the New Deal.

In a remarkable proof of just how important outhouses were, they became a major project during the New Deal era.

This, as maintained by the New England Historical Society, was to promote public health.  As a result, the Works Progress Administration (WPA) built 2.3 million outhouses in rural areas.

These were cutting edge outhouses as these types of things go. Each was built on a concrete vault which served as the storage tank, as well as the foundation for the 4″ x 5″ frame. It also contained screened vents as well as toilet lids to prevent fly infestations.

As part of the program, these outhouses were offered to families. The labor was free and the family had only to pay the $17 in materials to build it if they could afford it. As the New England Historical Society writes:

They earned several nicknames, including the Roosevelt Outhouse, the Roosevelt Room, the White House, the Relief Office or simply the Eleanor. Some people excused themselves by saying they had to visit Miss Perkins, meaning Frances Perkins, FDR’s secretary of Labor.”