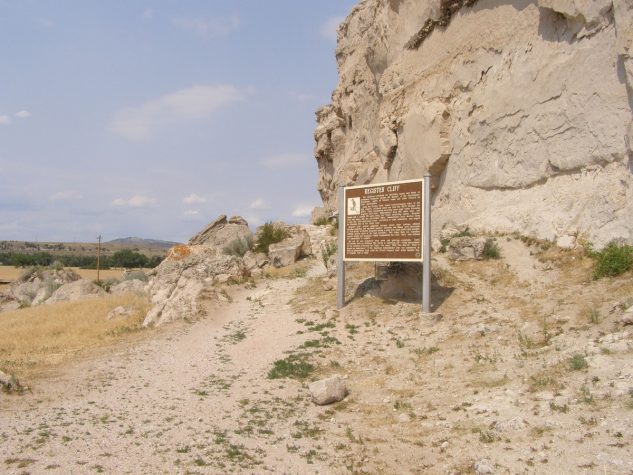 Just like a large, blank building wall in an inner city tempts graffiti artists, a massive, soft sandstone cliff along the westward trail in the old west beckoned pioneers to carve their names, dates, and brief messages.

But while today’s city walls are merely a venue for artistic expression — or vandalism, depending on how you look at it — the chalky outcropping at Wyoming’s Register Cliff served as a permanent record of the pioneers that passed by on their journey to find a new home.

As its name implies, Register Cliff acted much like a hotel’s registry book as a record of the people who passed through.

Where is Register Cliff?

Register Cliff is located in eastern Wyoming, not far from the Nebraska state line, in the town of Guernsey. Although Guernsey, which was named after prominent cattle rancher C.A. Guernsey, was officially incorporated in 1902, settlers from the East frequently passed through the area much earlier.

Explorers, trappers, and traders were drawn to the region in part because of the North Platte River, a waterway that played a significant role in westward expansion.

A major tributary of the Platte River, the North Platte River was first mentioned when a member of the Astor Expedition, Wilson Price Hunt, wrote about his journey back to Missouri from Fort Astoria in 1811. 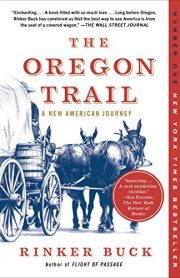 “I have been to Guernsey and saw the Register Cliff there and the Ruts coming up from the river (about 4 ft. deep), so that is why I bought the book. I soon realized how wonderful it was.”
– Shirley M. Desy, Amazon review

Register Cliff and the Trail West

Missionary Marcus Whitman followed the North Platte River in 1835 when he travelled by horseback to Oregon with the goal of converting the Native Americans to Christianity. When he made the journey a second time, this time accompanied by his young wife and another couple, he proved that the trip was safe for all, including women, despite what the classic 1980s computer game would later tell us.

This set the stage for the Great Migration of 1843.

The three trails split off in different directions further west of Register Cliff.

The Writing on the Wall

Register Cliff was a common stopping point for pioneers travelling on the Oregon, Mormon, or California trails. It was the first camp west of Fort Laramie. The sheltering cliff face and the proximity to the river made it an ideal place to camp for a few days to rest the horse and let the cattle graze in the grassy meadows.

The tall limestone cliff was also the perfect spot for pioneers to leave their mark. The rock was soft enough for folks to easily carve their names, the date, and, perhaps, a message to loved ones who may pass through at a later date.

The cliff face was even used as a way to commemorate the loss of a family member on the trail west. The dates carved into Register Cliff offer evidence that the peak years for the westward migration occurred in the 1840s and 1850s.

The earliest known date on Register Cliff is 1829, so it was most likely left by a trapper or fur trader. Sadly, there are modern dates and names on the cliff face as well. Before Register Cliff became a protected historic site, 20th century passersby added their names to the rock wall, sometimes obscuring much older carvings.

Register Cliff formed millions of years ago when the North Platte River carved its way through layers of soft sedimentary rock. The blue-gray limestone found throughout the area is hard enough to remain intact, yet soft enough to be at the mercy of erosion. Many of the carvings on the cliff face have been weathered away by wind and rain.

It marked the halfway point on the Oregon Trail.

Other Named Rocks on Overland Trails

Register Cliff and Independence Rock are just two of a number of name rocks found throughout the Old West. At various points along the Oregon, Mormon, and California trails, there are rock faces scarred with the names and dates of pioneers that stopped there on their journeys.

Names Hill in western Wyoming is another such relic from the days of the Oregon Trail. So is Register Rock, located near American Falls, Idaho. These historic markers have, as their names suggest, served as a registry of information for modern day historians and genealogists.

A Stop on the Pony Express

During the short-lived, yet legendary time of the Pony Express, the mail delivery service between St. Joseph, Missouri and Sacramento, California, a stop post was established near the base of Register Cliff in Wyoming.

The Pony Express operated from early April 1860 to late October 1861. According to records, the Pony Express stop at Register Cliff opened in 1861, so it wasn’t in existence for very long.

Still, it was a vital stop on the 1,800-mile, 10-day mail route — a place where a rider could get a quick bite to eat before mounting a fresh horse for the next leg of his journey.

The People Behind the Names

Historians and preservationists have photographed and recorded the names and inscriptions on Register Cliff, knowing that the carvings will eventually be erased by the power of erosion. The information is available to history buffs and people tracing their family trees.

For one family in particular, Register Cliff contains multi-generation data. On June 23, 1850, a 19-year-old man named Alvah Hunt Unthank etched his name and date on the limestone face of Register Cliff.

His gravestone can still be seen 88 miles up the trail in Glenrock, Wyoming. Nearly twenty years later, Oliver Nixon Unthank, a cousin of Alvah’s, passed along the same route. He added his name and the year, 1869, next to Alvah’s name. Much later, in 1931, Oliver Brandon Unthank, the son of Oliver Nixon Unthank, also signed Register Cliff with the year of his visit, 1931.

Another name on Register Cliff is that of A.A. Withrow. According to his descendants, this was the carving left behind by Abel Alderson Withrow, a saddle maker from Indiana who had relocated to California. He was a member of the “Fighting Californians,” a mounted division that was assigned to accompany the 2nd Massachusetts Cavalry during the Civil War.

In the 1890s, a rancher named Charles A. Guernsey took ownership of the land on which Register Cliff sits. It was part of his massive cattle operation. Guernsey’s success as a cattleman earned him a place of prominence in the region.

The tiny town that sprang up nearby was named in his honor. Charles Guernsey ran his farm until 1926, when he sold it to Henry Frederick. Frederick and his family, like Guernsey, used the land for a cattle ranch that is still in operation today.

In 1932, recognizing the significance of Register Cliff, Henry Frederick donated the plot of land surrounding the cliff to the State of Wyoming. He stated that he wanted to preserve the memories, the spirit, and the accomplishments of the westward pioneers whose names appear in the limestone.

In 1970, the site was added to the National Registry of Historic Places. Several places near Register Cliff, including Guernsey Ruts south of town and Guernsey State Park to the north along the North Platte River, feature visible ruts in the ground left from the thousands of pioneer wagons that traversed the trail to Oregon, Utah, Idaho, or California.

Deep Rut Hill in Guernsey State Park, in fact, boasts the deepest existing ruts from the Oregon Trail. Visitors to Register Cliff can follow a marked pathway at the base of the cliff where they can see the names carved in the limestone and read the informative placards to learn about the pioneers that traveled through the area more than 170 years ago.

The cliff face itself is now protected by a wire fence to keep modern-day vandals from defacing the site. Nearby, visitors can tour a small cemetery where several pioneers who died on the trail were buried. Today, the University of Wyoming maintains a digital record of the names and dates carved on Register Cliff.

Travelling along the Oregon Trail, and other westward trails, in the mid-1800s was a dangerous undertaking. Despite the hardships — or, perhaps, because of them — many pioneers thought it was important to leave a trace of themselves behind so that others would know they were there.

Register Cliff, with its expansive face of soft, chalky limestone, offered these people the ideal opportunity to record their names for posterity. Like today’s graffiti artists who see possibility in a blank wall, the Old West settlers found Register Cliff to be irresistible: the perfect spot to leave a permanent message for future loved ones or for history.

Read more about the Oregon Trail and life in the West: