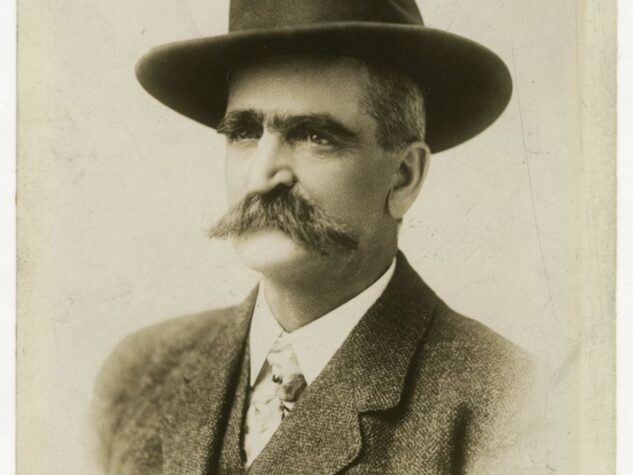 Seth Bullock sporting what can be considered one of the finest mustaches in the West. Photo credit: Wikimedia Commons

We can thank the mid-2000s HBO television western series Deadwood for introducing a new generation of Old West fans to some of the era’s more colorful characters, including Seth Bullock, portrayed by made-for-the-role Timothy Olyphant.

Although the TV show took plenty of creative liberties with historical events and plot lines, it did renew interest in Bullock and his fellow Deadwood residents.

Many famous people from the Old West walked a thin line between good guy and bad guy, but that was not the case with Seth Bullock. He stood firmly in the good-guy category. As his good friend Teddy Roosevelt once said, Seth Bullock was a “true westerner, the finest type of frontiersman.”

Here are 7 reasons why.

1. Seth Bullock was an intimidating dude.

Descriptions of Seth Bullock paint him as an imposing and intimidating figure. He was quite tall with broad, muscular shoulders. But it was his steely-gray eyes that really caused folks to quake in their boots.

It was said he could stare down a cobra … but there are no reports that he ever encountered a cobra. Only rattlesnakes. Probably.

During his tenure as the sheriff of Deadwood, a decidedly rowdy and lawless place, Bullock cleaned up the corrupt town using his steely-eyed gaze instead of his gun. Seriously: he didn’t kill anyone while serving as Deadwood’s sheriff, a role he started in 1877.

In today’s world of highly scrutinized law enforcement actions, we expect our police officers to keep their guns holstered unless things get really dicey, but in the Old West, it was assumed that sheriffs would let their guns do the talking. But Bullock did things his own way.

Seth Bullock’s hands were not entirely clean, though. Prior to coming to Deadwood, while serving as the sheriff of Lewis and Clark County in Montana, Bullock killed a man. And he did it with his gun still holstered. Here’s what happened.

In the early 1870s, Bullock attempted to bring in a horse thief named Clell Watson. During the arrest, Bullock and Watson got into a shootout and both men were slightly wounded. Watson was arrested and sentenced to be hanged for his crime.

When the authorities brought Watson to the gallows, an angry mob showed up. I’m picturing torches and pitchforks. The mob scared off the county executioner. Watson probably thought luck was on his side, but he was wrong. Bullock was determined to see Watson’s sentence carried out, so he marched up the steps of the gallows and pulled the lever himself.

The angry mob, as you can guess, got even angrier, but Bullock single-handedly held them off with his menacing eyes and his shotgun.

He was born on July 23, 1849, in Amherstburg, a town in what is now Ontario. It’s located on the banks of the Detroit River, a stone’s throw from Michigan. He grew up in Windsor, Ontario, which is an even closer stone’s throw from Michigan. There was no Ambassador Bridge linking Windsor and Detroit in those days, but one could easily row a boat across the narrow Detroit River.

That’s what Seth Bullock’s father, retired British Army Sergeant Major George Bullock, did in 1860 after he was caught embezzling from his job as the County Treasurer. To avoid jail time, George Bullock paddled his ass off and fled to Michigan.

He left his wife, Anna, and eight children behind. Anna Bullock died soon after, leaving Seth and his siblings to fend for themselves. To make matters worse, the county seized the family home and sold it at auction to pay George Bullock’s debts. Talk about a rough childhood.

By 1865, when he was 16 years old, Seth Bullock had moved to Montana to live with one of his sisters. 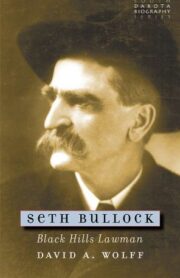 “The author does an excellent job of separating fact from fiction. The connection to Teddy Roosevelt is worth discovering.”

3. Seth Bullock was a businessman, from hardware to hotel.

Deadwood, South Dakota, was an up-and-coming gold rush town when Seth Bullock made it his home. Bullock, and his business partner, Solomon ‘Sol” Star, understood that prospecting was a tough gig, with lots of hard work and no guarantee of a payday.

A surefire way to make money during a gold rush is to sell equipment to overly optimistic prospectors. In August of 1876, Seth Bullock and Sol Star bought a lot in downtown Deadwood and opened the town’s very first hardware store called the “Office of Star and Bullock, Auctioneers and Commission Merchants,” possibly the most boring business name in town.

They did a thriving business until the building burned down in 1894.

Bullock and Star reevaluated the Deadwood market and opted not to rebuild their hardware store. Instead, they constructed a fine, three-story, 64-room hotel, the first hotel in Deadwood.

The Bullock, as it was called, offered state-of-the-art accommodations that were, for the time, rather bougie. Amenities included a shared indoor bathroom on every floor and steam heat.

Planning a summer road trip to Deadwood? Book a room at The Bullock. It’s still a fixture on the town’s main street, and there might even be more bathrooms now.

Seth Bullock and Sol Star branched out into ranching and Bullock is even credited with bringing alfalfa farming to South Dakota. Bullock and Star established the S&B Ranch Company where the Belle Fourche River and Redwater Creek converge. The ranch raised cattle and grew alfalfa.

When Seth Bullock was living in Helena, Montana, prior to moving to Deadwood, he was elected to the Territorial Senate, serving a two-year term from 1871 to 1872. During this time, Bullock was instrumental in the creation of Yellowstone National Park, the country’s first national park.

Bullock presented a motion to the Montana Legislative Council requesting Congress to include the Yellowstone region within the boundaries of Montana and that it “be dedicated and devoted to public use, resort and recreation, for all time to come, as a great national park.”

Well, the part in which Yellowstone gets added to Montana didn’t happen. Today, Yellowstone is located in Wyoming – nice try, though. But the motion to make it a national park had fared better, probably because it was wholly supported by Teddy Roosevelt.

It made its way through the House and Senate, and, on March 1, 1872, President Ulysses S. Grant signed the legislation to establish Yellowstone National Park.

If you’re hoping for a great Old West buddy story about Seth Bullock and Wild Bill Hickok, prepare to be disappointed. The two men never met each other, yet Hickok had an impact on Bullock’s life. Huh? Hear me out.

Seth Bullock arrived in Deadwood on August 4, 1876 – two days after Wild Bill Hickok was shot and killed while playing poker at a Deadwood saloon. His murder was the tipping point for the citizens of Deadwood. Tired of the lawlessness of the town, they demanded that something be done. Again, I am imagining torches and pitchforks.

This was the scene when Seth Bullock rolled into town. He had previous experience in law enforcement and a sterling reputation. He must have looked like the answer to their prayers on horseback.

A sheriff is usually an elected position, but the people of Deadwood didn’t want to waste time with an election blah blah. The governor of the Dakota Territory simply appointed Bullock to the position. That’s how you get things done.

Bullock deputized a handful of men to help him and set to work turning the one-time gold rush outpost into a civilized town.

In 1884, Seth Bullock met Teddy Roosevelt. The future president of the United States was playing rancher in the Dakotas at this time, having fled to the frontier following the deaths of his wife and mother (who died on the same day). Hard work and fresh prairie air, he theorized, was a good cure for grief.

Bullock and Roosevelt immediately hit it off. They were a lot alike – both fair, honest, hardworking, natural leaders, and adventure-seekers. Being buddies with Teddy Roosevelt came with a lot of perks. Roosevelt made Bullock the captain of Troop A in Grigsby’s Cowboy Regiment in 1898.

As vice president under President Woodrow Wilson, Roosevelt named Bullock the first forest supervisor of the Black Hills Reserve. In 1905, after he became president, Roosevelt appointed his pal Bullock to be the U.S. marshal of South Dakota. Not to be outdone, President Taft offered his own marshal appointment to Bullock in 1909.

Later, Roosevelt called on Bullock to be an officer in his 1917 infantry division, Roosevelt’s World War I volunteers, though the unit was disbanded before they were sent to France.

Teddy Roosevelt thought highly of his friend. He once wrote:

Seth Bullock is a true Westerner, the finest type of frontiersman.”

That’s pretty high praise from a bull-moose of a man like Teddy Roosevelt, who was not only a politician and world leader, but a cowboy, military hero, and Amazon jungle explorer.

Lest you think it was a one-sided friendship, Bullock did his share of favors for Teddy Roosevelt. Upon Roosevelt’s election to the presidency, Bullock organized a team of 50 men to ride their horses in Roosevelt’s inaugural parade.

When Roosevelt died in 1919, Seth Bullock worked with the Black Hills Pioneers to create a memorial to the former president on Sheep Mountain, which was later renamed Mount Roosevelt.