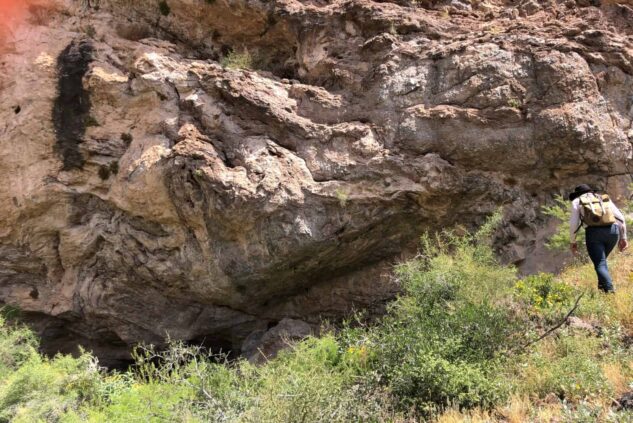 Hidden in the cliffs above the Salt River between Canyon Lake and Apache Lake, Skeleton Cave is the scene of one of the most brutal, bloody events in Arizona history.

Early in the morning on December 28, 1872, two companies of the U.S. Army’s Fifth Cavalry confronted a group of some 100 Yavapai camped out on the northern side of the Salt River.

When the Yavapai retreated into a cave in the canyon walls, it began a four-hour firefight that resulted in an estimated 70 to 80 (or more) Yavapai deaths. On the cavalry’s side, only one Pima scout was killed in action.

When the battle ended and the cave fell quiet, it became one of the most one-sided battles in the Southwest’s infamous Apache Wars, which dated back to the 1840s but escalated in the 1860s after the Bascom Affair.

For General George Crook, the battle at Skeleton Cave marked a turning point in the Apache (and Yavapai) Wars. It didn’t end the war outright, but it was a devastating blow to the indigenous population in the area.

“For the Yavapai their losses at Skeleton Cave were worse than a Pearl Harbor or 9/11 attack because the percentage of their total population killed was so much greater,” writes Sigrid Khera in Oral History of the Yavapai.

Other skirmishes and battles took place that winter and the following spring, including the Battle of Turret Peak, but none were as pivotal as the battle at Skeleton Cave.

“The attack on the Yavapai at Skeleton Cave was the most decisive and bloody in loss of life to occur during Crook’s 1872 – 1873 winter campaign,” write Alan Ferg and Norm Tessman in Vanishing River.

In April 1873, just a few months after the cave battle, most Yavapai surrendered and accepted reservation life at Camp Verde. They were forced to move to the San Carlos Apache Indian Reservation several years later, and were allowed to leave that reservation in the early 1900s. Today, Yavapai reservations exist in Prescott, Camp Verde and Fort McDowell.

For a more in-depth history of the battle and the bigger historical context, there’s a summary at the American Pioneer & Cemetery Research Project. You can also read about the battle in Vanishing River; Oral History of the Yavapai; Surviving Conquest; and The Diaries of John Gregory Bourke, Volume One.

Because of its remote location, the cave fell into relative obscurity until 1896, when a reporter with the Phoenix Herald recounted a man discovering the cave a few years earlier. A rancher and his friend found the shelter again in 1906, and the first photos of the cave were taken in 1908 by Walter J. Lubken.

Today, Skeleton Cave is on the National Register of Historic Places and sees a trickle of hikers willing to scramble through the Salt River Canyon to get there.

As a fan of Arizona history, hiking and having any excuse for an adventure, I knew I had to get out there as soon as I heard the cave’s story. It took a few years to get a plan and find the time, but in April 2019 my brother and I packed his canoe and hit the Apache Trail.

Related read: The Battle of Cibecue Creek & the Tragedy of Nockaydelklinne

Getting to Skeleton Cave

There aren’t many ways to get to Skeleton Cave — you can hike in from the north or come from the west by river.

Though we were both in good shape and the weather was nice, an 18-mile round trip hike through the April desert didn’t sound as fun as paddling through the winding bends of Canyon Lake.

After a false start on one of the service roads closer to Apache Lake, we launched from the Canyon Lake campground boat ramp, but there are other spots to start as well.

If you have a boat with a motor, this part of the journey is probably quick and easy. But where’s the fun in that?

The way out took a few hours and by our estimation around 6 to 7 miles of paddling, but it went by faster than expected. We talked the usual topics while adventuring: Joseph Campbell, religion, the universe, what to do before you die — that sort of thing.

After a bit we took a break in the depths of Canyon Lake, moored against a rock ledge to stretch our legs and catch up on water.

Then back at it: that slow river paddle-and-grind.

Finding a Way Up

In the early afternoon we hit the river’s elbow signaling the cave’s whereabouts. We prepped then headed up the steep, cactus-thicketed canyon cliffs.

After a few reroutes and back-and-forths we found the best way up and kept climbing. The hike itself isn’t difficult, but route-finding is the challenging (and best) part of the trek up the canyon.

It doesn’t take long to gain elevation from the water.[/caption]

We found a groove, kept lookin’ up and eventually hit a high ridge to take west over to where we thought the cave was located.

After climbing for about an hour, we finally approached the cave, which was hidden from our vantage until we were nearly on top of it.

It’s more of a rock overhang than anything else; still, you can see why this would make an excellent rancheria and hideout.

The cave’s floor is soft and sandy. Its human history is told on the walls: bullet marks from the 1872 battle, inscriptions from visitors in the 140-plus years since.

Other small signs of recent visitors: a rock-and-feather tribute, a cairn placed beyond the cave’s walls.

Just outside and below the cave, the vegetation’s thick and hard to get through, but you can explore either side of the opening, scrambling up the canyon for more views.

There’s nothing left in the cave today — most of the bones and artifacts were removed in the early 1900s by the Fort McDowell Yavapai tribe.

If you know the story of the cave and its place in Arizona history, Skeleton Cave is a somber, surreal place to visit.

It’s one of our state’s bleakest memories from the 1800s, a massacre in the name of progress that’s still difficult to fully comprehend.

Stranger still is the fact that some thousand feet below the cave, expensive boats cruise Canyon Lake and families play and camp at its shorelines when 150 years ago this was uncharted territory save for those small bands of people calling it home in winter months.

After an hour or so in the cave, it was time to head home.

Our drive out to Canyon Lake, the paddling and the hike up the canyon meant a relatively short time at the cave itself. But like most of our adventures, the journey was just as meaningful as the destination.

Paddling back to the campground felt longer than it had in the morning, but we soaked in the work and late afternoon scenery.

We passed the marina, the Dolly Steamboat and looked back at our last stretch of calm, open water, impressed by the distance we covered that day.

Getting to Skeleton Cave isn’t easy, and it’s not recommended unless you’re familiar with the area and terrain. It’s located on federal land, and taking anything you find is illegal, though there isn’t anything left in the cave itself. If you do go, be sure to Leave No Trace and be respectful of the land and history here.