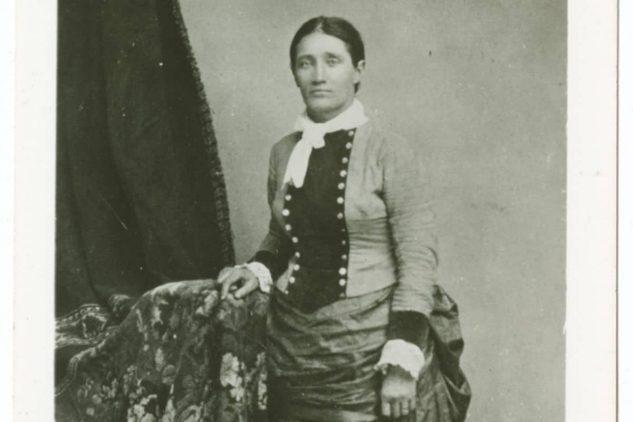 The gender imbalance of the American West’s population opened the door for women to set up shop in the oldest profession. These enterprising, hardworking, and resourceful women worked as sporting ladies, scarlet women, dance hall girls, sweethearts of the night, or soiled doves — all just colorful euphemisms to soften their real titles.

They were often shrewd businesswomen who ran their brothels with a strict set of standards. Several of them parlayed their careers into lucrative businesses that allowed them to retire in comfort and without reliance on a husband.

For other soiled doves, however, their chosen career path led them further astray. It was not uncommon for an Old West prostitute to die of gonorrhea or syphilis, or from a botched abortion. 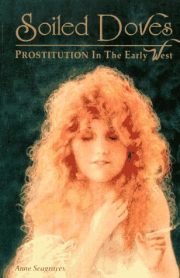 “The Soiled Doves of the Old West were humans too, though ignored in most history books. This scholarly effort fills in their part of the history.” – Amanda H., Amazon review

Suicides and overdoses were also common among the soiled doves. Prostitution, as you can imagine, was a dangerous job. The women were defenseless against the brutalities and assaults of their clients.

Prostitution in the Old West was widespread. In every mining camp, railroad stop, trading outpost, boom town, or military fort, a lonely man looking for love could find a woman willing to tend to his needs — for a price. In the smaller settlements, only one or two soiled doves might be found.

Often, they worked out of a room above the local tavern. In larger towns, the prostitutes worked out of brothels in the community’s red-light district. Although town planners tried to keep the morally questionable activities off the main city street, they also benefited from the money the brothels brought into the town in the form of fees, taxes, and licenses.

A few soiled doves became surprisingly important figures of the Old West. Let’s look at the fascinating careers of a few of these ambitious ladies who left their marks on the male-dominated Old West.

The origins of Martha Jane Canary‘s disastrous-sounding nickname are unclear, but it is known that Canary led a somewhat calamitous life. When she was born in 1852, her father was a ne’er-do-well with a dangerous drinking and gambling addiction. Her mother kept the family afloat by turning tricks on the side.

By the time Calamity Jane was 15 years old, both her parents were dead, and she was left to care for five younger siblings. She packed up the youngsters and headed to Wyoming hoping for an easier life.

What Calamity Jane found in Wyoming was the excitement of the true Old West. She took a job as a saloon dancer, but soon secured employment at the Fort Laramie Three Mile Hog Ranch‘s popular brothel.

Although Calamity Jane was successful as a prostitute, she didn’t really fit the mold. She turned her nose up at her overly powdered and rouged co-workers in their lacy corsets. She often dressed in men’s clothing, particularly buckskins.

Calamity Jane didn’t spend all her time at the brothel. She drove a team of oxen, joined cattle drives, and even served as a military scout: she was a true frontierswoman. She was skilled at shooting, hunting, riding, and roping — and drinking.

She created a persona for herself as a tough, gritty, independent Wild West woman with a heart of gold. When a smallpox epidemic swept through Deadwood, South Dakota, Calamity Jane devoted her time to tending the sick. She was also known to feed the hungry and help the poor, no matter what her own financial status was.

Calamity Jane lived a colorful life, joining Buffalo Bill Cody’s Wild West show where she toured the country, sharing the fascinating stories from her experiences. She enjoyed a degree of fame and celebrity from the Wild West Show, and, by all accounts, was a marvelous storyteller. She died in 1903.

A young and beautiful widow, Fannie Porter opened a high-end, classy brothel in San Antonio in the late 1800s. Her goal was to create a luxury experience for her clients. In her establishment, she offered her guests chilled champagne in crystal glasses, silk sheets on all the beds, and soft carpeting throughout. Porter even offered VIP treatment for special customers.

Porter was a careful businesswoman. She knew how to keep the police at bay while conducting her business. In fact, most references to her establishment from the time call it a “boarding house” rather than a brothel. She hired the youngest and prettiest girls she could and made sure that they kept themselves clean and tidy.

Fannie Porter’s establishment was a favorite stop of Old West outlaws. The Wild Bunch, the Hole-In-The-Wall Gang, Butch Cassidy and the Sundance Kid all made Fannie Porter’s brothel a rendezvous point and occasional hideout.

According to some legends, the Sundance Kid, whose real name was Harry Longabaugh, met his famous girlfriend, Etta Place, at Fannie Porter’s establishment.

Dora DuFran was unique among the soiled doves of the Old West. She got into the business at an early age — just 13 years old. She quickly learned how to work her beauty and feminine charms to her advantage and to help her earn top dollar.

She was also ambitious. When she decided to open her own brothel, she set out to make it the best one in the region. She also wanted to be the top madam in the area.

When she fell in love and married Joe DuFran, he supported her dreams and did not interfere in her business. In time, she opened more locations.

Dora DuFran kept things fresh at her brothel by rotating her girls from brothel to brothel. She had strict hygiene standards and implemented a code of conduct for her employees.

Dora DuFran had one weakness. She loved cats. All of her brothels were home to collections of cats that she lovingly fed. Because of her, the term “cathouse” became synonymous with brothels.

Wealthy, confident, independent, and cultured, Gertrudis Barcelo was a feminist ahead of her time. When she married at the age of 23, she kept her maiden name, and even kept her assets in her name only.

She and her husband opened a casino in Santa Fe in the early 1810s. Madam Tules, as she was also called, was a colorful character around Santa Fe. After the death of her husband, she plied her charms on several wealthy and powerful businessmen to get them to help her open a brothel, the first one in Santa Fe.

Barcelo catered to an elite clientele. Military officers, local politicians and leaders, and even members of the local clergy frequented her establishment. Charismatic and educated, Madam Tules attended all the parties and social gatherings alongside the upper class of Santa Fe.

According to legend, she is the reason why brothel owners are known as “Madams.”

One of the most successful and prosperous Old West prostitutes and madams, Mattie Silks, born Martha Ready, was a competitive businesswoman. She started working as a soiled dove while still in her teens and saved as much money as she could. In 1877, she purchased her first brothel in Denver.

Hers was just one of many brothels in the city’s red-light district, so she faced some stiff competition. But Silks wanted to be the best. She worked hard to elevate her brothel above the others.

She invested much of her earnings in real estate and watched her wealth grow. She bought out as many of her competitors as she could. Mattie Silks was so successful that she was called the “Queen of Denver’s Red-Light District.”

Mattie Silks made headlines for her part in the “Nude Duel.” As salacious as this sounds, the event served as an example of how journalists sensationalized stories to sell newspapers. The duel started when Mattie Silks, her lover Cort Thomson, and Kate Fulton, a madam from a competing brothel, were throwing back shots of whiskey at a Denver bar.

Silks and Fulton began to squabble, so Thomson stepped in to break up the fight and defend his girlfriend. In doing so, he punched Kate Fulton in the nose. Another man jumped to Fulton’s defense and soon, the fight had turned into an all-out brawl.

In the fray, Thomson pulled out his gun. He never had an opportunity to use it. He was knocked to the ground and subdued by onlookers. The brawl seemed over, and everyone was leaving the scene when someone approached Thomson’s carriage and fired a shot at him.

Fortunately, the bullet just grazed him. Kate Fulton was concerned that she may be arrested for the shooting, so she fled town.

The fight was an unremarkable brawl spurred on by alcohol. The local newspapers, however, dubbed the event the “Nude Duel” and journalists played up the rivalry between the two madams, Mattie Silks and Katie Fulton.

The nature of their jobs, the stories claimed, led the two women to develop jealousy and hatred for one another. By labelling the fight a duel, the reporters claimed that the soiled doves — women of questionable honor — were fighting over honor.

In reality, the women were not fighting over the affections of a man and the fisticuffs could hardly be called an actual duel. And no one was nude.

Still, the news accounts of the event brought notoriety to Silks and Fulton and shined a light of life of Old West soiled doves in the red-light district.

8 Famous (and Infamous) Sheriffs of the Old West

William “Curly Bill” Brocius was only on Arizona’s Old West scene for a little more than three years,…

Johnny Ringo was a charismatic, B-list thug with an A-list reputation in American West history. Best known as…

8 Famous (and Infamous) Sheriffs of the Old West

The Old West had a reputation for being a lawless place and time. With all the gun-toting, cattle…

John Wesley Hardin was one of the Old West’s most notorious killers: a ruthless outlaw who once killed…