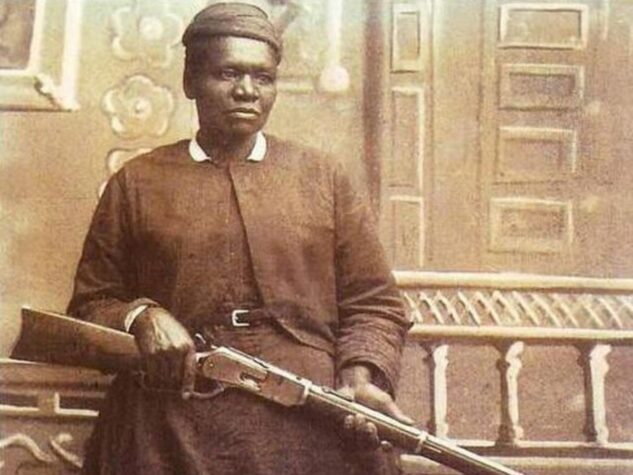 Few women and even fewer former slaves lived as authentic a life in the Old West as Mary Fields, better known as Stagecoach Mary.

Mary Fields was a beloved woman from the town of Cascade, Montana. Much of her appeal lay in the fact that her reputation and history were both novelty and a paradox.

At the time, as the only African-American in that part of Montana, one couldn’t help but notice her. She could drink and fight like any man, yet she was kind, nurturing, and motherly like a woman. She lived in a convent but was the only woman in town who was allowed to frequent the saloons.

Let’s take a look at some of the fascinating facts about Stagecoach Mary, the colorful character of Cascade.

1. Stagecoach Mary was a former slave.

When Mary Fields was born, slavery was still an integral part of Southern culture. Records of slave births were rarely kept, but Fields claimed that her birthday was on March 15.

She was most likely born in 1832, or perhaps the year before or the year after. Much later, Fields told her friends that her father worked in their master’s fields while her mother was a slave in the master’s house. When President Abraham Lincoln issued his Emancipation Proclamation, Mary Fields was a free woman.

Mary Fields took a position as a chambermaid in the years immediately following the Civil War. She found employment aboard a Mississippi River steamboat, the Robert E. Lee.

She was on the steamboat in 1870 when the Robert E. Lee raced another steamboat, the Natchez, from New Orleans to St. Louis. Fields’ employer, the Robert E. Lee, won the race by arriving at the finish line in just three days, 18 hours, and 14 minutes.

Mary Fields often entertained her friends with her account of the race. The Robert E. Lee’s captain and crew, she claimed, lightened the weight on the ship by either tossing unnecessary items overboard or throwing them in the boiler. She recalled seeing barrels of resin, wooden chairs, and even sides of pork used to fuel the steamship. 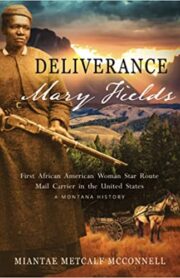 “The residue of what Mary endured can still be felt in our times. Mary was one of many over the years to work tirelessly in her own way for the principles in which she believed.”

3. Some of Mary’s best friends were nuns.

Mary Fields’ best friend since childhood was an Ursuline nun, Mother Amadeus. Stagecoach Mary once nursed Mother Amadeus back from a severe bout of pneumonia.

Mother Amadeus gave Fields a job at a convent in Toledo, Ohio, when she was sent to serve there. Fields even accompanied Mother Amadeus to her next position at St. Peter’ Convent in Cascade, Montana. At the convent in Montana, Fields tended the nuns’ flock of chickens, chopped and hauled firewood, and transported supplies. She did all the laundry for the sisters and maintained their vegetable garden.

According to legend, Mary Fields was bringing a wagon load of food and supplies to the nuns at the convent one wintery day when a pack of ravenous wolves frightened her horses.

The horses rear up and overturned the wagon.

Through the long, cold night, Fields guarded the load of food and kept the wolves at bay. She knew that her wagon of supplies was vital to the nuns, and she was determined to keep it safe until help arrived.

At the convent, Mary Fields was put in charge of the stagecoach and team of horses. A strong, 200-pound woman, Fields had no trouble commanding the stagecoach. She shuttled visitors from the train depot to the convent and other points in Cascade. Often, she sat alone at the train station all night awaiting a delayed train.

Even though Mary Field spent a great deal of her time with Mother Amadeus and the sisters at the convent, the nuns were never able to turn Fields into a “respectable lady.”

Instead, Stagecoach Mary preferred to wear men’s clothing. She drank, swore, and fought. She carried a gun on her hip and could outshoot most men with her rifle and revolver. She smoked cigars and spent her time with rough, hard-scrabble working-class men.

4. Mary Fields was kicked out of a convent.

Stagecoach Mary worked for the St. Peter’s Convent for nearly ten years and, most likely, she would have kept her job there for the rest of her life.

But it was not to be.

Mary was prone to fighting and involved in many fist fights in Cascade. She may have even participated in a duel. A local resident tried to swindle Mary out of a harness, and she responded by clocking him upside the head with a heavy rock. Word of her wild ways reached Bishop Brondell in Helena.

Bishop Brondell was the first Catholic bishop in Montana. He was stationed in Helena, the capital of the state. He began to hear stories about the rough, aggressive, African-American woman working at the St. Peter’s Convent in Cascade.

He decided that Mary’s extracurricular activities were unbecoming of a woman, particularly one employed at a convent. He sent word to St. Peter’s Convent that Mary was to be fired and removed from the premises.

Accompanied by Mother Amadeus, Stagecoach Mary traveled to Helene to plead her case before Bishop Brondell. The bishop was not moved by Mary’s pleas or by Mother Amadeus’s descriptions of the vital work Mary did for the convent. He insisted that Mary must leave the convent at once and seek employment elsewhere.

5. Mary Fields only drove a stagecoach for eight years.

However, her career as a stagecoach driver was not a lengthy one. She only drove a stagecoach for about eight years. After she was fired from St. Peter’s Convent, her bestie, Mother Amadeus, pulled a few strings and secured a mail route for Fields.

She even purchased a wagon and team of horses so Fields could do her mail route. Mary Fields was the second woman and the first African-American woman to have her own mail route.

One day, during a mail run, Mary Field’s team of horses bolted, leaving her badly hurt. Despite her injuries, she continued with her mail route and made a delivery to St. Peter’s Convent.

Fields expressed regret that she let the horses get the better of her and asked for repentance. The sisters jumped at this opportunity to, once again, encourage Stagecoach Mary to join them at Mass.

Fields was so shaken by the close call with the horses that she, at last, agreed to attend the service. It was a day the sisters had long waited for. One of the nuns stayed up all night to sew a pretty dress and veil for Mary to wear to Mass. By all accounts, she never wore the dress a second time.

6. By mayoral decree, Stagecoach Mary was allowed to drink in saloons.

Mary Fields had a rough side, but she was loved by the people of Cascade.

Most locals knew to stay on her good side. When angered, Fields packed a powerful punch with her sizable fists. She bet the townspeople that she could knock a person out cold with one punch and was often called on that bet. She rarely lost and no one ever challenged her a second time.

The mayor of Cascade issued a formal decree stating that Mary Fields was the only woman of reputable character to be allowed to enjoy a drink in the local saloons.

But as much as she enjoyed this special privilege, Fields drank only in moderation. There are no accounts of her getting drunk. She simply enjoyed the company. She spent her evenings in the taverns, puffing on a cigar and arguing politics.

7. Local schools closed in honor of her birthday.

In her later years, Mary Fields’s penchant for fighting eased.

She earned extra money by taking in laundry and babysitting children. She was loved by everyone in Cascade. Every year on her birthday, the people of Cascade celebrated Mary with games and gifts.

Even the local school closed for the day so the students could celebrate Mary’s birthday with her. Fields used her hard-earned money to buy candy and treats for the children, which she gifted to them on her birthday.

8. Mary Fields made an impression on actor Gary Cooper.

At one time or another, Mary Field babysat most of the children in Cascade and the surrounding area. She charged $1.50 per hour for her babysitting services, but she spent nearly all of it buying candy, small trinkets, and treats for the kids.

One boy she occasionally babysat was a child from Dearborn, Montana, not too far from Cascade. His name was Gary Cooper and he frequently visited Cascade to spend time with family there. Cooper later skyrocketed to international fame as a Hollywood actor, but he never forgot Stagecoach Mary. In 1959, he wrote a fond remembrance of her that was published in Ebony magazine.

Twice in her lifetime, Stagecoach Mary tried to open a restaurant. Both attempts ended in bankruptcy.

If there was a person in need, Mary offered them a free meal or two. She also extended credit to many locals, and for too long a time. For example, she fed a group of sheepherders all winter long on the promise that they would repay her in the summer when they were working again. As much as she wanted to help her neighbors, that was no way to run a business. Twice, it cost Mary everything she had.

Her kindness was repaid, however.

One of her friends and former restaurant patrons was Kirk Huntley who owned the New Cascade Hotel. In 1910, he sold the hotel to a newcomer, R.B. Glover. As a condition of the sale, Huntley stipulated that Mary Fields would be given all her meals at the hotel free of charge for the remainder of her life.

With her reputation for wearing men’s clothing, smoking cigars, doing hard labor and swearing, it may be easy to assign additional masculine characteristics to Stagecoach Mary.

In reality, Mary Fields had many feminine qualities that her legend downplayed. She wore dresses and skirts, rather than trousers. She was a motherly figure to the children of Cascade, and she had a strong nurturing side.

Her flower gardens were the envy of her neighbors, and she was an excellent cook. Although she served as a stagecoach driver and mail route driver, she also took more traditionally-gendered roles as well. She babysat, worked as a maid, washed laundry, and cleaned houses.

An avid baseball fan, Fields unofficially adopted the local baseball team. For every game, she presented the players with buttonhole boutonniere, hand made from the flowers in her garden, for their jerseys. She offered full-sized bouquets for players who hit home runs.

Mary Fields rightfully earned her reputation as a hard-working, rough-around-the-edge, fighter, she was also delightfully charming, compassionate, and a good friend to the people of Cascade.

Want to learn more about the Old West’s most famous and infamous stories?