15 Western-Inspired Things to do in Prescott, Arizona 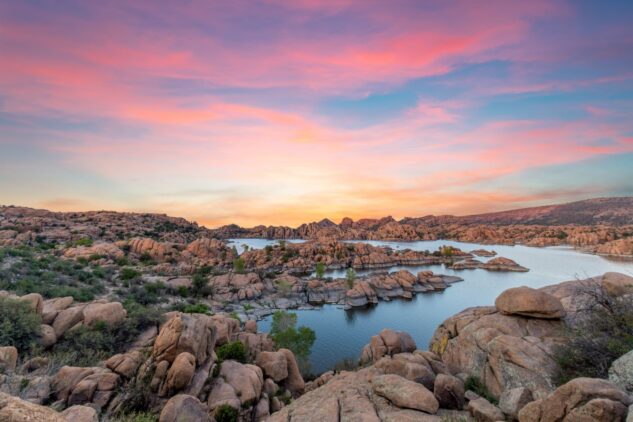 Prescott’s unique history makes it one of Arizona’s most interesting places to visit for families, history buffs and hikers looking for a cool getaway in the hills.

When gold was found in the creeks around Prescott in the 1860s, a wave of miners and settlers soon turned the new town into the Territorial Capital of Arizona. The capital eventually moved to Phoenix, but not before Prescott solidified its reputation as a wild frontier mining town.

Today’s tamer version of Prescott may have fewer saloons and bar fights, but its hardscrabble heritage is still on full display, from the historic buildings along Whiskey Row to the world’s oldest rodeo held every Fourth of July.

Here are 15 of the best things to do in Prescott, from outdoor activities for the family to the best places to visit while you’re moseying around downtown.

Best Outdoor Things to Do in Prescott

The lake isn’t huge, but there’s plenty to explore — hiking trails, a playground and picnic tables make it an easy place to spend most of the day. There’s a boat ramp for electric boats, canoes and kayaks, and the lake’s stocked with trout, bass and catfish.

When Prescott heats up in the summer, it’s a great place to cool down in the pines.

Instead of going south into the forest, you can also hit the lakes of the Granite Dells just north of Prescott. Here, massive granite boulders and formations form two reservoirs, Watson Lake and Willow Lake, and there’s just as much to do on the rocks as on the water.

Rock climbing’s popular in the 380-acre park, and you can find a local climbing instructor for quick beginner lessions. More moderate exercise can be had on mellow trails near the lakes, including Watson Lake Loop and Peavine Trail.

In summer, you can camp at Watson Lake, and though there’s no swimming, boat ramps are open to gas or electric boats. You can also rent kayaks, canoes and paddleboards at Prescott Outdoors.

Prescott’s largest lake is also one of the most popular spots to go camping near water in Arizona. On the south side of Lynx Lake is Hilltop Campground, where 38 sites in a few loops offer just enough quiet and seclusion from the lake’s shore.

On the west side is Lynx Campground, which isn’t far from the Lynx Lake Cafe, Store & Marina, where you can load up on supplies, food and boat rentals. There are more than 12 hiking trails in the area, including Lynx Lake Loop Trail, which circles the 55-acre reservoir.

Swimming’s now allowed at Lynx Lake (and all Prescott National Forest lakes), and though there aren’t any designated swim areas, the North Shore Picnic Site, South Shore Boat Ramp and marina are all good spots for a cool dip.

4. The Highlands Center for Natural History

The Highlands Center for Natural History is an under-the-radar place for kids and adults to enjoy Prescott’s outdoors while learning about local flora and fauna. Its 80-acre property is located near Lynx Lake, so it’s easy to spend a full day in the area between the lake, nearby hikes and the nature center.

No matter what time of year you visit, there’s always something going on at the Highlands Center, and their calendar of events includes programs, classes and tours for explorers of all ages.

Heritage Park Zoo doesn’t get as much love as Out of Africa an hour east, but it’s still worth a visit to the cozy 10-acre sanctuary. The small-town feel of the zoo might give you Tiger King vibes, but don’t fret: Heritage Park Zoo is one of the most well-respected animal non-profits in the state, and they’re at the forefront of animal conservation and education programs.

The zoo houses gray wolves, for example, who aren’t quite ready to be released into the wild through local species survival plans. In addition to wolves, you’ll find other large animals like a mountain lion, lynx, black bear and leopard.

Thumb Butte is Prescott’s most prominent natural feature, rising to just over 6,500 feet a few miles west of downtown. It’s also home to Thumb Butte Trail #33, one of the area’s most popular hiking routes. The main trail’s just over two miles long, though you can connect to several spur trails to make for a longer trek.

For a more challenging option, take the loop clockwise to tackle the steeper route to the summit. The views up top are stellar, but there can be closures due to local peregrine falcons nesting nearby. For closure updates checkout the hike’s AllTrails page.

The quickest way to get from Phoenix to Prescott is I-17, but a more leisurely route — the “back way” — takes you through Wickenburg, Congress and Yarnell, where you’ll find Granite Mountain Hotshots Memorial State Park. The park is a somber but fitting tribute to the 19 firefighters who lost their lives fighting the Yarnell Hill Fire in June 2013.

Two trails connect the trailhead to the firefighters’ fatality site: the Hotshots Trail is lined with granite memorials dedicated to each firefighter, and the Journey Trail leads to a large memorial where the hotshots perished. The roundtrip hike is just over seven miles and heat can be a factor, so stock up on water before heading out.

Mortimer Farms, about 20 minutes east of Prescott, is a family-run enterprise offering the complete farm experience: country store, animals, you-pick vegetables and more. Farm rides around the property make this an excellent place to spend the day with kids.

Check out their harvest calendar before heading out, and the event calendar for festivals and programs. Summer’s a great time to visit and pick strawberries, but the best time to come may be in October, during the farm’s renowned Pumpkin Fest & Corn Maze. In the owners’ words, it’s the “festival that made us famous.”

Best Historical Things to Do in Prescott

“The past contains knowledge that the future cannot forget,” wrote Sharlot Hall, one of Arizona’s earliest journalists and historians. Her contributions to Arizona history are immense, and the Sharlot Hall Museum is a culmination of decades of work, research and conservation of the state’s past.

In addition to museum exhibits and programs, the 11-acre campus includes eight historic buildings, including the Governor’s Mansion, Fremont House and a replica of Prescott’s first schoolhouse. The property allows visitors a unique peak into life in the Territory — and the hard work Hall put into preserving the stories and places of Arizona.

Long before miners and settlers occupied Prescott, the area was home to pre-historic and historic indigenous tribes like the Yavapai, who took advantage of the region’s plentiful natural resources.

Today, less than 200 members remain in the Yavapai-Prescott Indian Tribe, but some of their cultural and historical contributions are on display at the Museum of Indigenous People, Prescott’s lone museum dedicated to Native American cultures.

The museum also displays exhibits and artifacts from other tribes around the Southwest and Mexico, and offers Native American artists a platform for sharing their work — check their calendar of events to see who’s coming to town next.

Related read: 15 Native American Ruins in Arizona that Offer a Historic Glimpse into the Past

Back in 1965, a few American West artists in Sedona got together and founded Cowboy Artists of America, a collective dedicated to preserving Old West artwork. One of those artists was George Phippen, and today the museum bearing his name continues in their mission to collect and preserve American West paintings and sculptures.

The museum’s main exhibitions house nearly 800 works of art, and rotating exhibits highlight new artists throughout the year. Every Memorial Day, the museum takes over the courthouse plaza during their signature western art show and sale, where art collectors can peruse and purchase their favorite works.

In July 1888, a few cowboys, ranchers and businessmen in Prescott got together for a “cowboy tournament,” complete with prizes and probably lots of gambling. It must’ve been a good time: more than 130 years later, Prescott still holds the world’s oldest rodeo every Fourth of July.

The festivities begin in late June, and each year more than 25,000 visitors flock to Prescott to see the action. The rodeo grounds just northwest of downtown hold all kinds of performances and attractions over the 7-day festival, and a parade through downtown Prescott is the patriotic highlight of the annual tradition.

Best Things to Do in Downtown Prescott

The courthouse square is Prescott’s beating heart, and has been since the 1860s, when the town was laid out around the four-acre plaza area. The current Yavapai Courthouse was built in 1916 and still makes an impression on all who visit the downtown center.

In spring and summer, the square’s grassy areas and iconic gazebo fill with locals and visitors enjoying the weather, and festivals and markets are held here throughout the year. In early December, the plaza’s lit up by an impressive showing of Christmas lights after the traditional Christmas parade.

Along the square you’ll find historical tributes to Prescott’s past — the people and events that shaped what the town is today.

“Be sure to read through Prescott’s colorful timeline, imprinted in cement in front of the courthouse,” says Colleen Lanin, founder of Travel Mamas. “Bring a Frisbee or ball for some playtime with the kids, or just walk the grounds.”

In its gold mining heyday, Prescott attracted all types: miners, gamblers, outlaws, con men, merchants, hussies — you name it. It’s no surprise that at one point there were more than 40 saloons in the area and nights around the courthouse plaza were wild as hell.

What stands as Whiskey Row today — the 100 block of South Montezuma — was built after the “Great Fire” of 1900, and you can still throw ’em back at establishments like Arizona’s oldest saloon, The Palace, where the Earps and Doc Holliday once congregated (in its pre-fire iteration) before moving down to Tombstone.

Being one of the best Old West towns still in existence also makes Prescott an antique gold mine. If you’re into American West memorabilia — old books, postcards, even historical firearms — you’ll love the modern-day treasure hunting around town.

Cortez Street just north of the square is home to a row of antique stores, and there’s more scattered around Prescott. For books, check out The Old Sage Bookshop tucked inside Hotel St. Michael, where you’ll find unique American West and Native American works.