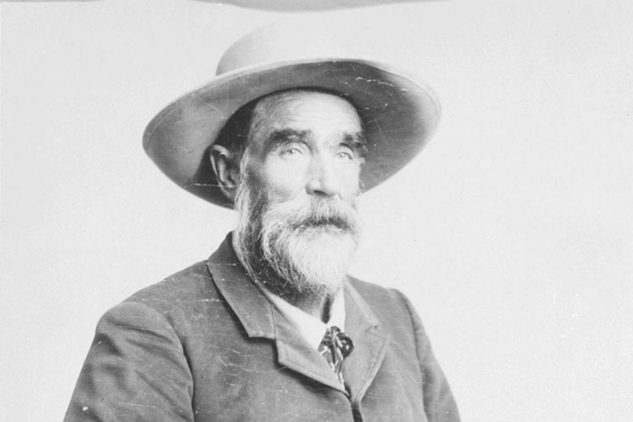 A prospector, scout, frontiersman, and the superintendent of overland mail for the Arizona territory, Thomas Jeffords was a natural people-person who had a way of putting folks at ease and making them feel comfortable.

In the 1860s, the overland mail routes in Arizona ran through hostile Apache land, but Jeffords found a way to ensure safe passage for mail carriers through the region. He befriended infamous Apache chief Cochise, and negotiated peace agreements with him.

Tom Jeffords and Chief Cochise developed a genuine friendship built on trust and mutual respect. According to some legends, the two became blood brothers, which is why Elliot Arnold chose the title Blood Brother for his 1947 novel about the friendship between these two men.

Although many aspects of their friendship have been exaggerated for Hollywood, Jeffords and Cochise did maintain a close relationship throughout their lives. When Chief Cochise died on June 8, 1874, Jeffords kept secret the whereabouts of his friend’s grave.

Here is the story of these two remarkable men and their even more remarkable Old West friendship.

Thomas Jefferson Jeffords was born on New Year’s Day in 1832. He grew up on the shores of Lake Erie and, together with his four brothers, became a merchant sailor on the Great Lakes. By the time he was 24, he was captaining his own ship and had survived a Great Lakes shipwreck.

The skills he learned as a Great Lakes sailing captain were ones he carried with him his whole life. Unlike ocean voyages, merchant sailing on the Great Lakes were short jaunts, often with new crews each time.

Every few weeks, Jeffords had a new group of men to command. He developed techniques to help him quickly gain the trust and respect of his men. He earned a reputation for sticking to his work and treating every man as an equal.

He never struck it rich, though.

At the time, the mail was transported between the two towns twice a week via express riders. Under Jeffords, a weekly stagecoach was added to the route. The road wound through Apache territory and the Native American tribe did not appreciate the trespassers.

On more than one occasion, the stagecoach or express riders were attacked.

Cochise was born in 1805, but the exact date of his birth is unknown. A member of the Chokonen band of the Chiricahua Apache, Cochise grew to be a fierce warrior and strong leader.

For a 19th century man, Cochise was tall, standing over six feet in height. He was muscular, athletic, and tough. The name “Cochise,” in fact, means “oak like, or having the qualities of an oak tree.”

Cochise’s people had lived in the Southwest since long before the arrival of Europeans to the Americas. Interlopers first from Spain, then Mexico, and finally the United States moved into the Southwest.

The Chiricahua band was, at first, tolerant of scouts and explorers, but as more and more permanent settlers set down roots in the region, built farms, raised livestock, and mined for natural resources, the Apache people resisted. 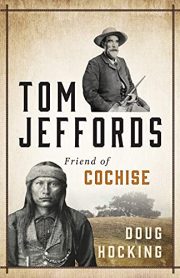 “I had not previously known of Arizona pioneer Tom Jeffords and after reading Mr. Hocking’s book I am amazed that Jeffords is not a household name in Arizona.”
– Jeff, Amazon review

Hostilities with the Apache

The Apache launched a series of attacks against intruders coming into their land, including pioneer families, military scouts, and mail deliverers. In nearly all of the attacks, the Apache were effective in overtaking their unsuspecting victims. With more people invading the area, attacks increased until the encountered grew into the Apache Wars.

The United States Army interceded on behalf of the American settlers to the region, sending soldiers to the region who engaged in a series of armed encounters with the Apache between 1849 and 1886.

The army erected forts and set up reservations for the Native Americans, but their efforts were met with more and more resistance. It was in this setting that the white American mail master and the brave Apache chief met.

According to some accounts, Tom Jeffords first met Chief Cochise when Jeffords volunteered to ride solo through Apache territory, traveling some 500 miles from Arizona to California.

Jeffords encountered a group of Apache warriors who chapters Jeffords and brought him before Chief Cochise. Jeffords had learned to speak a bit of the Apache language, so he was able to converse with Cochise.

As the two men talked, Jeffords quickly won over the chief with his bravery, respect, and trustworthiness. Jeffords treated Cochise no differently than he would have treated a U.S. general. He showed appreciation and understanding for the Apache’s grievances.

The two men bonded and formed a deep friendship.

Friendship of Jeffords and Cochise

As the story goes, Tom Jeffords and Chief Cochise built a friendship on mutual trust and respect. When Jeffords explained to Cochise why the stagecoach and express riders traveled through the region on a weekly basis, Cochise finally understood that this was not a threat to his people.

The two friends negotiated a deal in which Cochise’s warriors would allow the mail stage and express riders to travel through the region without being attacked or harassed. Cochise was true to his word, and the number of incidences of attacks on mail delivery drivers drastically decreased.

Both the novel, Blood Brothers, and the film version based on it, Broken Arrow, detail that Tom Jeffords and Chief Cochise were blood brothers. In each work, the blood brother ritual is explained.

The sharing of blood — a person’s life force — from one person to another was viewed as a way to share a family bond with someone who was born of your bloodline. It was a high honor to be invited to join one’s family in a blood bond and, in literature and in the movies, it was a gesture that demonstrated their commitment to their relationship.

A settler to the region named Billy Ohnesorgen wrote in a letter that Tom Jeffords was “a blood brother of something of Cochise.”

In Jeffords’s own obituary, published in February of 1914, Chief Cochise was identified as his blood brother. As endearing as this notion is, however, there is no evidence that Jeffords and Cochise practiced the blood brother ceremony.

In fact, there is no evidence that the Apache people, or any of the Native American tribes, used blood bonding rituals. They had other rituals to adopt outsiders into the tribe. Regardless, the two men treated each other like brothers.

Cochise even called Jeffords Chickasaw, the Apache word for “brother.”

To end the Apache Wars once and for all, President Ulysses S. Grant ordered General Oliver Howard to go to the region and negotiate for peace. He naturally turned to Tom Jeffords for help.

Jeffords respected the work that Howard did in helping former African American slaves as the head of the Freedmen’s Bureau. Jeffords was committed to racial equality, and he believed that Howard would treat Chief Cochise’s people with the honor and respect they deserved.

General Howard hoped to meet with Chief Cochise, but he needed to find him first. He asked Tom Jeffords to arrange for a rendezvous with the Apache chief. According to legend, Jeffords escorted General Howard to Cochise’s hideout deep in the Dragoon Mountains in 1872.

When they arrived, Cochise was so delighted to see his brother that he enthusiastically embraced him, to Howards’ surprise. When the negotiations started, Cochise turned to Jeffords and asked him if Howard was a man to be trusted.

Jeffords reportedly responded, “Yes, I think so, but I won’t let him promise too much.”

As part of the negotiations, Cochise agreed to end hostilities with the American settlers, but requested that his people be allowed to stay on their ancestral land. Cochise also asked that Tom Jeffords be appointed as the Indian agent for the area.

This made Jeffords the first and only agent to the Chiricahua Apache tribe. He held this position from 1872, when the treaty was signed, until 1876.

Tom Jeffords’ close relationship with Chief Cochise and the Apache people caused him backlash. Settlers in the area labeled Jeffords an “Indian lover,” and because Jeffords often sided with the Native Americans in their disputes with the white settlers, folks didn’t trust him.

Neither did the U.S. military: complaints about Jeffords, which were likely exaggerated, were sent to authorities in Washington D.C. In 1875, the U.S. government removed Jeffords from his position as Indian agent and reneged on the terms of its treaty with the Chiricahua Apache.

The Chiricahua were then relocated from their land to the San Carlos Reservation.

The Death of Cochise

Chief Cochise did not live to see how the U.S. government betrayed its treaty with his people. He died of natural causes on June 8, 1874, passing away in his home in the Dragoon Mountains.

His good friend and blood brother, Tom Jeffords, was at his side.

As legend tells us, Cochise, who was close to death, clasped Jeffords’ hand and asked him, “Will we see each other again?” as he gestured to the sky. Jeffords assured him that they would.

Upon his death, Jeffords participated in the burial of the chief. As per Cochise’s family’s wishes, Jeffords refused to disclose the location of Cochise’s grave to the U.S. military.

The friendship between Tom Jeffords and Chief Cochise became the stuff of Old West legend. In 1947, their story was fictionalized in the best-selling novel, Blood Brother, by Elliot Arnold.

In 1950, Arnold’s book was made into a major motion picture, Broken Arrow. James Steward portrayed Tom Jeffords and Jeff Chandler played Cochise in the film. Broken Arrow was unique in that it was the first movie to paint a sympathetic picture of the Native Americans and depicted their plight as a tragic tale.

The U.S. Army was shown, for once, as the enemy.

Read more about life in the American West: