7 Strange but True Stories of the American West 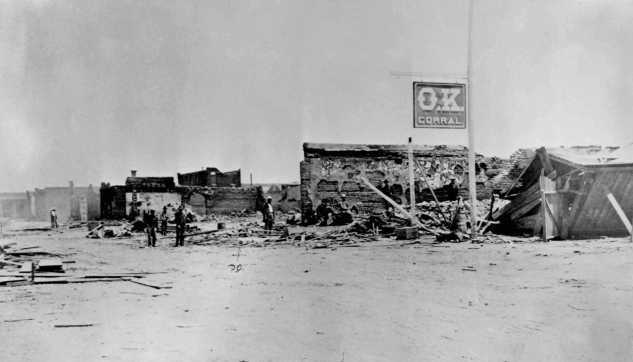 From a distasteful painting that got people killed, to the unlikely location of a Civil War battle, these are some of the most interesting true stories of the Old West.

The Old West is brimming with stories.

Like a game of telephone, accounts of events that have been retold again and again over the course of more than a century have twisted original recollections beyond recognition of what actually happened.

This is how myths and legends are born. But look a little deeper into Old West history and you’ll be treated to a myriad of true stories that range from bizarre to haunting to hilarious.

Here’s a look at several genuinely true stories of the Old West.

A painting of a bull with abnormally large genitals sparked a deadly shootout in Kansas.

The kind of Wild West shootouts resulting in someone getting killed that are portrayed in movies are typically inspired by the kinds of trouble you’d expect: gambling disputes, women, robbery.

But in 1871, two men died by gunfire over an advertisement featuring a comically well-endowed bull. When two proprietors of the Bull’s Head Saloon painted the image on the side of the building’s wall, the town flew into an outrage and enlisted the help of City Marshal Wild Bill Hickok to remove it.

When they refused, Hickok took it upon himself to remove the mural, and enraged the saloon owners in the process. In an attempt to intimidate Hickok, one of the owners told him he could “kill a crow on the wing.”

What Hickok said next would become one of the most famous sayings in the west and prescient of what was to come:

Did the crow have a pistol? Was he shooting back? I will be.”

One of the owners later tried to fire at Hickok suddenly in the street, but he drew his gun first and killed him. This is where the story turns tragic. Seeing a figure rapidly running towards him from the corner of his eye, Hickok reactively fired and the figure crumpled.

He then saw that he’d accidentally killed his friend and associate Abilene Special Deputy Marshal Mike Williams, and the accident would go on to haunt him for the rest of his days.

Camels once roamed around the American West.

Accounts of a 30-foot beast called the “Red Ghost” wreaking havoc in the Arizona Territory in the 1880s seem far-fetched now, and they clearly are.

But the kernel of truth in this story is that this so-called ghost was actually a red-haired camel. When it was caught munching on a rancher’s tomatoes, it was shot and killed. How did wild camels get to the American frontier?

Thinking camels were essential for America’s westward expansion, Secretary of War Jefferson Davis allocated $30,000 for “the purchase and importation of camels and dromedaries to be employed for military purposes.” The U.S. Army traveled to the Middle East and purchased 75 camels, believing they could carry supplies and personnel long distances to remote destinations.

The foriegn animals were brought to Camp Verde in central Texas and were used to travel to and from San Antonio. Then, the herd was split when 24 camels were sent to California for an expedition.

The trip spanned over 1,200 miles of dry, barren terrain, and the difficulty of the journey and the success of the camels seemed to prove Davis right. Back in Texas, some of the camels there were tasked with searching for new routes along the Mexican border. 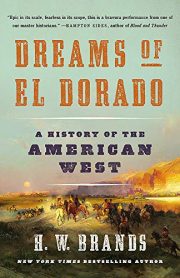 Dreams of El Dorado: A History of the American West

“DREAMS OF EL DORADO is not only very well-written, it wisely chooses a “snap shot” approach over a broad survey. Its chapters cover the major events of Westward expansion: Lewis and Clark, the Gold Rush, cattle drives, Native American struggle, the Boomer/Sooner rush to homestead in Oklahoma, etc.”
– William MacDuff, Amazon review

But while the camels appeared to have done everything they were expected to, the U.S. Government declined to purchase more. The powerful mule lobby — yes, that was very much a thing back then — pushed hard against the budding American camel relationship which they saw as detrimental for their interests.

When Texas seceded from the Union shortly before the Civil War, Confederate soldiers didn’t know what to do with the camels, so they released them. Some were caught and sold at auction. Others wandered down to Mexico, and there’s at least one account of a Confederate soldier pushing a camel off a cliff.

The California camels were sold at auction, and some were sent to Nevada while others were used for racing in Sacramento. From there, commercially imported camels began mating with the army ones, and the story gets a lot murkier as to which camels ended up where.

Alaska used to go by another name: Russian America.

Most Americans’ knowledge of modern-day Alaska’s history is understandably murky at best.

Unlike the contiguous U.S. states, Alaska is far removed from the rest of the country and is bigger than most countries around the world. To put it into perspective, Alaska is more the twice the size of Texas, which is massive in its own right.

Before America snatched up this immense and rugged piece of land, it was claimed by Russia. Russians first discovered the area in 1741, which paved the way for hunters and later business interests from the country to move into the area.

The Russians eventually expanded their reach and even created a settlement in modern-day northern California. But after the Crimean War, Russia found itself strapped for cash and desperate to unload debts.

After some back and forth between the two countries and a major delay caused by the Civil War, Russia sold the land for $7.2 million dollars for $0.02 per acre. But even though it was a good deal for America, the land acquisition wasn’t popular and only passed the Senate by a single vote.

Related read: The Floor of Heaven: A True Tale of the Last Frontier and the Yukon Gold Rush

There was almost a war between the U.S. government and religious settlers in Utah.

Outside of American historians and those in the LDS church, when most people think of Mormons, they usually only think of things like the religion’s stance on not drinking caffeine and politician Mitt Romney.

But there’s a chapter in this religious group’s legacy story that might surprise you. Led by Church President Brigham Young, the Mormons arrived in Utah in 1847 after being persecuted, and some members even being killed across the country since the religion’s founding 17 years before.

Calling the area their own “Zion,” Smith and the church parishioners thought present-day Utah would be a place they could live and worship in peace. In addition to being church leader, Young took the position of the territory’s governor.

The U.S. government saw the Mormons as a threat that could divide the country, so it sent federal troops and a new governor to Utah to replace Young and enforce federal law in 1858.

Tensions boiled on both sides, and there was real concern the meeting would devolve into war. But right before U.S. troops and Utah militiamen faced off, negotiators were able to avert a violent altercation.

When it comes to famous gunfights in the Old West, there are none more well known than the shootout that went down at the O.K. Corral in 1881.

The bloody event has been glamorized and embellished many movies over the decades, including Frontier Marshal, Gunfight at the OK Corral, Tombstone, and Wyatt Earp. Scenes in these movies typically portray a long, drawn out spasm of violence, but in reality the whole thing lasted just 30 seconds.

However, quite a lot of violence can occur in half a minute, and it certainly did in this instance. In this quick span of time, 30 shots were fired, three men were killed, and two were wounded.

Related read: The Last Gunfight: The Real Story of the Shootout at the O.K. Corral – And How It Changed the American West

Locations in the eastern half of the country typically hog all the attention when it comes to America’s unbelievably brutal Civil War. But as it turns out, modern New Mexico hosted a battle so pivotal it’s often known as the “Gettysburg of the West.”

The Confederacy hatched a plan to move north and then west from Texas, conquering areas as they went. When a group of 400 Confederate soldiers began marching east along the Santa Fe Trail on Glorieta Pass, they found 400 more Union soldiers waiting for them on March 26th, 1862.

The fight took place in a mountainous area at over 7,000 feet in elevation, and the soldiers had to contend with snow and cold. When it was over three days later, 375 men had died and the Union declared victory because they were able to secretly destroy the Confederate soldiers’ supplies during the fighting.

The battle was seen as crucial for the Union’s ability to protect the American Southwest during the war.

UFO sightings were reported throughout the west — half a century before Roswell.

Long before UFOs were a thing, there were reports ands accounts of “mystery airships.”

Reports of long, blimp-like ships floating in the air began circulating in the western U.S. in the late 1800s, a half century before the Roswell, New Mexico incident in 1947. People reported haunting sightings of the large ships being manned by human-like figures.

Rather than the strange ships being the product of alien design, the popular belief was that they were created by a secretive inventor genius. Thomas Edison was credited for creating them so often that he had to release a public statement denying his involvement.

Though historians think the sightings were probably just the product of dirigible test flights, American newspapers published stories written to add fabricated mystique and drama to the events, as they were known to do at the time.

Editors of these newspapers thought that the public knew their stories were essentially fake and saw them as entertainment, but many readers believed the stories.