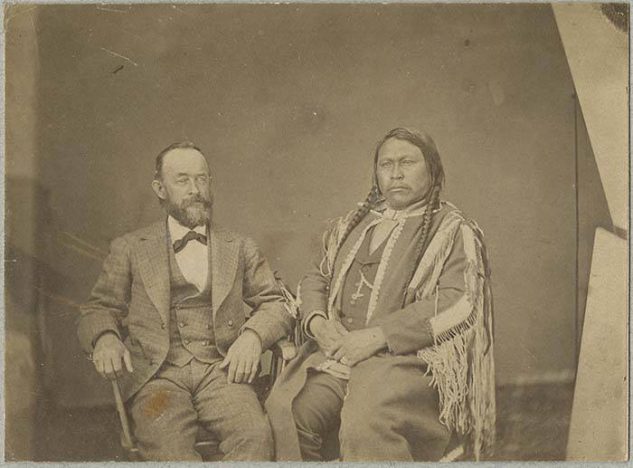 Chief Ouray was one of the Ute people’s greatest leaders. He was the leader of the Tabeguache (Uncompahgre) band of Ute people in Colorado and consistently supported peace between white settlers and Native tribes.

The Ute people, or Nuuche, are Colorado’s longest standing residents. Before white settlers and Europeans traversed the western part of the United States and made the western landscape their home, the Ute Indians roamed expansive areas of New Mexico, Wyoming, Nevada, Utah, Arizona, and Colorado.

Though he would come to make his home in Colorado, Ouray (meaning “Arrow” in the Ute language), was born in Abiquiú, New Mexico in 1833. Legend has it he was born during a meteor shower. Ouray’s mother was a part of the Tabeguache band of Ute people and his father was Jicarilla Apache.

Ouray spent his childhood in New Mexico and spent some of his youth as an indentured servant to landowners in Taos. As a young adult, Ouray, who was fluent in Apache, garnered other language skills including the ability to speak Spanish, Ute, and a bit of English.

In 1851, Ouray relocated to Colorado. His father, despite being born Jicarilla Apache, had apparently become the leader of the Tabeguache Ute people in Colorado and Ouray moved to live with his father and his people.

In 1859, Ouray married his second wife, Chipeta. Together, they would come to be known on a national scale and leave a legacy as two incredibly important figures in Native American history.

Chipeta was significantly younger than Ouray — there was about a ten year age difference between the newlyweds. Little is known about Chipeta’s early life and her story is complex with competing narratives. It is difficult to separate fact from fiction, but the existing oral history narrative states that Chipeta was Apache by birth and adopted by the Ute people. 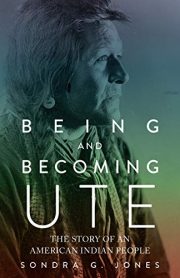 Being and Becoming Ute: The Story of an American Indian People

“Jones’ balanced, highly detailed historical ethnography should be in every school library, in every county library, and on the shelves of any readers who are interested in histories of indigenous peoples of North America. Her book is a major contribution.”
– Lawrence Hazelrigg, Amazon review

After moving to Colorado, Ouray married his first wife, Black Mare (named Black Water in some sources). Shortly after their marriage, the couple had a son, Pahlone (Paron). Sadly, Black Mare passed away suddenly not long after the birth of her son.

According to oral tradition, when Chipeta was very young, she was the only survivor of an attack on her tribe. Neighboring Ute people found her and adopted her into their tribe. Some historians claim that Ouray’s first wife, Black Mare, was actually Chipeta’s sister. The validity to this statement is unclear, given the oral history of Chipeta being the only survivor of her camp.

Regardless, it seems most, if not all, historians agree that Chipeta was chosen to care for Ouray and Black Mare’s son after Black Mare’s untimely death, and it was her care for the young child that drew Ouray and Chipeta together.

Around 1862, Ouray’s son was kidnapped and the circumstances surrounding the rest of his life are unknown. After their marriage, the couple became known as the Ute peacemakers and Ouray was referred to as “the white man’s friend.”

Ouray and the U.S. Government

In 1863, Ouray began a relationship with the U.S. government that would last through the rest of his life. That year, as one of the few Ute leaders that agreed to be a representative at a meeting in the San Luis Valley of Colorado, he signed a treaty that renounced all parcels of Ute territory that were east of the Continental Divide.

In 1868, Ouray traveled to Washington, D.C. to negotiate another treaty.

This agreement displaced the Utes from the San Luis Valley and established a reservation for all Colorado Ute people who had been removed from their land. It was during these negotiations that the U.S. government named Ouray the chief of all Ute Indians.

The declaration by the United States of Ouray as chief of all Utes was troubling for the Ute people, as Ouray was only the leader of one band.

This designation would cause trouble for Ouray with his own people for the rest of his life.

Ouray was put in an impossible position, and he and Chipeta did their best to maintain peace between the various tribes of Ute people and the U.S. government.

Often, Chipeta would travel with Ouray to Washington, D.C. Chipeta, like her husband, supported peace and she was the only woman of her time afforded the opportunity to sit on Ute tribal councils.

Ouray’s Reputation Among the Utes

Ouray was not the most popular amongst the Ute people due to his continual willingness to cede lands to the U.S. government. Attempts were made on his life numerous times, including in 1875 when he was shot. Though her husband was not always welcome, Chipeta was always held in high regard by the Ute people and the respect the Utes held for Chipeta greatly helped Ouray.

In 1871, the US government no longer recognized sovereignty of Indian tribes. By 1873, an agreement was in place that provided a $1,000 annual stipend for Chipeta and Ouray, as well as a parcel of land near modern day Montrose, Colorado.

In 1879, a tragic series of events and conflict between white settlers and the Ute people came to an unfortunate end, known as the Meeker Massacre or Meeker Incident. Nathan Meeker, an appointed Indian agent, was killed by Ute people. His family was taken captive, as were about 10 other people.

The Meeker Incident was a complicated situation and the result of Nathan Meeker having little to no understanding of the Ute people. Meeker attempted to change their way of life and threatened them — whether unintentionally or intentionally — by calling in federal troops. Historians largely believe it was Meeker’s attitude toward the Utes and their way of life that caused the resulting violence.

After the Ute people retaliated and killed Meeker, Ouray did his best to temper any retaliation from the government and frightened white Coloradans. In the end, the U.S. government ordered Ouray to send 12 men to Washington to face sentencing for the murder. The men were acquitted but the U.S. government decided to take a stand against the Utes and remove them from their land once again.

In 1880, Ouray and Chipeta traveled to Washington, D.C. Unfortunately, all of their negotiations were for naught and they would soon be forced to relocate to a reservation in Utah named the Ouray Reservation.

At this point in his life, Ouray was in poor health. He made one last attempt for a peace agreement to retain his lands. He met with a Southern Ute leader in the hopes of gaining his aid in promoting the collection of signatures for a new peace treaty.

While on the Southern Ute reservation, Ouray grew increasingly ill until he passed away on August 24, 1880. His wife, Chipeta, lived for another thirty-four years. She relocated to the reservation in Utah and lived in poverty for the rest of her life.

The land where Ouray and Chipeta once lived near Montrose, Colorado, on the traditional Uncompahgre Ute lands, is now the Ute Indian Museum, which opened in 1956. After Chipeta passed away, she was originally buried on the Utah reservation her people had been forced to after Ouray’s death.

In 1925, Chipeta’s remains were exhumed and moved to the land in Montrose. In 1926, an obelisk commemorating the life of Chief Ouray was constructed on the site. The Ute Indian Museum in Montrose, Colorado is a unique place that showcases the rich history of the Ute people.

The Legacy of Chief Ouray

Ouray’s legacy, like many others of his time, is complicated. According to some historians and Ute people, Ouray was the one to blame for the Ute people losing their lands in Colorado. Others believe Ouray was acting in everyone’s best interest and doing his utmost to keep the peace the best he knew how.

Regardless, Chief Ouray is remembered today as a promoter of peace, a deft representative, and a powerful leader who navigated treacherous, violent times with grace and dignity.

Today, visitors to the Ute Indian Museum can delve deep into the lives of Chief Ouray and his people.

The Ute Indian Museum is owned and operated by History Colorado, which works closely with representatives of the Southern Ute Tribe, Ute Mountain Ute Tribe, and the Ute Indian Tribe of Uintah and Ouray Reservation in Utah to develop the museum’s content.

Read more about Native American leaders and places of the West: