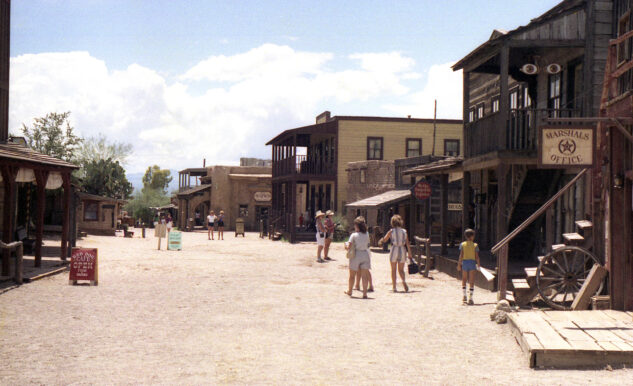 Tombstone’s epic cast, iconic one-liners and old school showdowns make it one of the best Western movies ever, but its filming locations brought the legendary tale to life.

But the success of Tombstone begins and ends with scriptwriter Kevin Jarre’s attention to detail and adherence to what life really looked like in 1880s Arizona. A believable background, while not always noticeable, makes the rest of the sometimes unbelievable storyline focused and credible. It’s the perfect backdrop to the West’s most infamous gunfight.

Here are 6 of the movie’s filming locations that give Tombstone that authentic HELL’S COMIN’ WITH ME vibe we know and love today.

Most of the action in Tombstone was shot in Mescal, a movie set some 45 miles east of Tucson and north of the real Tombstone. Because Tombstone itself was modern and touristy by the 1990s, it didn’t work as a practical film set, but Mescal was the perfect spot to build (and rebuild) an 1880s-era boomtown.

According to John Farkis’s The Making of Tombstone: Behind the Scenes of the Classic Modern Western, the Tombstone crew built or updated more than 80 structures in Mescal before filming began. They wanted the town to look old, of course, but they also wanted to remind audiences that Tombstone, in the classic ebb and flow of boomtowns, was still an up-and-coming community.

When you see half-framed buildings in the background, or tents and other temporary structures still being built, that’s all to show that Tombstone was still experiencing growing pains in 1881, when the gunfight at the O.K. Corral occurred.

The construction budget for the movie reached nearly $1 million, but the payoff is a legit Old West town that fits the times. The Oriental Saloon, Can Can Restaurant, C. S. Fly’s boarding house and photography studio, and the Grand Hotel were all reproduced in Mescal.

Mescal’s most memorable scenes include the lawmen’s legendary walk to the lot near the O.K. Corral. The crew reproduced Allen Street in Mescal, and though it appears to be a long walk in the movie, it’s mostly how the camera is angled that makes the stroll seem so extended.

Mescal is also where the Earps caravan into Tombstone for the first time, passing the Boot Hill graveyard that was made to mimic the town’s real cemetery. Many of the street scenes in the movie are filmed in Mescal, and after a few viewings you can get an idea of which shots are in Mescal and which are in Old Tucson Studios.

That’s when you really become a Tombstone fan.

Today, Mescal is in the middle of a renovation that will once again make it a premier Western filming location — thanks in part to Arizona’ recent filming tax credit law.

Guests can also tour the town, and Mescal puts on seasonal events like Cowboy Christmas, which sounds like a Hallmark Channel movie I’d pretend to not be interested in, but once it starts, I sit down just to watch for a few minutes, then get sucked into watching the whole thing. That’s how these things go.

Old Tucson Studios is exactly what it sounds like: an Old West movie studio set up just west of Tucson proper. When Tombstone began filming, Old Tucson Studios owned Mescal, so it was a nice package deal to be able to shoot in both locations.

While most of the outdoor action happened in Mescal, Old Tucson Studios was home to several key scenes, including the Mexican wedding massacre, shot in front of the mission, where the Cowboys set the brutal tone early.

The optimistic arrival of the Earps in Tucson also took place at Old Tucson Studios. There wasn’t much train track available — try 1,000 feet or so — but the camera crew worked their magic and made the train depot arrival look legit.

A large soundstage was used to film scenes in the Bird Cage Theater and the Denver theater Josephine Marcus performs in at the end of the movie. The snowy scene outside the theater is also filmed at Old Tucson Studios, despite the scene being filmed in the heat of summer.

“Most background players were used for general, nondescript activity and even though it was way over 90°, many females were dressed in capes and gowns as if it were cold,” wrote Farkis in The Making of Tombstone. Sounds like a blast.

Finally, when a drunken Johnny Ringo calls out the Earps and Doc Holliday responds with “I’m your huckleberry,” this all happens on Kansas Street in Old Tucson Studios.

Like Mescal, Old Tucson Studios is attempting a comeback — a 1995 fire destroyed much of the property, much like what occurred in the real Tombstone — and today they host events like Yuletide at Old Tucson, which sounds like another Hallmark Channel movie, albeit one made for grandparents.

South of Tucson and north of the Mexican border lies Babacomari Ranch, a 28,000-acre swath of land that has just about everything: grass, desert, creek, towering trees and wide open Sonoran views.

It was the perfect place to film Tombstone’s outdoor scenes, many of which involved Cowboy “extras” doin’ all kinds of cowboy stuff: shooting, riding horses, hollering, you name it.

This is where the extras — called “buckaroos” — camped out during filming, and it helped them get further into character. Many of the original Cowboy scenes shot at the ranch were eventually cut by incoming director George P. Cosmatos, who replaced scriptwriter and inexperienced director Kevin Jarre.

Henry Hooker’s ranch house scenes were shot at the ranch, as is the final showdown between Ringo and Doc Holliday, filmed in a splendid grove of trees that looks like a great place to die in a duel, if that’s how you have to go out.

If you’re interested in visiting the ranch, they’re all about it: the family runs a vacation rental on the property, and weddings and events are also an option.

In real life, Wyatt Earp and his crew came upon Curly Bill and some other Cowboys in March 1882 at Iron Springs, some five months after the O.K. Corral shootout.

Another shootout took place here, and Wyatt allegedly killed Curly Bill, though there were rumors Bill lived or wasn’t there at all. In any case, Tombstone includes the vengeance killing scene, which was shot in Sabino Canyon, part of the Coronado National Forest northeast of Tucson.

The Sabino Canyon scenes were shot at different times throughout the summer, so sometimes the creek was dry and other times it flowed heavy after a monsoon storm. Because of changes in the sky and creek, the crew had to adjust the scene accordingly.

After filming the main Iron Springs scene, for example, production “went back to Mescal, built a small wooden platform and as Russell shouted, ‘No!’ and fired his shotgun about two dozen times, they filmed him with the sky as a backdrop,” wrote Farkis. “That cut lasted less than two seconds but it showed Earp’s determination.”

You can’t have your main character be a straight up badass all the time: they occasionally need to court a romantic interest while each rides a horse at high speeds down what appears to be a possibly unsafe mountainside.

Tombstone nailed it, and they filmed that particularly light scene on Mount Lemmon just north of Tucson. It’s a refreshing contrast to the spare desert scenes throughout the movie, and one that shows Arizona’s range of geographical features that makes it so appealing to humans and animals alike.

Mount Lemmon is a dope year-round outdoor destination, with great hiking in the warmer months and skiing in the winter. It’s also great for horseback riding, apparently.

The drive up the mountain is known as Mt. Lemmon Scenic Byway, and it’s one of the prettiest scenic drives in the Southwest, with plenty of places to stop and take in the views as you climb up past 9,000 feet.

It was the perfect place to set the opening tone for the movie and show how gang-y the Cowboy gang could be (in real life, they operated pretty loosely and weren’t one coherent band of outlaws).

In The Making of Tombstone, the actors and producers pointed out that the weather and on-scene elements were as real as what you see in the film. Actor Larry Zeug said the Cowboys “started that gallop from a mile out … and they would focus in as we got closer. We could see lightning strike the ground while we were out there and it was pretty scary.”

Although Douglas Dry Lake only briefly appears in the film, it’s the perfect example of how production took the time to capture legit Old West locales that would build the film’s believability.

Cue up Netflix, pop some popcorn, and lean back the recliner: it’s time to binge some of the…