10 Wild West Facts of Everyday Life on the Frontier 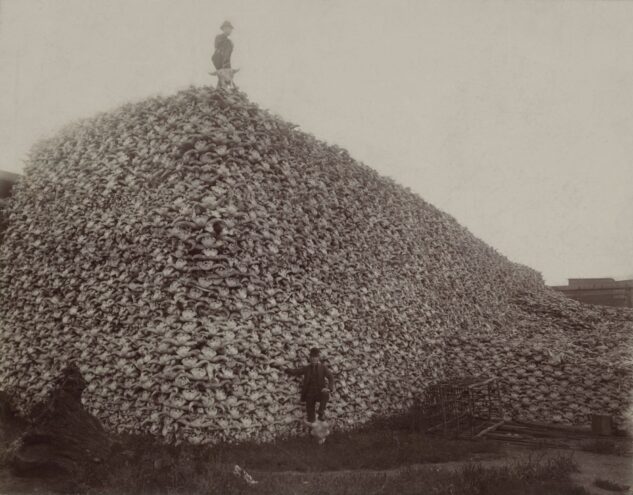 A pile of buffalo skulls in 1892. Photo credit: Wikimedia Commons

You may have watched every episode of Bonanza, died of dysentery playing Oregon Trail, and read all the best Louis L’Amour novels — and, of course, devoured all the stories on Oldwest.org (shameful plug) — but do you really know life in the Old West?

If you’ve done all that, you probably know more about the West than the average American does. Kudos. But many aspects of life on the western frontier, however, didn’t make it into pop culture, and they’ve been replaced by inaccurate myths or nearly forgotten altogether.

Here are 10 fascinating facts about life in the Wild West that are often overlooked by history movies and books.

1. Swinging saloon doors were real — not a Hollywood invention.

In every saloon scene in every Western movie ever made, you’ll see the iconic swinging saloon doors. That’s how bad guys get thrown into the street. It might be easy to think of this as a Hollywood invention, but these batwing-style doors were actually in popular use during the Old West.

Here’s why: saloons were much smaller than you would think, about the size of an average bedroom. We’re talking your kid’s room — not the master suite.

With no air conditioning or ventilation, the saloons got hot and smoky really quick. Batwing-style doors offered a little, tiny bit of privacy while letting plenty of fresh air in and stale, smoky, body-odor stench filled air out. They were also open enough to let music and laughter drift out the door. Saloon owners hoped the sounds of merriment would entice passers-by to stop in.

Because parts of the West had a high crime rate, saloons were equipped with a double-door system — swinging doors during operating hours and solid, floor-to-ceiling doors with stout locks to keep the whiskey safe when the saloon was closed.

2. Speaking of whiskey: it was God-awful.

If you bellied up to the bar in the Old West and expected the bartender to pour you a glass of smooth Kentucky whiskey, you’d be sorely disappointed by the terrible swill you got instead.

There were not a lot of laws regarding the content of alcoholic beverages back in those days and, let’s be honest, no one would have obeyed them if there were. What saloons owners sold as “whiskey” was often some concoction of actual whiskey mixed with creek water, distilled molasses, grain alcohol, cider vinegar, fruit juice, axle grease, and lord knows what else.

No wonder Old West whiskey had nicknames like “tangle-leg,” “coffin varnish,” “chain lightning,” “cactus poison,” “mountain howitzer,” and more. It wasn’t until 1897 that the Bottle-in-Bond Act was passed, guaranteeing the contents and quality of whiskey. The Food and Drug Act of 1906 put further regulations on whiskey and other food and drinks. Boring!

Fans of the 1980s computer game “Oregon Trail” will tell you that most pioneers in the Old West died of dysentery or rattlesnake bites.

The leading cause of death for folks in the Old West was not dysentery, snake bites, shootouts with rival gunslingers, or attacks by Native Americans. Nope. It was cholera. Cholera is caused by waterborne bacteria that thrives in stagnant bodies of water, like ponds, puddles, and slow-moving creeks.

Pioneers in the Old West didn’t have fancy water filtering straws that today’s hard-core hikers have, so when they got thirsty, they drank water from the closest available source.

Unfortunately, many of them slurped up the cholera bacteria along with H2O, and were hit with severe diarrhea, vomiting, and abdominal cramps. Within twelve hours to a few days, the person was dead, often from dehydration. The only treatment option available to them at the time was an opium-based painkiller that did nothing to actually treat the illness.

4. The Old West had an opioid problem.

Chinese laborers who came to California during the Gold Rush and to seek jobs building the Transcontinental Railroad brought their opium smoking with them.

For the first time, opium — which had long been an ingredient in medicine — was used as a recreational drug. The Chinese immigrants passed the opium pipe to the Americans they worked with, and starting around 1870, opium use boomed in the Old West.

It wasn’t just gamblers and prostitutes that enjoyed the opium pipe either. It was average farmers and ranchers — and their wives. Here’s a twist. Many of the estimated 250,000 opium addicts in the late 1890s vocally supported the temperance movement.

Alcohol, they declared, was so evil and destructive it should be banned, but opium, well, there’s nothing to see here.

5. The West was ripe with price-gouging.

When gold was discovered in California, it set off a massive migration of people who headed to the West hoping to get rich quick.

They soon realized that the only ones who were really getting rich during the Gold Rush were the price-gouging merchants who took advantage of the situation — and the lack of government oversight.

The cost of items sold at the Gold Rush camps were mind-bogglingly high and makes our current inflation problem seem trivial. A dozen eggs, for example, cost about $3 in 1851 — comparable to a dozen eggs today — but when you adjust the 1851 price to today’s equivalent, that carton of eggs would be $105.

Merchants also charged $20 for a pound of butter — more than $700 today. That is one expensive ass breakfast.

6. Breakfast on the trail was grueling work.

Speaking of: breakfast on the road meant something entirely different for westward pioneers than for people today. It certainly wasn’t Starbucks and a bagel.

Traveling in a wagon train required waking up at about 4 o’clock in the morning to prepare breakfast, break camp, saddle up the horses, and round up the cattle. Coffee and bacon were staples.

The womenfolk (insert eye roll about gender roles here) stirred up the fire so they could roast green coffee beans in a skillet. The roasted beans were put through a coffee grinder then brewed with water over the open fire. And I complain that my Keurig takes too long.

Slabs of bacon were tossed in the skillet and fried up. On a good day, you might also get some cornmeal gruel. Bacon wasn’t just morning candy: it was such a mainstay, pioneers ate it two or three times a day. Well-smoked and cured bacon could, in theory, last the whole journey. I’m skeptical.

Related read: Daily Life on the Oregon Trail: What it Was Really Like

Know what the Great Plains didn’t have? Trees.

Know what the Great Plains had a lot of? Buffalo poop.

Since trees are a rarity in the prairies of the Great Plains, folks had to get creative with ways to fuel their camp fires, so they turned to dried buffalo dung. Seriously.

As gross and unsanitary as that seems, it got the job done. When burned, the “meadow pies,” as they were called, produced a quick, hot, and — shockingly — odorless fire, perfect for cooking that bacon.

The “prairie chips” (another catchy euphemism) were plentiful and easy to pick up. The secret was to look for ones that had dried out in the hot sun, and not the juicy, steamy fresh one.

8. The Army declared war on buffalo.

The United States Army declared war on buffalo in the 1830s. They commissioned people to go west and slaughter as many buffalo as they could and encouraged settlers in the West to do the same.

What did the buffalo do to bring the wrath of Uncle Sam down on them? Nothing, except for being a delicious major food source for Native Americans.

Hollywood movies would have us think that folks in the Old West ran around with their guns half-cocked, ready to bite the bullet and jump in lock, stock, and barrel with guns a-blazing whenever they dodged a bullet (okay, that’s enough of the gun phrases).

The reality is that most Old West towns had super strict gun laws, even notorious boom towns like Deadwood, Dodge City and Tombstone. It was illegal to carry a gun within the city limits of these towns and others.

Anyone coming into town was required to stop at the sheriff’s office and check in their guns before settling in. It was the Old West version of a coat check, except America doesn’t have a coat control problem. Go figure.

10. Requirements for sheriffs were pretty loose.

In the Old West, as it is today, sheriff was an elected position — and not a particularly appealing one.

The pay was paltry, if there was one at all. Sometimes a sheriff only received a percentage of the fines he imposed on people, or taxes collected from locals. Does anyone else think a system like this is just inviting corruption?

Each state or territory had their own requirements for sheriff, and none of them had anything to do with experience, education, or background checks. Most places only required that a man be 21 years old or older and a U.S. citizen.

And no one really checked on that last part.

Some states had no requirements at all. Take Texas, for example. The 1876 Texas Constitution only noted that sheriffs were to serve two-year terms. Nothing at all was mentioned about age, citizenship, gender, race, or previous criminal record.

That’s how Moses Burton, an African American, was elected sheriff of Fort Bend County in 1869, a year before the 15th Amendment granted African Americans the right to vote. Burton was the country’s first black sheriff.

According to legend, one sip of the 50-proof whiskey made from rich New Mexico wheat was all it took to make one think he had been struck by lightning.