Women of the Wild West 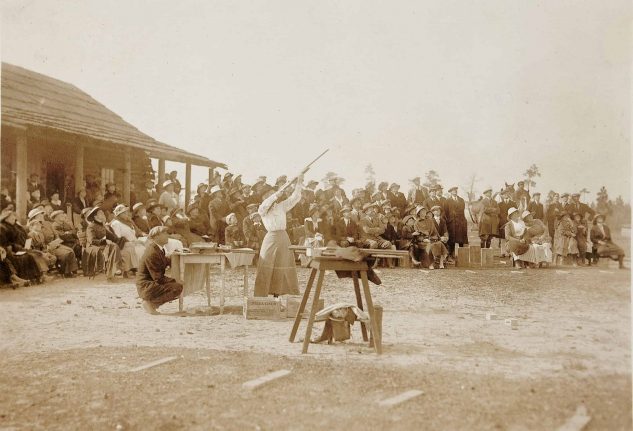 There is not one singular definition of a Wild West woman: the history of the pioneer American West is profuse with myths and legends of the frontier’s infamous women.

One of the groups that traditionally has been highly mythicized are women in the West. Women throughout history tend to be depicted as characters rather than multi-dimensional human beings.

Stories of women like Countess Katrina Murat — who supposedly sewed gold dust into her bloomers, and then needed help to be lifted into her wagon because the dust weighed her down — are common, and it’s difficult to discern what is fact and what is fiction in the history of the American West.

Women’s Roles in the Wild West

While in the early days of the Wild West, it was indeed a rugged terrain rather without traditional refinement, the gold rush brought large influxes of settlers who quickly developed areas of the pioneer country into cultural epicenters.

Women, writes Lary May, were “the exclusive bearers of aesthetic taste and refinement …destined to be the agent[s] of culture and moral perfection” at that time really altered the western landscape.

During the late nineteenth century — when the white settlement of the American West was occurring — it was a transitional time for women in American society. As views on gender began to develop over the course of the 19th century, and Victorian culture came and went, women began defining their power entering the public domain, both socially and in the workforce. 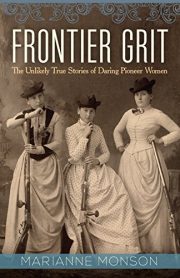 “I love this writer’s ability to showcase individual stories about different time periods. The researched information is not dry but becomes personal and warm portrayals of the strength and dedication of pioneer women.”
– Amazon review

Across the country, women were transitioning more from the private into the public sphere and this was especially apparent in the West, where women needed to play more integral parts of settlement development and take on roles traditionally reserved for men. Perhaps many settlers saw the white settlement of the West as a way to almost start over socially and change pre-existing common social mores.

There was a sense of independence amongst women in the early west. Lena Stoiber (who was known as the “Bonanza Queen” of Silverton, Colorado) took on the role of mine boss and managed the miners who worked in the Silver Lake mine that she and her husband owned. She was known for her tough management policies and her miners referred to her as “Captain Jack” or “Jack Pants.”

Entrepreneurial Women of the West

The West was full of entrepreneurial women who made their mark on the frontier. Mary Hauck Elitch Long was the first woman in the world to own and operate a zoo, located at Elitch Gardens in Denver, Colorado.

She and her husband opened the zoo, the first west of Chicago, in 1890 and upon his death in 1891 she took over. During a time when women held barely any business or political power, she was able to launch herself to success as the “First Lady of Fun” and famed “Lady of the Gardens.”

The West was not just a place for white women to make their mark on American history. Justina Ford was a pioneer in the field of medicine and became the first licensed African American female doctor in Denver, Colorado.

She broke not only gender norms but race barriers during her time. Historians estimate Ford delivered over 7,000 babies during her tenured 50-year career in medicine in Denver.

Influential Women of the West

Mary Fields, better known as “Stagecoach Mary,” was a force to be reckoned with: a pioneer who made a name for herself as the first African American woman to receive employment as a U.S. postal service star-route mail carrier.

Fields was born into slavery and was freed at the end of the Civil War. She eventually made her way out west to Montana where she worked for St. Peter’s Mission. She received her mail service contract in 1895 and held her contract for 8 years.

Chipeta, the wife of Ute leader Chief Ouray, was an influential force in the West and played an integral role (along with her husband) in maintaining peace between the various tribes of Ute people and the US government.

She always supported peace and she was the only woman of her time afforded the opportunity to sit on Ute tribal councils. Today, Chipeta’s former home is the site of the Ute Indian Museum in Montrose, Colorado.

Like Chipeta, Owl Woman (Mistanta) was also known as a peacekeeper between Native Americans and white settlers in the West. Owl Woman was the oldest daughter of the Southern Cheyenne tribal leader White Thunder and the wife of white trader William Bent, the founder of Bent’s Fort.

Owl Woman served as an interpreter, mediator, healer, and played an important role in establishing peace between white settlers and Native Americans during her time.

Women’s Clubs in the West

The women’s club movement was popular in the West, and women who traveled west desired to foster interest in arts, scholarship, and patriotic endeavors that they may have previously been involved with when they lived back east.

Women’s clubs like the fortnightly club, artist’s clubs and others were established in Western cities and helped push forward cultural society. Though culture was being propelled forward by women in the West cities, many eastern cities still looked at the west as destitute of refined civilization.

In 1910, Denver, Colorado society leader Louise Sneed Hill discussed the common misconceptions of the western landscape. In her article “East vs. West,” published in Harper’s Bazaar, she tackled many of the commonly held myths about the west.

She stated that her piece on social Denver was an “impossible subject” to the minds of Bazaar readers as she felt to them “no such place exists.”

She wrote that so many individuals still looked at Denver as the “Wild West” where people lived “in the most primitive way” with “stray Indians walking about” and the “occasional herd of buffalo roaming through our streets.”

Contrary to popular belief, Denver, she wrote, was actually a “civilized cosmopolitan city” that laid “proudly in the dazzling sunshine beneath the deep blue Colorado sky.”

Women’s Rights in the West

The West also became a place where women found a more equal playing field with their male counterparts. Wyoming was the first state to enact women’s suffrage. The people of Wyoming were motivated by multiple factors to pass legislation on women’s suffrage.

While some Wyoming legislators like Edward M. Lee and William H. Bright (the man who introduced the bill) felt denying women the vote was a “gross injustice” that should be corrected, supposedly many voted to approve women’s suffrage in order to gain free, national publicity for the territory and also to attract more single women to the area.

After the enfranchisement of women in December 1869, in 1870, Wyoming appointed their first female Justice of the Peace, the first woman to hold that position in the United States, Esther Hobart Morris. When Wyoming became a state in 1890, it was officially the first state to pass women’s suffrage.

There were certain circumstances in the west where females achieved equal pay as well. Famous western showman Buffalo Bill Cody paid the female performers in his Wild West Show the same as their male counterparts.

He said “if a woman can do the same work that a man can do and do it just as well, she should have the same pay.” Sharpshooters Annie Oakley and Calamity Jane were two women who participated in Cody’s show and received the equal pay he promised.

Working Women of the West

While many women participated in mainstream activities, a great deal of women worked in or owned houses of ill-repute. Many cities in the west boasted red light districts and the ladies of the night were frequently busy entertaining lonely prospectors, miners, and pioneers.

In Denver, Leah J. Wood, better known as Jennie Rogers, was “the queen of Denver’s underworld.” Jennie was said to be of “surpassing beauty in her younger days.”

She hailed from Pittsburg, where she initially worked in the markets. She married quite a few times, first to a doctor and later to a steamboat captain with the last name of Rogers. Captain Rogers had “charge of a boat between Pittsburgh and Cincinnati” called the “Jennie Rogers” which was on the river for “over a quarter of a century” and was still running as of 1909.

After a short stint working as the housekeeper for the mayor of Pittsburg, she aligned herself once again with another man, Jack Wood, a hack driver from Omaha. When Wood died, Rogers went to Chicago and “established a fashionable resort [that] bears her name.”

For years, Jennie was the queen of Denver’s red-light district. Jennie owned and operated the famous “House of Mirrors” on Market Street. According to historian Andrew Gulliford, Jennie and “her girls were classy business women who made quite a profit from their luring endeavors.”

Other ladies of the night weren’t as successful as Mattie Silks or Jennie Rogers. Mattie Blaylock, an Arizona prostitute and common law wife of Wyatt Earp, was a sex worker for the majority of her adult life and killed herself in her late 30s by overdosing on laudanum and alcohol. Blaylock’s was not the only tragic story of a young woman in the west.

The Boom-and-Bust Lifestyle of the West

Colorful figures from the pioneer West such as Elizabeth “Baby Doe” Tabor saw boom and bust kinds of lifestyles that ended in tragedy. Baby Doe’s story has become legendary. She rose from humble beginnings to become the “Silver Queen” of Colorado. She had an affair with the married “Silver King” of Colorado, Horace Tabor, and married him before he was able to obtain a legal divorce from his first wife, Augusta.

Baby Doe’s life was filled with rather scandalous activities for a woman of her time and she was well-known for defying and disregarding social norms. She led a lavish lifestyle until the silver crash of 1893, when she and Horace lost their fortune.

Horace passed away in 1899 and left his wife and two daughters penniless. The Tabor family tragedies extended to their daughters. The Tabors’ younger daughter, Silver Dollar, moved to Chicago, where she was murdered in 1925. Baby Doe spent the remainder of her life in a cabin on the property of their formerly prosperous mine, the Matchless. She froze to death in 1935.

The West was full of women who led incredible and fascinating lives. Unfortunately, so many women in history have been written out of the mainstream narrative, disregarded or misrepresented.

While women’s history is becoming increasingly more popular and we now know about the lives of many American women, there are still so many stories left to be discovered and told.

These “Wild West” women were trailblazers on the final frontier: entrepreneurs, pioneers, innovators, and change makers that shaped American history and greatly influenced the areas that encompass what we know today as the American West.

Learn more about other women and pioneers of the American frontier: