The Wives of Wyatt Earp, from Aurilla Sutherland to Sadie Marcus 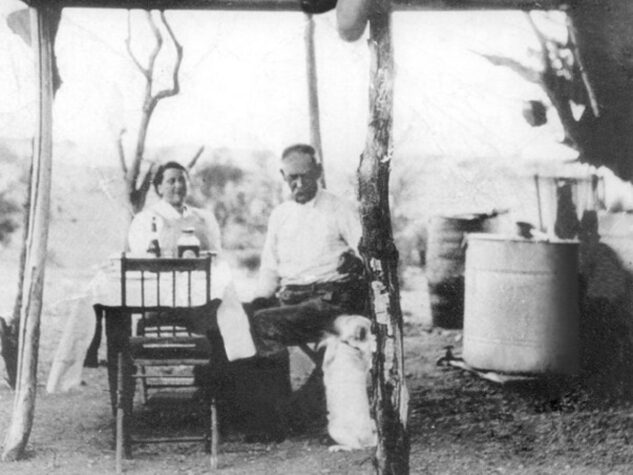 Wyatt Earp spent his Old West career walking the fine line between lawman and outlaw, so it should be no surprise that his love life was just as complex.

Tall and handsome with charming blue eyes and a mop of blond hair, Wyatt Earp was quite the looker. The ladies noticed him, and he certainly had a fondness for women.

Although Earp worked for a time as a pimp and brothel owner – and was arrested a few times during prostitution stings – he believed in the sanctity of marriage. Historians are unsure, however, if he believed in divorce.

What is also unclear is if each of Wyatt Earp’s four wives were attracted to him for his reputation as a tough, Old West lawman, or if they fell in love with him for his bad-boy, outlaw ways.

There is evidence to suggest that he truly loved each of his wives and was a loving and devoted husband … until he wasn’t.

Let’s look at the four women who, for a portion of their lives, called themselves Mrs. Wyatt Earp.

The tragic story of Aurilla (or Urilla) Sutherland, Wyatt Earp’s first wife, is one of ultimate despair. The Earp family moved around a lot and, in some cases, squatted on land they did not own.

At one point, when Wyatt Earp was in his late teens, he set out in his own direction, wandering from town to town in search of work. Eventually, he crossed paths again with his family who were now living in Lamar, Missouri. Earp decided to stay with his folks for a while.

At this time, Wyatt Earp, a young man in his early twenties, met a 19-year-old woman named Aurilla Sutherland. How the couple met is a mystery; however, they were both members of the Methodist church so they may have been introduced there.

The Sutherland family ran a hotel in Lamar that was just two doors away from a business owned by Wyatt Earp’s father, Nicholas, so the couple may have met that way. What we do know is that Wyatt Earp was head-over-heels for the lovely Aurilla Sutherland.

When Wyatt Earp and Aurilla Sutherland got married in early 1870, Earp spent $75 on a small house with a bit of land. Earp and his young bride hoped to live a simple life.

He took a job as the town constable of Lamar and the Earps settled into their new home. Soon after the wedding, Aurilla became pregnant. Wyatt Earp was thrilled and looked forward to family life. But it was not to be.

Well into her pregnancy, Aurilla Sutherland Earp fell ill. Some reports stated she contracted typhus. Others said it was cholera. Whatever the sickness was, it claimed her life and the life of her unborn child. It is equally likely that Aurilla simply died in childbirth, as was common in the 1800s. Wyatt Earp was devastated by her death.

To make matters worse, Aurilla’s brothers got into an altercation with Earp and his brother, Virgil. The Sutherland brothers accused Earp of seducing their sister and getting her pregnant, leading to her death. There is some evidence that the couple was truly in love, however.

Most historians point to the tragic death of Aurilla Sutherland Earp as the turning point that redirected Wyatt Earp from an honest lawman to a criminal outlaw. Unable to control his grief, Earp got in bar fights and brawls. He sold his house and left town.

Once again, he moved from place to place, but this time, his engaged in petty theft, pimping, and other criminal activities. When he was caught stealing horses, he managed to elude the gallows. Instead, he served time in jail. When he was released, he headed to Wichita and rarely spoke of Aurilla again. 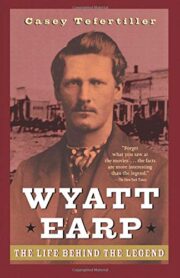 Wyatt Earp: The Life Behind the Legend

“The ‘Old WEST’ isn’t what the Hollywood movies depicted it to be. Their concept of history is filled with half truths and sheer fantasy. Casey’s excellent book is based on truthful history and isn’t the contrived dime novels of yesterday year.”

In Wichita, Wyatt Earp hoped to regain control of his life. He secured employment as a part-time officer of the law but moonlighted as a bouncer in a brothel. There, he met Sarah Haspel, who went by the nickname Sally. Although she was still a young teen, Sally worked as a prostitute in the brothel, which was owned by her mother.

Sally was soon smitten with the handsome lawman, and he admired her youthful charms. In no time at all, Sally Haspel became the second Mrs. Wyatt Earp in 1872. Sally and Wyatt’s marriage was one of convenience, and probably passionate lovemaking, but not actual love.

For the very young Sally, marriage to Earp was a way to escape her life of prostitution. For Earp, it was an opportunity for female companionship.

Sally accompanied Earp when he accepted the job of assistant marshal of Dodge City. No doubt she believed they would settle into a happy existence in their new home. But things took a twist that Sally never saw coming.

Enroute to Dodge City, Wyatt Earp met a woman named Celia Ann Blaylock, but was called Mattie. There was an instant connection. With Mattie, Earp felt a deep love he had not experienced with Sally. With Mattie in the picture, Earp needed to figure out what to do about Sally.

Rather than return Sally to her mother’s brothel in Wichita, Earp deposited Sally on his brother’s farm with the promise to return for her. Sally may have been young, but she wasn’t stupid.

She heard rumors that her husband had a new wife named Mattie – even though he never officially divorced her. She refused to fight another woman to get her man back. Instead, she found a new husband. The second Mrs. Wyatt Earp remarried, raised a family, and lived well into her nineties.

By most accounts, Celia Ann Blaylock was an innocent Iowa farmgirl when, in 1866, the then 16-year-old ran away from home with her sister. The girls were looking for adventure and excitement beyond farm life.

Celia Ann took the name Mattie Blaylock when she settled in Scott City, Kansas. There, she was forced to work as a prostitute to earn her living. She was on her way to Dodge City in 1873 when she had an encounter with a fellow traveler named Wyatt Earp.

He wanted her out of his life, so he abandoned her at his brother’s farm and moved in with Mattie Blaylock in Dodge City. For the first few years of their relationship, Mattie continued working as a prostitute even as her husband was a lawman.

Most historians believe that Wyatt Earp and Mattie Blaylock were not lawfully married, but had more of a common law marriage arrangement. Earp was, after all, still legally wed to Sally Haspel.

Still, Mattie took Earp’s last name and folks around Dodge City knew them as husband and wife. Mattie remained with Earp when, in 1879, he moved to Tombstone, Arizona, home of the O.K. Corral.

Over time, Mattie grew addicted to the laudanum and her health suffered. As her health declined, so did her relationship with Wyatt Earp. Earp began to stray, and he caught the attention of yet another woman, Josephine Marcus, otherwise known as Sadie.

Mattie Blaylock Earp was well aware of her husband’s infatuation with Sadie Marcus. In fact, Earp’s alleged affair with Sadie was the hot gossip of Tombstone at the time.

It was quite scandalous.

The rumors Mattie heard undoubtedly stung. Emotions boiled over and Mattie and Sadie engaged in a series of very public fights that only added to the scandal.

Following the gunfight at the O.K. Corral in 1882, when Wyatt Earp launched his vendetta ride, Mattie went to live with some relatives of the Earps in California. The plan, or so she thought, was for Earp to send for Mattie when things settled down, but a telegram from Earp never came.

On July 3, 1888, Mattie Blaylock, the third Mrs. Wyatt Earp, took a lethal dose of laudanum, washed down with alcohol. The coroner ruled her death a suicide, but her supporters contend it was an accidental overdose.

Earp’s only Jewish spouse, Josephine “Sadie” Marcus was originally from the East Coast, but her family moved to San Francisco when she was a teen. She loved the excitement of the new and growing city.

She especially loved the acting troupes that frequented the theatres of San Francisco. Still in her teens, Sadie Marcus ran away from home to join one of these acting troupes. The performers toured around the west, playing to packed houses in California, New Mexico, and Arizona.

Sadie Marcus left the acting troupe during a stop in Tombstone and decided to stick around that town. She met a man named John Behan, the county sheriff and part-time horse thief often associated with the notorious Clanton Gang, including Ike Clanton.

The two became engaged. Sadie didn’t seem turned off by his criminal behavior, but she was upset with Behan’s philandering ways. She eventually called off the engagement.

Wyatt Earp took up with the beautiful, young Sadie, even as his drug-addicted wife, Mattie, lay in bed with crippling headaches. Mattie believed that her husband would soon grow tired of his new fling, but in reality, he was growing tired of her.

Earp’s vendetta after the Shootout at the O.K. Corral was just the excuse Earp needed to convince Mattie to leave town, freeing him to take Sadie Marcus as the fourth Mrs. Wyatt Earp.

Sadie and Wyatt Earp remained together for 46 years, from 1882 until Earp’s death in 1929. During that time, the couple lived in San Francisco, as well as a series of boomtowns across the Old West.

Eventually, they settled in Vidal, California, and purchased a cottage in the Sonoran Desert. The couple spent a lot of time in Los Angeles where they hobnobbed with celebrities and actors.

Wyatt Earp died on January 13, 1929, at the age of 81. Sadie Marcus Earp lived as a widow in LA until her death in 1944. She was the last Mrs. Wyatt Earp and the woman who held that title for much longer than her predecessors.

The four Mrs. Wyatt Earps each had a unique view of some of the key events of the Old West as the wives of a legendary lawman-turned-outlaw. Examining the love life of Wyatt Earp also gives us a new perspective of this man.

From what we know of the four Mrs. Wyatt Earps, we can conclude that Earp enjoyed the companionship of women but was ready to move on when he grew tired of one woman.