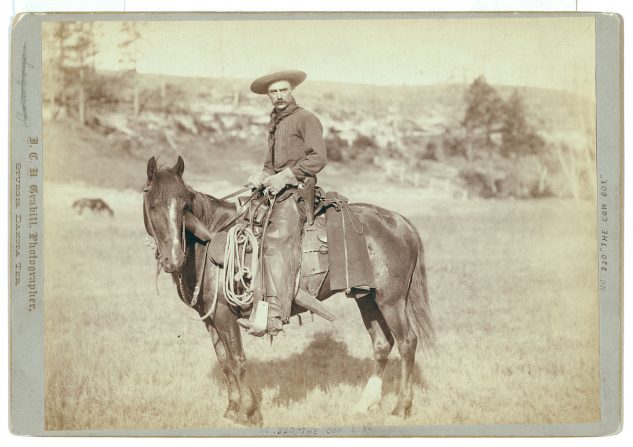 Member of a Sheriff's posse sent to quell the violence of the Pleasant Valley War. Source: Wikimedia Commons

It might not be the most well-known showdown, but the Pleasant Valley War was the most violent blood feud in the history of the Old West.

As the United States expanded West, feuds pockmarked the open range like a shotgun blast.

Settlers looked upon the range as a great opportunity to build up herds which brought ranchers immense profits. One might say that in this world of open land and lawless opportunities, cattle were often more prized than human blood.

Most notable were the frequent disputes between sheepmen and cattlemen who vied for control of the range for their herds.

Cattle versus sheep is a historical theme of the Old West. The common perception among cattlemen at the time was that sheep destroyed the range for cattle grazing. Although modern evidence has shown that cattle and sheep grazing together may be beneficial, the cattlemen didn’t see it that way.

Perhaps the most infamous range feud was the Pleasant Valley War. This conflict, sometimes called the Tonto Basin War, the Rim Country War, or the Tewksbury-Graham Feud, tore the Tonto Basin apart between 1882 and 1892.

There is no firm number of how many people were murdered in this feud, but Eduardo Obregón Pagán, in his Valley of the Guns, estimates that between 24 to 50 men were murdered, making it perhaps the bloodiest range war in American history.

While the details of this feud are murky, confusing, and often in conflict with each other, there are certain facts which help explain the truth behind the appalling bloodbath that was the Pleasant Valley War. 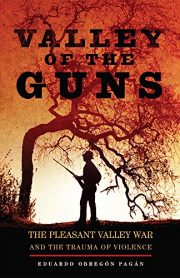 Valley of the Guns: The Pleasant Valley War and the Trauma of Violence

“Very readable, unbiased account of the Pleasant Valley War, and more importantly, how a community turns upon itself and spawns a blood feud.”
– Greg Roemke, Amazon review

1. The Tewksburys and the Grahams were originally friends.

The two antagonists in this feud, the Tewksbury and Graham families, were not always on shooting terms. The Tewksburys were led by the patriarch and widower James Dunning Tewksbury.

Tewksbury, originally from Boston, had married a Native American woman (possibly Shoshone), and they had four sons. One of the Tewksbury sons, Edwin, had made friends with the Graham brothers in 1882.

They hailed from Northern Ireland vis-à-vis Iowa and were scouting Arizona for ranching possibilities. Edwin encouraged them to settle in Pleasant Valley, Arizona, which they did in 1882. Both families worked for the same outfits herding cattle.

They also not only herded cattle, but rustled stock as well.

2. The feud started with a double cross.

John Stinson was a cattle rancher who wanted to build a bovine empire in Pleasant Valley.

The scheme was simple: Stinson branded his cattle with a letter “T.” The rustlers then rebranded over the “T” with a new brand, to which the Tewksburys and Grahams claimed ownership.

However, even as Stinson’s herd dwindled, John Graham registered the brand in his individual name. The Grahams, therefore, claimed the ownership of all the stock, thus double crossing their partners.

This incensed the Tewksburys, who then started applying their own brands to rustled cattle.  They even started rustling each other’s cattle.

3. The first death was due to pneumonia.

At about the same time as the double cross, one of Stinson’s foremen, John Gilliland, was investigating the dwindling herds and suspected both families of rustling Stinson’s property.

He ended up confronting both parties at the Tewksbury’s ranch in January 1883. In anger, Gilliland opened fire at Edwin Tewksbury but missed. Tewksbury then grabbed his rifle and shot back, injuring two of Gilliland’s companions.

Murder charges were filed by Gilliland, but the court dismissed them since no murder was had. In fact, the grand jury asserted that Gilliland instigated the fight in the first place.

However, on the way back from the court in Prescott, one of the Tewksbury brothers, Frank, contracted pneumonia and died. The Tewksbury’s blamed Gilliland and Stinson for Frank’s death.

Those who associated with Stinson, therefore, were no good.

4. The sheep versus cattle issue was only an escalation.

To make matters worse, Stinson at some point decided to use a divide-and-conquer scheme against the Tewksburys and the Grahams.

According to historian Don Dedera, in 1884 Stinson made an agreement with the Grahams to act as range detectives to locate rustlers. For the work, they were paid in head of cattle.  Stinson’s objective was to turn the Grahams against the Tewksburys.

The Grahams proceeded to again double cross their former friends and partners.

The Tewksburys escalated by doing the worst thing possible: they journeyed to Flagstaff, obtained sheep and let them loose on the range. By 1887 the tension in Pleasant Valley was about to erupt in violence and blood.

Pleasant Valley became divided by Cherry Creek, with the Grahams to the west and the Tewksburys to the east.

5. It wasn’t just the Grahams versus Tewksburys.

In February 1887, a Ute herder whom the Tewksburys had hired to look after their sheep was found murdered and decapitated.

The Tewksburys hired Native American trackers to find the culprit. They identified a horseman whose tracks led to the Graham ranch. This incident unleashed a confusing cascade of violent bushwacking and vendettas.

It wasn’t just Tewksburys versus Grahams: almost every person in the Valley was pulled in to pick a side.

Prominent on the Graham side, was the Blevins family, prominent for their shady rustling and violent activities. Also highly involved was the notorious Hashknife outfit of the Aztec Land and Cattle Company.

They sided with the Grahams since they were a cattle company and were looking to claim land to run their herds. The Tewksburys got in the way. In the process, the Hashknife terrorized the sheepmen through threats or actual violence, killing flocks.

As the feud grew, more people became involved, including the famous hired gun, Tom Horn.  While Horn proclaimed he never took sides, he was friends with the Tewksburys. The Tewksburys’ best gunfighter was Jim Roberts, who was alienated by the Grahams since they had been stealing his horses.

The feud was about to launch into its most violent phase. Ironically, by this point, Stinson had vacated Pleasant Valley, perhaps realizing he had unleashed a monster.

6. The first big bloodbath was because the Graham faction couldn’t get a free meal.

Interestingly, there were no Grahams present. Heavily armed, the party came to a ranch owned by the Wilson family. The Graham faction found that Jim and Ed Tewksbury were in the ranch house.

Not wanting it to erupt in violence, the party asked to be let in to have something to eat. A nasty exchange followed, before the Tewksburys inside opened fire. In the exchange, two of the Graham faction were killed immediately and two wounded.

Of the wounded, a man named Thomas Tucker escaped, crawling away to a nearby ranch where he was cared for. His wounds by that point were filled with blowflies.

Other murders by Tewksburys on the Grahams followed.

The Grahams were hell bent on revenge.

On September 1, 1887, they gathered a party and descended upon the Tewksbury ranch.  They caught John Tewksbury and his partner William Jacobs, whom they shot dead. It seems John Tewksbury may not have died instantly, since it was found that a rock was also used to bludgeon his brains out.

They then put the Tewksbury house under siege by sniper fire for several days. There is also an oft-repeated apocryphal story: when Eva Tewksbury tried to negotiate a truce so that they could go and bury the dead, the Grahams refused.

Eventually, wild pigs found the corpses and started feeding on them. Lore has it that Eva Tewksbury dared the bullets to bury the dead, but the besiegers held their fire while she dug.   The only part of this story that is reliably true is that the bodies were left abandoned for several days.

However, there was already plenty of Hollywood drama. Eventually John Meadows, who was both justice and coroner in the area, arrived from Payson to find the siege lifted. When the Tewksburys recovered the bodies there was not much left of them.

He and a storeowner buried the bodies. Meadows said:

They were badly torn by hogs and decomposition had gone so far that burying them was a most disagreeable task. All we did was to dig two very shallow graves and roll the swollen, mutilated bodies into them with our shovels.”

8. The most famous shootout of the feud was justified by an unrelated matter.

The most famous shootout from the feud occurred when Commodore Perry Owens, the Sheriff of Apache County, attempted to arrest Andy Blevins — alias Andy Cooper — who was one of the men who besieged the Tewksbury house.

In fact, Andy had bragged publicly that he had killed one of the Tewksburys. Owens, who was in Pleasant Valley, was likely urged by county officials to arrest Blevins. Meanwhile, Cooper had caught wind of Owens and holed himself up in a three room cottage with his relatives.

Owens cleaned his Winchester rifle and came to the house. Then, using a warrant for Blevins arrest on an unrelated matter of horse theft, he told Blevins to come out. Cooper slowly opened the door, but he was armed.

An intense shootout followed, in which Owens shot Cooper through the door and then killed two more — Mote Roberts and the teenage Samuel Houston Blevins, who had grabbed Cooper’s gun.

9. The Pleasant Valley War was truly to the last man standing.

The feud lingered on for another several years, even though it never reached the bloodshed of 1887.

Efforts were made by authorities to clamp down on the violence. But it never did quite stop, and in fact the authorities ended up killing more men to bring peace. Peace came, and by 1892, the only combatants who were left alive were Tom Graham and Edwin Tewksbury.

At this point, Tom, who was reportedly one of the Grahams who wanted to avoid bloodshed, left for Tempe, hoping to leave the memories of the blood feud behind. Edwin apparently had a different idea and caught Tom on the road hauling a load of grain. Edwin, and possibly an accomplice John Rhodes, allegedly shot him.

Edwin quickly returned to Tonto Basin to create an alibi.

Before he died, Tom identified Edwin and Rhodes as the shooters. This was also confirmed by multiple witnesses. He was put to trial and found guilty, but because of a technicality there was a retrial, and this time the jury found him innocent. The prosecution opted to drop the case.

Edwin Tewksbury was the last man standing in the Pleasant Valley War. He died of tuberculosis in 1904.

In 1879, a tragic series of events and conflict between white settlers and the Ute people came to…