17 Old West Insults, from Greenhorns to Bluebellies and Everything in Between 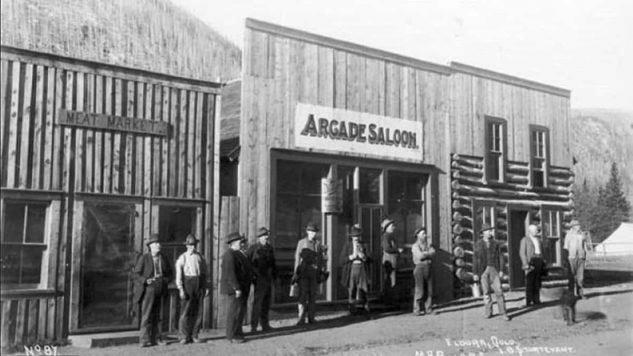 Folks in the Old West may have been rough, dirty, and trigger-happy, but that doesn’t mean they were always vulgar and crude.

In fact, many were God-fearing churchgoers that shied away from profanity. In fits of anger, frustration, or pain, however, people in the Old West could let loose a stream of colorful insults that would vent their wrath and sting their victim without making their own mothers blush.

Folks didn’t think too highly of someone if they referred to them as “above snakes.” That was a polite way of calling someone a low life.

On the scale of vilified critters, this person is only slightly above snakes. The expression was often used in jest to point out that the person wasn’t all bad. After all, he wasn’t quite as low as a snake.

2. Slow as Molasses in January

As a sweetener and flavoring, it was drizzled over pancakes, mixed into oatmeal, and baked into cakes. During the hot summer months, the molasses had a thinner, runnier consistency.

In the cold winter, however, the molasses got thicker and stiffer, making it challenging to pour it out of the jug. The molasses would eventually drip out, but it took forever. A person who was slow moving or slow-witted was compared to this frustrating phenomenon. They were as slow as molasses in January.

Northern soldiers wore blue uniforms even before the outbreak of the American Civil War. Bluebelly was a slang word for a Union soldier, but it evolved into an insult for a cocky person during and after the war.

That happened because Southerners hated the Union soldiers. They thought they were rude, pretentious, and condescending. So, when they encountered a person who was opinionated and pushy, or had a superiority complex, Southern folks likened him to a Union soldier and called him a “bluebelly.”

This insult from the time of the Old West is still used today. Then, as now, a bottom feeder is an opportunistic coward with few morals. They seek to profit from the misfortunes of others and are quick to swoop in to take advantage of a tragic situation for their own personal gain.

Some species of fish are bottom feeders. They don’t hunt for themselves. Instead, they wait for another fish to make a kill and they take a portion of the carcass that falls to the bottom.

An unflattering insult, to call someone grass-bellied was to call them fat.

But there was a bit more to it than that. The term originated in the Old West cattle ranches. Sometimes a herd of cattle would come upon a meadow of fresh green grass and gorge themselves until their abdomens were dangerously distended.

This was the cattle form of gluttony. When a person was so wealthy and greedy that he became fat around the midsection from eating large portions of rich food and doing little exercise, he was called grass-bellied.

“Interesting book on slang terms used among cowboys during the 1800s and later. Some of the terms are self explanatory, while others are really quite creative. Most of these terms have never found their way into the majority of Western novels or movies.”
– Arch Stanton, Amazon review

Adolescent male oxen or bulls, with immature horns that are just coming in, are often cocky, brash, and overconfident. They don’t yet know their own limitations. And, no, their horns were not green in color. They were just not ripe.

Newcomers to the Old West often behaved like young bulls. They were overzealous and under experienced, a combination that could get someone in trouble. These newbies reminded cattle ranchers of the cocky young bulls, so they applied the same nickname to them by calling them “greenhorns.”

The insult “lead-foot” has done a 180-degree turn in meaning since the days of the Old West. Today, when we say someone is lead-footed, it means that they drive too fast. But a lead-footed person in the Old West was one who moved too slowly and awkwardly. They moved like they had feet made of heavy lead.

Old West settlers borrowed this insult from the Spanish sometime in the 1840s. “Loco” translates to “crazy” or insane,” but it was used more generally as an insult for someone who acted impulsively or irrationally, despite the status of his mental health.

9. Mean Enough to Steal the Coins Off a Dead Man’s Eyes

Long ago, people put coins on the closed eyes of dead people.

This was done for two reasons. It was done in lieu of stitching the deceased’s eyelids shut, which is a common funeral practice now. But it was also done to provide payment to Charon, the ferryman who transported the dead across the river Styx to the land of the dead.

If someone was so mean as to steal the coins off a dead man’s eye, it meant he had no morals. First of all, stealing from a corpse is a pretty low thing to do, but it also meant, according to mythology, that the dead man’s soul couldn’t pay Charon for passage to the world of the dead. He would be doomed.

To be clear, there weren’t many people who actually stole coins off corpses, but it was such an inconceivably horrendous thing to do that the insult, “mean enough to steal the coins off a dead man’s eye,” came into being.

10. Not Fit to Shoot at When You Want to Unload and Clean Yer Gun

Folks in the Old West knew the importance of keeping their gun barrel clean. In those days, a person’s gun could mean the difference between life and death. Gun owners routinely unloaded and thoroughly cleaned their guns.

The quickest way to unload one’s gun at that time was to simply shoot at a target until all the bullets were spent. Yes, it is wasting bullets. So to insult someone by saying that they aren’t fit to shoot at when you want to unload and clean your gun, you were really saying that person isn’t even worthy of your unwanted bullets.

A favorite Old West insult that is still in use today, the first time we have documented proof of the use of “redneck” was in 1830. The meaning remains the same.

A redneck is a classless, backwoods hick, an uneducated dummy with a narrow view of the world. At first, a redneck was used as a derogatory term for a Scottish immigrant. During colonial times, men who came from Scotland often wore red neck scarves.

During the Old West period, the insult broadened. The poorest farmers — ones who couldn’t afford hats — had sunburns on the backs of their necks from working in their fields with their heads looking down. When they came into town, they were easy to spot. The poor, uneducated hick was the one with the red neck.

Just like the snakes they were named after, sidewinders were dangerous, slick, and evil. This insult was first documented in 1875 and was often used to describe con men and swindlers.

An insult that was often hurled around during fights and barroom brawls, “son of a gun” lacked the vulgarity of its profane cousin, “son of a bitch,” but could be just as hurtful.

The exact origin of the phrase is unclear, but some historians think the Americans borrowed it from the British. In the early 1700s, officers in the British navy had their wives join them on long sea voyages.

In the mid-1860s, gold and silver miners in the Old West referred to newcomers as “tenderfoots.” Unaccustomed to the grueling work of mines, the newly-arrived fortune seekers soon discovered that the rocks and stones at mine sites were painful to step on, even while wearing boots.

In time, however, the newcomers’ feet toughened up and the calluses protected them from the sharp stones. Until then, it was easy to pick out the newbies. Established miners, weary of all the newcomers, called them “tenderfoots.”

15. Ugly Enough to Back a Buzzard Off a Gut-Wagon

Near cattle ranchers and slaughterhouses, there was often a man whose job it was to drive a gut-wagon. The gut-wagon went from butcher to butcher, collecting the animal guts, bones, and other organic byproducts from the day’s butchering and meat processing.

This was the era before refrigeration, so the gut-wagon was, especially in the summer, a steaming pile of bloody, smelly carnage that attracted all sorts of scavengers. When the gut-wagon driver arrived at a stop and went inside to collect the inners, buzzards would descend on the wagon, fighting for their meals.

If a man or woman was particularly ugly, someone might insult them by saying they were so ugly that they scared the vultures away from the gut-wagon.

This may be another one of your grandma’s favorite insults.

A whippersnapper was a young upstart: an arrogant, sassy smart mouth. The origin of this iconic Old West insult stems back to 1660s England. A brash and conceited person was called a “snippersnapper.”

Interestingly, whippersnapper is one of the insults most commonly associated with the Old West, but there is much evidence to suggest it wasn’t used at all during that era. It was most likely a Hollywood invention. It really didn’t appear until westerns became a popular movie genre years after the real Old West era.

The color yellow has long symbolized cowardness. Beginning in the 1840s, the uniform of Mexican soldiers featured a wide yellow sash that draped over the belly. There was often tension between the Mexican soldiers and Texas settlers.

The soldiers were viewed as untrustworthy and treacherous, willing to betray friendships at a moment’s notice in order to save themselves. Texans insulted anyone who was a backstabber and coward by calling them “yellow-bellied.”