8 Wells Fargo Stagecoach History Facts You Might Not Know 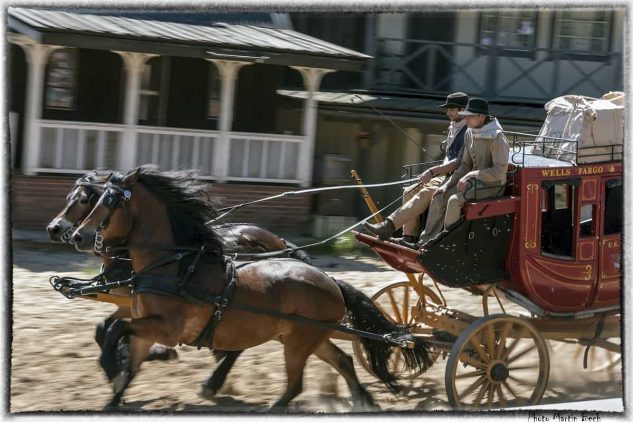 Wells Fargo’s express service helped to define and develop the Old West through stagecoaches and shotguns.

The discovery of gold in California in 1848 led to an onslaught of migration to America’s West Coast which was immortalized by the famous ’49ers. Businessmen like Henry Wells and William Fargo sensed opportunity, but the opportunity they saw was neither to be made with pick nor pan.

Their profits were to be made through ingenuity, stage coaches, and shotguns. Both men were partners who helped to found the American Express Company. However, while American Express is known for its credit card services today, in the 1850s it was chartered to operate freight lines east of the Mississippi River.

Wells and Fargo sensed the opportunities in the West and proposed to their board to expand American Express’s operations to the West Coast. The board declined, but allowed the two to set up their own venture.

Thus in 1852, the Wells Fargo Company was born, which would heavily impact the history and development of the Old West.

1. Wells Fargo was the Amazon of the Old West.

The Wells Fargo Company was established to provide delivery and banking services, specifically for new settlements in the West. In John Boessenecker’s profile of Wells Fargo, he remarked that any time “a new mining camp or cattle town sprang up, the company was there.”

The company set up its headquarters on Montgomery Street in San Francisco in July 1852. They immediately began to plan a network of express lines attached to local offices that webbed across the West. The company first concentrated on establishing ties to the other major settlements in California, including Sacramento, Marysville, and Stockton.

To expand, Wells Fargo bought out other transportation firms to obtain equipment and to gain greater market share of the logistic routes. They also fulfilled a great need for banking services in the West, starting with California, and supplied much needed capital to help develop the economy. In these affairs the company was quite successful.

The Western Historical Quarterly cites that by 1859, when the company established its first banking business in California, it had capital of $1 million. In some respects, Wells Fargo was an early proto-Amazon in the way it dominated its industries. 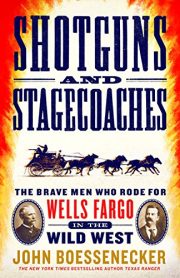 Shotguns and Stagecoaches: The Brave Men Who Rode for Wells Fargo in the Wild West

“This book tells the stories of the rugged and fearless men who rode the stagecoaches and rails, protecting the bounty that Wells Fargo hauled across the nation. I can only imagine the hours of meticulous research that went into this book.”
– Miss Vicky, Amazon review

Growing up in the heady era of the Gold Rush, Wells Fargo stages and ponies were obvious gold-haulers. Company stages fanned out to the various mining camps and collected large quantities of gold dust, which was hauled promptly back into the cities.

If a miner preferred to bring his own gold dust in, the company established agencies in the main towns where a prospector could exchange gold dust for gold bars or coins. The amount of gold that the company processed was staggering, which shows the scale of the gold being brought out of the West.

According to the Western Historical Quarterly, in March 1854 alone $2,618,404 worth of gold dust was brought into San Francisco. The next year, Wells Fargo became the leading company in gold shipments as its larger competition folded in the face of the Panic of 1855.  Apparently, people put trust in the new company which paid out depositors when the economy lurched south.

As Wells Fargo moved gold, it delivered to the prospectors something that may have been more important: letters and packages from its express line were sometimes the only link to people back home from a lonely mining camp.

3. Wells Fargo stages were a tempting target for robbers.

After the discovery of the Comstock Lode in 1859, silver became an important commodity for Wells Fargo. This specie is bulkier than gold, which led to the swift growth of the stage coach lines the company became synonymous with.

Generally speaking, Wells Fargo had a solid record of getting its cargo to its destination, so it was considered a reliable means of transport. What’s more, the company also insured shippers against losses, which further added to the desirability to use the company. However, there were problems which led Wells Fargo stagecoaches into becoming Old West icons.

Because of the nature of Wells Fargo’s cargo, it quickly became the object of interest of robbers and desperadoes. The first stagecoach robbery in the California gold country occurred in 1856.

This was the beginning of a long tradition of stagecoach robberies. Between 1870 and 1884, there were 347 attempted and actual stagecoach robberies. This led the company to send armed guards with their stages, a security force most well-known for wielding their double barrel shotguns. These guards were known as “shotgun messengers” but later parlance of “riding shotgun” has entered the modern lexicon.

4. Wells Fargo stagecoach robberies weren’t as dramatic as you might think.

A typically attempted or actual robbery of a Wells Fargo stagecoach would not play well in Hollywood today. Typically, highwaymen, who were dubbed “road agents,” would lie in wait on a steep grade.

Because of the slope, the driver of the stage left the wagon and was forced to walk it. The robber would then jump out and seize the reins while a second would cover them, issuing a command to hand over the box. It is in this way that between 1886 and 1892 Wells Fargo suffered 74 stage coach robberies in California.

However, the box usually could not be simply handed over: by the late 1860s, the company had learned to bolt its treasure boxes to the floors of the stage coaches. In one incident as related by the Western Historical Quarterly, in October 1866, a group of robbers stopped a stage and removed the passengers, including one woman they sat on a rock with a pillow.

They proceeded to blow open the box, which set the stage coach on fire. They then rifled through the passengers’ clothes for valuables, except for the woman forced to watch as a captive audience.

With Wells Fargo stages being the object of depredations, it’s no surprise that some of the shotgun messengers became veteran warriors.

One of the most famous is Mike Tovey, who from 1871 to 1893 worked the stage lines in multiple territories, from Montana to California. His most famous exploit occurred in 1880, in Nevada’s Sweetwater Mountains. At 3:00 a.m. on September 5 at the Sweetwater summit, serial stagecoach robbers Milton Sharp and William C. Jones planned to rob Tovey’s coach.

But Tovey had wind of prior holdups in the pass, and when he noticed footprints nearby, he decided to walk ahead of the stagecoach. The robbers tried to get the jump on Tovey, calling out of the dark and shooting warning bullets.

Tovey, feigning fear, retreated to the coach promising to deliver the box. After some more word play, Tovey let loose with his two barrel shotgun. In the ensuing fight, Tovey killed Jones, but he also took a bullet which shattered his right forearm.

Sharp fled into the night, and while Tovey was receiving help, Sharp returned to steal $750 from the strongbox. Tovey continued to ride for Wells Fargo for 13 years, sustaining other wounds until 1893, when a robber shot him in the heart.

Fifty-three expressmen died protecting their cargo between 1855 and 1915.

6. Wells Fargo had its own detectives.

It is little wonder that in light of the violence and robbery on the stagecoach trail, Wells Fargo had established its own detective division. In 1872, James B. Hume took the reins of the unit, and in doing so branded his name into Old West lore.

Hume had served as a marshal at Placerville, California and then was a sheriff in El Dorado County before signing on with Wells Fargo. While the company had used detectives since at least 1857, Hume set his own special stamp on it.

He first broke into prominence after the recapture of the notorious killer and stagecoach robber Charles Dorsey. In this case, Hume was responsible for the initial arrest and investigation. Dorsey’s arrest in particular made a scandal since he had used his ill-gotten gains to finagle his way into Indiana society.

He remained Wells Fargo’s chief detective until his death in 1904.

After the completion of the Transcontinental railroad in 1869, Wells Fargo shifted its strategy, choosing to send its treasure by train when it could. This was in many cases impractical since the railroad could not hope to reach every mining camp in the west. The trains were also susceptible to robbery.

The resilience of the company to get their shipments through by any means necessary is admirable. For example, during the winter of 1866 to 1867, the snow was so bad that trains could not pass through the Sierra Nevada, often considered one of the most difficult passes.

Instead, carriers using snow shoes went by foot, arranging rendezvouses in the heights south of Lake Tahoe in order to exchange packets and small packages. One veteran carrier, William Bennett, had a team pulling a sleigh hopelessly in high snow drifts.

After an hour of no progress and several horses freezing to death, he took the most valuable packages, unhitched his last living horse and rode on to Virginia City, where he arrived nearly dead.

8. Wells Fargo was partially broken up.

Wells Fargo’s traditional role in the Old West slowly declined in the face of a changing technological and political landscape. In 1895, the company gave up the delivery of mail, ending its competition with the U.S. Postal Service.

The famous stagecoaches also declined more and more as the railroad networked throughout the West. The flexibility of the company is apparent, however, when one sees that by 1909, Wells Fargo had established 6,300 offices.

The company simply transformed itself so that by the early 20th century it was pushing for refrigerated train cars to transport meat to market, as well as expanding its growing banking business.

Still, the company changed forever when its banking and express divisions split in the early 20th century. In 1918, the federal government forced Wells Fargo and other express companies to form the government-run American Railway Express Agency (sometimes Company). This lasted until 1975.

Today, aside from museums and Westerns, the only reminder of Wells Fargo’s storied Old West past is the company’s now iconic stagecoach logo.